"The Ant Bully" is now available through HBO On Demand and HBO Go until December 18.

A boy, a wizard and a war--that's the basic formula for many children's adventure stories. In "The Ant Bully," as the name suggests, this story takes place in the insect world, but the bully is the boy named Lucas (voiced by Zach Tyler Eisen). This modest morality tale doesn't go for big laughs but does deal with situations that young kids will inevitably face.

Based on John Nickle's 1999 book by the same name, this 2006 feature was the first animated film produced by Legendary Pictures. "The Ant Bully" followed two better known 1998 ant-themed films: DreamWorks' "Antz" and Disney's "A Bug's Life." All three movies have messages, but are aimed at different audiences. 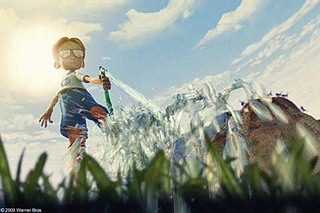 "The Ant Bully," rated PG for mild violence, is definitely targeted at young children--preteen kids who might feel powerless, so far outside of the adult world. In the movie, 10-year-old Lucas has no friends and is the target of the neighborhood bully. He turns his frustrations on the anthill in his front yard, causing the ants to scurry about when he floods the anthill.

Unable to explain his problems to his parents, Lucas is sullen and won't even say goodbye to his parents as they depart on a Mexican vacation, leaving him with his older teenage sister and his alien-abduction obsessed grandmother (Lily Tomlin). 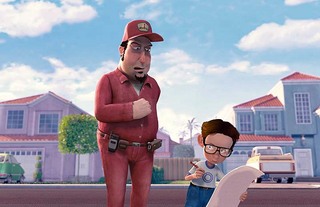 The local exterminator (Paul Giamatti), Stan Beals, plays on Lucas' feelings of powerlessness, convincing him to sign a contract. You know Stan is evil not just because he smokes a cigar and because his service is called "Beals-A-Bug" (a pun most children's won't get), but because only an evil adult would use humiliation to get a 10-year-old's signature and completely bypass the adult in charge. The humor here is puerile and slightly vulgar.

So where does the wizard come in? The wizard is an ant named Zoc who creates a potion that shrinks Lucas down to ant size. In this sequence, Lucas finds himself naked--or rather engulfed in his underwear, then lost in the white dunes of his sheet, and sliding down his bed into an open bag of potato chips. On the floor a small band of ants are waiting. True to Grandma's fears, Lucas is abducted, but not by aliens, by ants. All of Lucas' naughty bits are strategically hidden until he clothes himself like a miniature Tarzan. 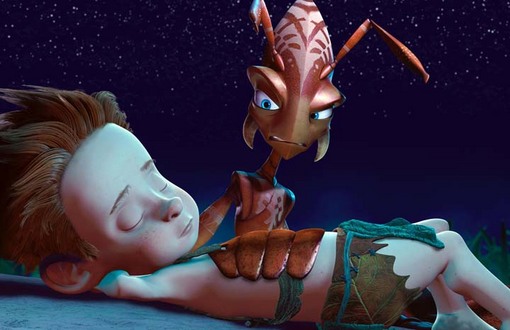 Zoc doesn't talk down to Lucas. None of the ants do because he's Lucas the Destroyer. Lucas is treated as an adult, but one who is totally ignorant of the ways of the tribal society of the anthill. Zoc wants to study Lucas and then eat him, but the Head of Council (Ricardo Montalban) has other ideas. The Queen (Meryl Streep) appears from behind butterfly wings and intones is an ethereal voice that Lucas must learn how to be an ant. 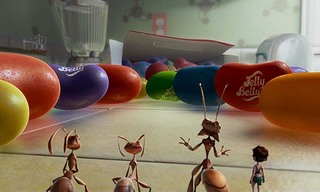 Zoc's girlfriend, Hova (Julia Roberts) takes charge of Lucas and one of Lucas' first tasks is to join ant kids learning how to forage. Under the guidance of their teacher Kreela (Regina King), two teams compete over an obstacle course that requires teamwork to get a sugar rock (jelly bean). For Lucas, not being an ant is a minor obstacle compared to his attitude.

Hova tells Lucas, that being an ant is "not always thinking about yourself first." The ants puzzle over human ways. When Lucas tells Zoc that in human cities some but not all humans work together, Zoc is puzzled because it's the "differences that make a colony strong" and that is "where ants draw their strength." 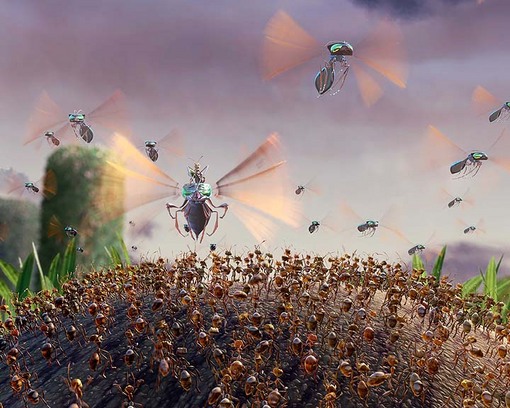 The ants use other insects as draft animals--caterpillars give them food and are ridden like horses, but wasps also covet the caterpillars. The wasps lead a raid upon the ants, but this isn't the only natural terror Lucas faces with the ants. There are also frogs.

Hova also teaches Lucas some ant lore--that the Great Ant Mother will someday return and give them endless bounty, but also the evil cloud breather threatens the entire ant civilization. The visualization of the ant colony's history, done like prehistoric cave paintings, is one of the most beautiful sequences. 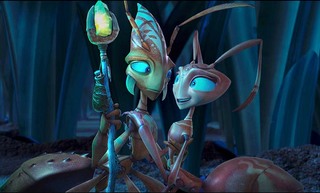 Nicolas Cage does a fine job inflecting heroism, cynicism and then tenuous friendship to Lucas. He's a wizard who's well-meaning and competent. No big laughs there. He has a good relationship with his girlfriend. Roberts' Hova is almost too good-natured to be real, if ant guardians could be real. The ants are noble while the human characters are flawed. If we wanted to go sociological, we'd consider this tale an example of the noble savage myth.

This movie suffers slightly in comparison to the other better-known ant animation movies. 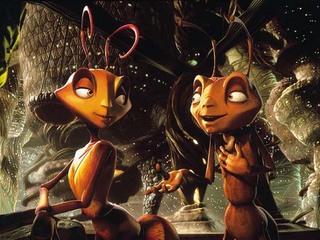 "Antz" was also the first animated film for DreamWorks and featured some big names as voice actors: Woody Allen as the non-conformist hero, Jennifer Lopez and Sylvester Stallone as his friends. The film was inspired by Aldous Huxley's 1931 "Brave New World," an adult novel not really about ants at all. In "Antz," a power-mad ant general attempts to take over a colony so vast, in a world so detailed that Roger Ebert felt comparisons to Star Wars were justified. The message is to think for yourself instead of following orders, and the banter is witty in a way that might zoom over children's heads.

This film got two thumbs up from Gene Siskel and Roger Ebert with Siskel listing the movie as one of his top ten for 1998. 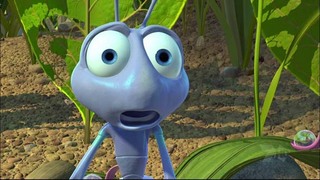 The Disney-Pixar feature, "A Bug's Life," was based on Akira Kurosawa's "Seven Samurai" and Aesop's fable "The Ant and the Grasshopper." There are no ninja bugs or turtles, and instead the ants are forced to give a food tribute to the warrior-like grasshoppers. The hero, Flik (voiced by Dave Foley), is an inventor ant who attempts to free the ants from this buggy serfdom but the mercenaries he finds are actually a third-rate circus troupe. Again, individualism saves the day, but "A Bug's Life" is more of a family film than "Antz." There's also a Disney princess of sorts. 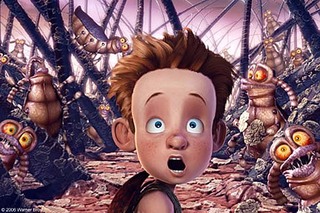 "Ant Bully" has an even narrower audience. The notion of death and physical harm isn't played for laughs (like in the old Roadrunner cartoons). Children under six might find this mild violence and some dark humor disturbing. Teens might find the portrayal of Lucas' self-involved cell phone gabbing sister too close for comfort and consider themselves too hip for the message as they are for younger siblings tagging along. Mothers might find themselves gasping in horror at the major saddlebags that Lucas' mother is drawn with. The ants are more attractive than any of the human characters.

Still, bullying has become a hot topic and this animation stresses socially positive actions as opposed to revenge and justified violence. 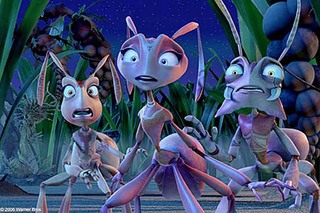 You'd probably want to avoid all three movies if you're an entomophobic, because it could inspire your kid to go buggy over bugs. That's not always a bad thing. Isn't that what got Charles Darwin started?

In all, "Ant Bully" is a charming little tale with a limited appeal, and the danger of needing a real exterminator if impressionable youngsters decide to gift the local ant colonies with jellybeans. 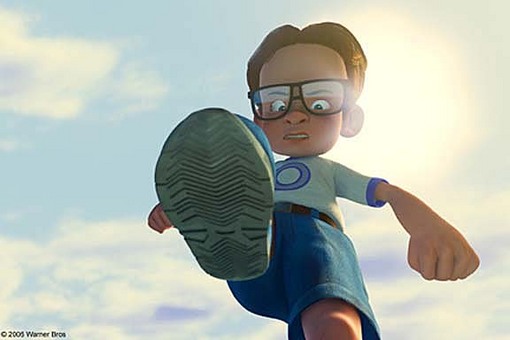 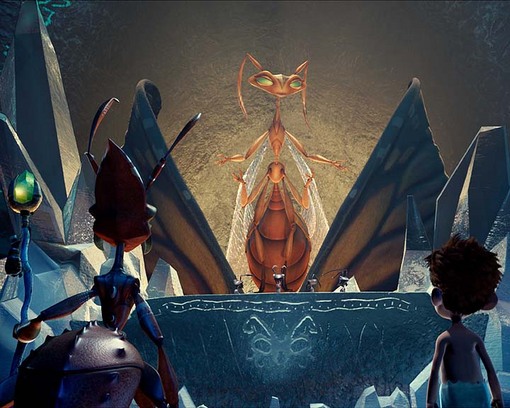 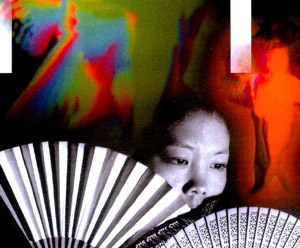