Could we finally be feeling the impact of programs like “The Wire” on network television? The best program currently on the Big Five networks, ABC’s “American Crime,” is a show that this season has drawn direct comparisons to HBO’s masterful drama. And now we have FOX’s ambitious “Shots Fired,” a show that directly tackles racial inequality in law enforcement and the relationships between cops and civilians, which are so often drawn along racial lines. Co-created and often written by the great Gina Prince-Bythewood (“Beyond the Lights”), and with later episodes directed by the legendary Jonathan Demme and Kasi Lemmons, “Shots Fired” comes with a certain artistic pedigree that almost instantly elevates it above other mid-season offerings. This show looks good, has sharp dialogue, and interesting plotting. Therefore, it’s a bit more disappointing when it falters, falling into clichés and the traps of network television more easily than I hoped it would. Having said that, the great cast and cultural relevance keep it interesting in ways that most current network TV isn’t. 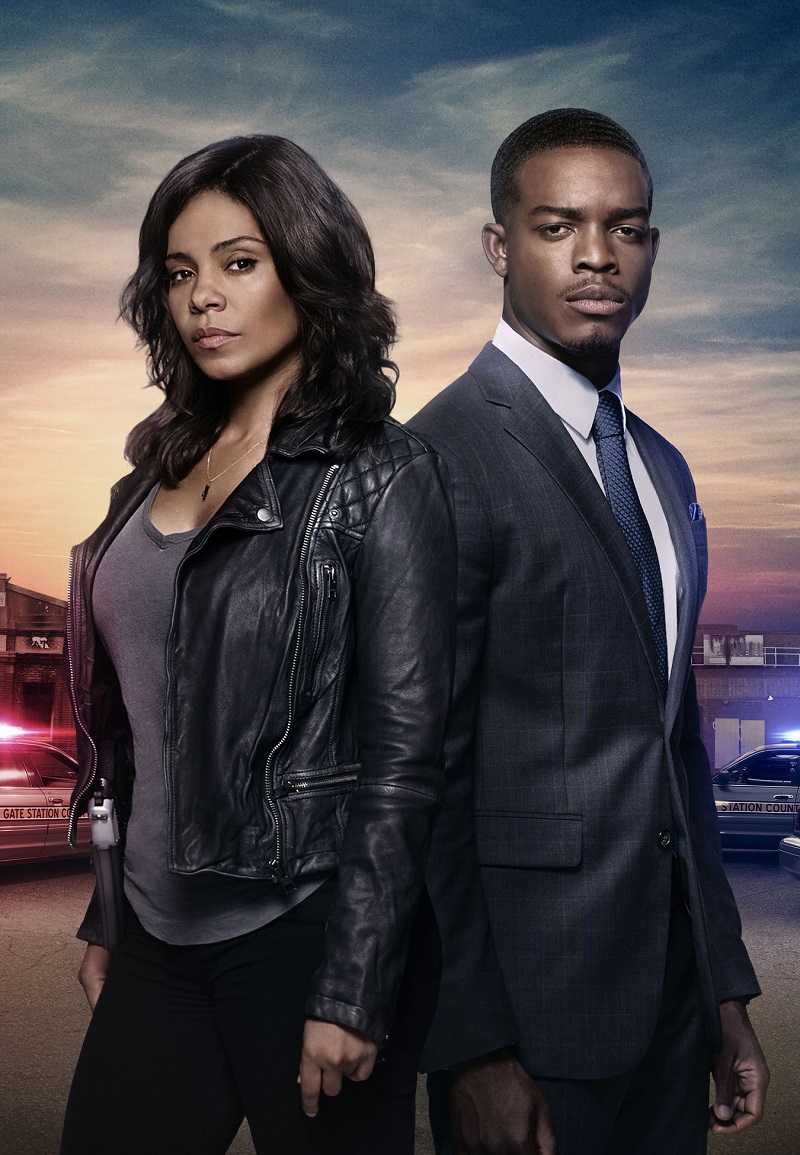 “Shots Fired” opens with a death. In one of the program’s most interesting conceits, we hear the shots from the bed of a passing truck, giving us little sense of what happened. We hear it and we see the aftermath through the rearview mirror, offering a nice analogy for how the world interprets violent events, from a distance and reflected. All we know is that Officer Joshua Beck (Mack Wilds) shot an unarmed college kid, who he will later claim was reaching for the officer’s gun. Joshua is African-American. The kid is white, but in a black part of town. A major investigation erupts into what the kid was doing there and why he was shot. Perhaps more interestingly, the community starts to wonder why this is becoming such a major story when the death of an African-American teen from a couple weeks earlier is being swept under the rug.

Heading the investigation into the shooting is a driven Special Prosecutor named Preston Terry (Stephan James of “Race”) and his assigned partner, Ashe Akino (Sanaa Lathan, reuniting with Prince-Bythewood, her director on the great “Love and Basketball”). Terry is one of those overly competitive young men, in no small part because his brother is a superstar NFL player, and so Terry works harder to get out of his shadow. Akino has her personal baggage as well, mostly related to a contentious divorce. As “Shots Fired” progresses, we get a bit of their personal lives mixed in with the developments of the case. While it’s nice to see a show that attempts to humanize their “Law & Order Team,” too many of the personal elements of “Shots Fired” feel forced and more soap opera-esque than needed. It’s rare for a critic to say this, but I wanted less personal drama from the leads just so the writers could focus more cleanly on the socio-political issues at play.

Prince-Bythewood and co-writer/husband Reggie Rock Bythewood tackle those issues from various angles, much like “The Wire” and “American Crime” dissect issues from different perspectives. So, we meet the police force that first rallies around Officer Beck, but then bail on him when a certain video goes viral, led by the gruff Lt. Calvert Breeland (Stephen Moyer). We even meet the Governor of North Carolina, Patricia Eamons (Helen Hunt), who quickly sees how this story could impact her political career in a re-election year. We also watch how the case impacts a real estate mogul named Arlen Cox (Richard Dreyfuss) and a local religious leader (Aisha Hinds), who may play a more direct role in what’s happening in her community than the detectives first suspect.

Clearly, there’s a lot going on in “Shots Fired,” and the talented team behind the show know how to keep it moving. It helps to have actors as talented as James and Lathan in front of the camera. They can easily carry what is essentially a procedural mystery like this one. However, we see some of the restrictions of network TV as the show progresses: episodes feel overcrowded with characters and subplots to such a point that the themes of the show suffer. Everyone says what they’re thinking, feeling, or have to do next; it’s loaded with exposition in a way it may not have been on HBO with a 60-minute runtime and without commercial demands. The result is a lack of nuance or subtlety, and it reminds one how remarkable “American Crime” is in that department. People often claim John Ridley’s show underlines its themes in aggressive ways, but it’s far more complex than it gets credit for being. And those who thought “American Crime” should be called “Important Themes” should avoid "Shots Fired" at all costs.

Having said that, it’s difficult to write “Shots Fired” off. The cast is great, the production values are high, the mysteries at its core are interesting, the social messages it’s playing with are important. If one wishes the overall picture was a little better, it’s only because of how much of this actually works. For years, TV creators have worked from some very common templates—“Hill Street Blues,” “St. Elsewhere,” “The Dick Van Dyke Show,” among many others—if “The Wire” becomes one of those templates, if we see multiple shows trying to address social issues by tackling urban systems, TV will be the better for it.