"You're taking this very personal..." 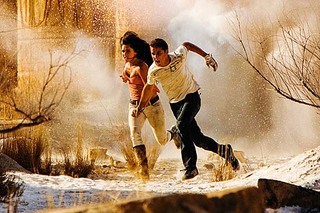 "Those who think "Transformers" is a great or even a good film are, may I tactfully suggest, not sufficiently evolved. Film by film, I hope they climb a personal ladder into the realm of better films, until their standards improve."

"Transformers: Revenge of the Fallen" is the "Dark Knight" of 2009. In what way? It's the pop-smash action picture that has excited a bunch of fanboys fans who don't usually read movie critics to howl with inarticulate rage about movie critics who don't like their movie. Of course, "The Dark Knight" was met with considerable mainstream critical acclaim, and "ROTFL" with equally considerable mainstream critical disdain, but the important thing to remember is: critics had nothing to do with making these movies hits.

Want to see critics made completely superfluous? Bestow upon them the magical power to predict box-office success. Instead of awarding thumbs or stars or letter grades, they can just provide ticket sales projections that can be quoted in the ads: "I give it $109 million in its opening weekend!" Voila! Instant redundancy, instant irrelevance. Why do you need critics to gauge grosses when you already have tracking reports, followed by the actual grosses themselves?

"It's not a critic's job to reflect box office taste," Roger Ebert reemphasized again yesterday. "The job is to describe my reaction to a film, to account for it, and evoke it for others. The job of the reader is not to find his opinion applauded or seconded, but to evaluate another opinion against his own." If a critic's verdicts do not roughly correspond to the grosses, does that mean the critic is out of touch with the audience? No. It means the audience for film criticism is -- and has always been -- a small subset of moviegoers, and an even smaller subset of publication readership. That's why I don't think reviews should be aimed at a mainstream movie audience, because they are not the mainstream audience for movie reviews.

An example: Let's take Time magazine, with a U.S. circulation of approximately 3.4 million -- just a smidge fewer than HealthyPet, but considerably more than USA Today (2.3 million), the Wall Street Journal (2.1 million) or the New York Times (1.1 million). How many of those 3.4 million read Mary Pols' trashing of "Transformers: ROTFL," which she likened to "the play date from hell"? Of those, how many do you think read the review before they saw the movie? How many changed their minds about the movie, deciding not to see it specifically because of her review? Half a million people? Fifty-seven thousand? Twelve? Might "ROTFL" have taken in few extra million, or an additional $84 at urban matinee prices, were it not for Mary Pols?

Or is it more likely that any particular review is just part of a whole constellation of opinions and influences vying for attention around the movie itself? Advertising, promotion, friends, in-theater crowd response, box-office reports, reviews -- all of them jostle your own opinions one way or another, before, during or after you've had your own encounter with the movie. The point I've been making since the 1980s (back when I was still in the under-30 demographic of most Hollywood studio-financed pictures) is that critics do not write for, or even reach, most of the general moviegoing audience. They write for the select few who want to read what a critic has to say about movies.

David Poland at Movie City News has a theory I like, and it comes down to this:

"Remember that when critics tell you a movie sucks, it is still up to you to feel how you feel and the criticism is not about you."

That's it right there. Most everything else is some version of: "Who does that critic think she is and why does she have a platform and I don't?" Well, you do -- much of the time right on the same page as the critic's own piece, in the reader comments. Or on your own blog.

As Scanners readers know, I'm also with DP when it comes to the bizarre emphasis of opinions over observations. I've noticed that when I've tried to detail specific criticisms (I won't mention the subjects, because then some people avoid addressing the issues by merely pointing out that I'm using the same person or movie as an example again, as if I believe mere repetition of a name or title will have some voodoo effect), it's not the criticisms they object to but the fact that those criticisms contributed to my not liking the movie so much. In other words, it's OK to have opinions, as long as they're not based on anything too concrete.

DP puts it this way:

I can't tell you the number of conversations I have had in which someone has agreed on everything that is "wrong" with a movie and they still liked or loved or paid for a second screening of that film. [...]

"Good" is a subjective measure and no one likes to be told they are WRONG for liking what they like. People will rationalize hysterically like a marlin at the end of a line, thrashing like crazy, figuring that eventually, the fisherman will tire out and they will go free.

But there are objective measures. And people who have seen and thought about a lot of films can -- sometimes even fairly -- explain what is right and what is wrong, often by comparing and contrasting to other films. But that fair determination of objective quality is not an insult to people who like it anyway. It is one kind of measurement. [...]

I recently got some hate mail. I call it "hate mail" because it said "I hate you." The correspondent described himself as a future filmmaker and said that I scare him because he believes I "demand perfection" and that someday I may judge him (or a film he made). He hadn't read much of what I've written (he asked why I "hate" Sam Mendes and Paul Haggis, then said he would "keep going through your blog just to find out") -- but it was interesting that he'd attributed an emotion/opinion ("hate") to me before exploring what I'd actually said. Again, opinion pre-empting analysis, when the former means nothing without the latter.

As somebody who isn't sure he's ever seen a perfect movie (OK, maybe "Chinatown") and isn't particularly interested in "perfection" as a core value in art or entertainment, I find it hard to recognize myself in what this fellow wrote. To me, "perfection" implies a kind of precision-tooled characterlessness that I generally abhor (see my recent post on Michael Jackson's music and dance, which I compared to the polished, producer-crafted movies of Jerry Bruckheimer).

I value and admire skill, competence, craftsmanship -- but not necessarily for their own sake. (If you lived through the 1980s invasion of the British window-dressers -- Tony and Ridley Scott, Adrian Lyne, Hugh Hudson, Alan Parker, and their American counterpart Joel Schumacher -- you know how soulless and superficial a certain brand of advertising-honed craftsmanship can be. Not that all their movies are bad, but what dazzles in one setting can be deadly dull in another.) So, perfection? I don't think so. Call me "nitpicky" if you will. That just means what bugs me is different from what bugs you. We all have our pet peeves.

Both DP and I are piggybacking on the Ebert piece I've quoted above, my favorite part of which is this:

Let's just say I started out with a lot to learn, and am still trying to learn as much of it as I can. There are people who know so much more about film than I do, it makes me all but weep with gratitude when they deign to speak with me. Two words: David Bordwell. That he speaks to everyone in clear and eloquent prose speaks for itself. It isn't that he "thinks he knows more than anybody else." It's that he does. It's like he happens to know a lot of interesting stuff, and is happy to share it with you.

What more do you want -- if you honestly want to read about and think about and discuss movies -- than that? Somebody who knows interesting stuff and is happy to share it. I like that guy. Even when I don't like the same movies he does.