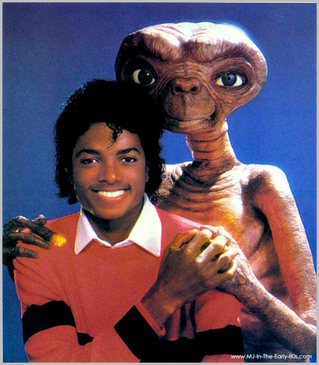 I saw "The Wiz" (1978) and I saw "Captain EO" (1986) and I never saw Michael Jackson the movie star. For the longest time, it seemed, he was supposed to grow up to become one, but it didn't happen that way. Not long after 1982's Thriller he began transforming into something almost unrecognizable, unphotographable -- something that allegedly had to do with Diana Ross, hyperbaric chambers and, perhaps, the Elephant Man's bones. Whether an illness or a form of self-mutilation, it was a shame. The appealingly handsome young man on the cover of Off the Wall and Thriller morphed (as in the famous "Black or White" video) into a synthetic science-fiction construction that could only have inhabited an artificial universe like those of his two best-known big-screen appearances. He still worked for large crowds on stage, but -- for cosmetic and psychological reasons we may never understand -- close ups came to seem like a very bad idea.

As alien and unreal as he presented himself by the mid-1980s, the one thing that seemed genuine about him was his damage. His music became as polished and mask-like as his visage, and equally devoid of mature emotion. It may have been pop music for theme parks, but it wasn't for adults -- and he didn't seem to want to be thought of as one.

After the news of Jackson's death yesterday, Chris Morris, the superb music critic, went back and took a look at Jackson's breakthrough pop-culture moment on the Motown 25 TV special, the flawlessly Fosse-esque "Billie Jean"/moonwalk number. He posted some notes on Facebook -- "Michael Jackson: Hollow Man" -- that speak eloquently about what touched and disturbed so many about Jackson as a performer. You may think some of it sounds mean, but I think Morris is getting at core aspects of Jackson's legacy and legend that have only begun to come into focus:

The first time you saw it - and I remember watching it that night - you exclaimed, "What the fuck was that?" The audience screamed in astonishment. But, looking at it today, it seems more mechanical than otherworldly. Jackson wows the crowd, but there isn't an instant of spontaneity in his entire performance. Every leg kick, spin, and outré terpsichorean innovation was calculated to astonish.

It was always easier for me to be boggled by the immensity of Michael Jackson's stardom than it was to be thrilled by his music. Even as an 11-year-old, when he burst onto the scene with the exuberant, perfectly tooled Motown single "I Want You Back," he sported a style that had a curious wind-up quality to it. He even then seemed to me a perfect pop creation, a human bangle devoid of an emotional core....

Soulless perfection has its charms, however, and in terms of sheer popularity Jackson became the nonpareil entertainer of his era. He was McDonalds -- "Thriller: 100 Million Sold." But there was always something that wasn't there. For all its sleek craft, his music felt stunted and arid; the gasps and squeals on his records played like a miming of real feeling. [...]

...Here was someone who was fundamentally retarded emotionally. It was obvious in his songs. "The kid is not my son?" What a masquerade.

I found in Jackson something frightening, not unlike my response to circus clowns, and it's not just his "Eyes Without A Face" appearance, but his Tom Cruise-like desperation to Be Someone -- Someone for whom he invented his own fantasy titles like "King of Pop." (How sad that was, when he issued a Bad-era press release demanding he be accorded the honorary form of address.) But that was just it: He wanted to be Somebody, but not himself, because he didn't seem to know who "Michael Jackson" was. He associated himself with showbiz stars in public -- Elizabeth Taylor, Liza Minnelli, Macaulay Culkin, little Emmanuel Lewis from "Webster" whom he used to carry around as if he were Bubbles the chimp -- which added to the impression that he was always appearing on a parade float, waving that sparkly white glove. He even became "friends" with fictional pop sensations, like E.T. Look at that poster. They sold posters of Michael Jackson and E.T., posing like buddies taking a vacation on Earth.

I love some of the early machine-tooled Motown records of the Jackson 5 (especially "ABC" and "I Want You Back," but also pop ballads like "Never Can Say Goodbye" and "I'll Be There"). "Don't Stop 'Til You Get Enough" was basically disco, but it may be the closest to pure joy the post-Motown Jackson ever got on record (or video). I even still get a kick out of "Billie Jean," though I was always a little embarrassed by the lyrics. It was a version of the same embarrassment so many would feel more acutely a few years later during the prolonged kiss with Lisa Marie Presley at the MTV Music Awards. It had to do with that disconnect between an image he seemed to want so badly to project... and what we were actually seeing and hearing. He wanted to be someone he was not, but who was the someone he could convincingly be?

Jackson said he only felt alive when he was performing. One way or another, he always was. I wish he'd been able to develop himself, and his artistry, into adulthood. But in the end this is who he was, a permanent case of arrested development.

It's no secret that Fred Astaire -- who during the 20th century was widely revered among all dance artists as its greatest dancer -- singled out the young Jackson for praise. But Astaire died in 1987, and it's hard to believe that he would have applauded the later Mr. Jackson without extensive reservations. Watch Mr. Jackson live at the Super Bowl halftime show in 1993, wearing his trademark dark glasses and ponytail with loose locks falling forward over the brow, starting out in quasi-military uniform, and you see he does everything the audience wants with skill, energy and almost no spontaneity. Even the anger seems synthetic now.

But to watch "Don't Stop 'Til You Get Enough" (1979) is to be amazed at just how much charm the 20-year-old Mr. Jackson had, and the charm gets more infectious as the dancing proceeds. You begin by noticing the pelvis, doing its characteristic pulsation, and you recognize how close you are to the world of John Travolta in "Saturday Night Fever." Fairly soon, you take in the heels, or rather the action of the insteps that keeps rhythmically lifting the heels off the floor, and then, in various ways, you see the ripple of motion between feet and those very slender hips.

But Mr. Jackson was an upper-body dancer too: there's a marvelous moment here when he tilts back and stays there. Now go to "Billie Jean" in Motown's 25th-anniversary celebration (1983). You can see that already everything is much more choreographed, both in the bad sense of unspontaneous and the good sense of dance structure. Most of the time his dancing is so aflame you don't feel any lack of freshness, and he's so alert that you hardly have time to laugh -- though I think you ought, happily -- at the way his busy pelvis keeps hoisting his pants up and revealing his off-white socks.

Watch the (pre-MTV) "Don't Stop" video and compare it to the post-Thriller stuff. It's the difference between a dancer (relaxed, expressive, fun, loose) and a pyro-technician.