You make the movie, you sell the movie 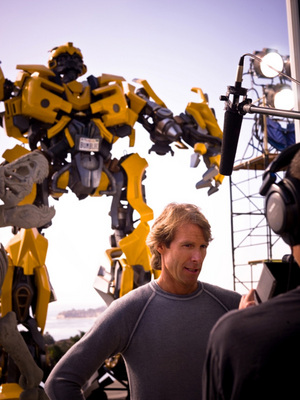 "I just think that the young filmmakers today should take advantage of the opportunities and technology that they have now, that I didn't have, or the generations before me. 'Cause now you have no excuse.... If you want to be a filmmaker, there it is." -- Spike Lee, interview with Digital Camera Magazine

The means of production and promotion are in the hands of filmmakers in ways they have never been in the medium's history. As Spike Lee, director and tube-sock salesman (anybody remember the campaign for "She's Gotta Have It"?) has said, there are no excuses anymore. If you want to make a movie and get it seen, the tools are right there at your disposal. You don't need massive studio resources and hundreds of thousands (or millions) of dollars; all you need is a video camera, a computer, some software and access to the Internet and you've got a whole vertically-integrated world at your disposal: production, marketing, exhibition. A few well-targeted e-mails, some YouTube clips, a Facebook or MySpace page -- even an old-fashioned web site -- and suddenly thousands of people know about you and your film. A service like Withoutabox allows you to enter film festivals all over the world in a jiffy, right from your keyboard -- without so much as a trip to the post office until you know if you've been accepted or invited.

Over many years of interviewing filmmakers I've often asked them how they have the energy to make a film once they've managed to raise enough money to go into production. And I've wondered how they have enough stamina to work on getting their films seen once they're finished. Specialized film publicist extraordinaire Reid Rosefelt is amazed by the power of new technologies, but asks: "What Happens to the Filmmakers Who Can't Market Themselves?" At his blog, Shake Your Windows, he writes:

I admit that I am also ambivalent about marketing, because I am someone who loves movies first and promotes them second. I don't want a director to tell me what a movie means. I don't want to be saddled with the director's insistence that the reason they made the film defines what the movie is. In a lot of ways, the reason that a director thinks he or she made a film is irrelevant. They may not fully understand themselves as human beings, let alone understand their movie. Mysterious things come into play that they don't understand. That's the miracle of it, really.

Some filmmakers are very skilled about how to play the game of talking to the media. They have a natural facility for giving great quotes without giving away the store. Some, like Jarmusch, have a strong image that works into the way you perceive their movies, expanding and not contracting your reactions. Some are a hoot, like Almodovar, and draw you in with their high spirits. Some invent their own myth out of whole cloth, like Herzog. Many of the people who last the longest in pop culture are shape-shifters, like Dylan, Madonna and Robert Redford--they are omnipresent, hiding in plain sight, and the more you think you know about them, the less you do.

But there are many great artists who lack this gene. With conventional distribution, if you don't have a talent for self-promotion, you can walk away and let the distributors and the publicists do the heavy lifting. You can have the benefit of advice, if you are willing to listen to it.

The question in my mind is whether Web 2.0 will increase the distance between the filmmakers who can sell themselves and those who can't.

Rosefelt is right that some filmmakers aren't good at promoting themselves, but that's always been true. Some don't know how to talk about their work, and some just aren't interested. Some are wary of consciously analyzing their own creative process, or detest the idea because they don't see it as anybody else's business. The film is the film and that's all there is to it. As Rosefelt writes:

Many of the best filmmakers are allergic to the idea of selling their films. They feel it somehow diminishes them as artists. They want to create; they don't want to be hucksters. They want their work to speak for itself. They sometimes act like they don't want to be successful, that there is something actually distasteful about success. Many have told me flat out that they are proud of their film but doubt it will reach much of an audience.

I worked on three films with a director long ago. His movies were funny, witty, stylish, and had a dazzling visual style. There were so many reasons why all kinds of people could enjoy them. But every interview he gave made them seem dry and boring; he cut off the possibilities for the way different kinds of people might perceive them. He was effectively an anti-marketer. It was pointless to talk to him about it. If I had run the distribution companies, I would actually have canceled all his interviews and appearances, but distributors want to see a sheaf of articles--that's what they pay for....

Web 2.0 technology isn't going to change anybody's personality. Filmmakers who can't sell their films -- and themselves -- one way or another are probably going to have a harder time finding an audience unless somebody else (publicists, critics, word-of-mouth) do it for them.

Not everybody can speak about their work with the passion and eloquence of, say, David Cronenberg or Ramin Bahrani or Werner Herzog. But not everybody has to. Do people really want to hear what Michael Bay or Uwe Boll or McG have to say about their work? I don't know. But if you're Michael Bay -- not that he needs more publicity -- you have other options, like appearing as a parody of yourself in TV ads. Or if you're Boll, you can challenge your critics to a publicity-stunt boxing match. Whether it's giving interviews (to Entertainment Tonight or Charlie Rose, RottenTomatoes or IndieWIRE, Cineaste or Rouge), appearing at film festivals, or parking an ambulance in front of the theater showing your heart-stopping horror movie, it's all showbiz, whether you like it or not.

UPDATE: To state the obvious (oh, why not?): We're talking about access and opportunity here. Whether in an interview, or in the film itself, there's no guarantee that a filmmaker will necessarily have something worthwhile to say. All the technology does is give her an unprecedentedly easy way to say it and make it available to others.