I labeled the above short film ("close up") a critical essay / dream sequence, which is what I intended when I made it last fall. But pretend you saw it at a film festival or a gallery and were told it was a "found footage" composition by a filmmaker whose influences include, say, Bruce Conner, Kenneth Anger, Stan Brakhage, Luis Bunuel, Jean-Luc Godard, Dziga Vertov, and/or Guy Maddin. Would you perceive it differently, whether you thought it was any good or not?

What if you were told that it was a meditation on the intersection of the actor's gaze, the camera's gaze, and the gaze into the mirror; of the movies that have been implanted so deeply in our heads that they become part of us; of the human face as blank slate and reflection of thoughts and emotions; of the skull beneath the skin and the vanity of the flesh; of subconscious metamorphoses and/or stream-of-consciousness Surrealist dream-imagery? A densely interwoven montage of images that requires annotation and explanation to fully understand (you know, like Eliot's poetry)? Or a Surrealist experiment in the vein of "Un Chien Andalou," using only silent footage, scored to a multi-tracked collage soundtrack composed of excerpts from two symphonies by Gustav Mahler and stock sound effects?

Two of my favorite films that pose direct inquiries into the question of "art" are Orson Welles' "F for Fake" and Alan Rudolph's "The Moderns." Each of them explores the idea of forgery, reappropriation: Does the artist's identity sanctify the work? If the work is by someone other than the ostensible artist, does that make it any less a work of art than one created by the artist to whom it is (falsely) attributed? On the other hand, when Van Gogh paints his copies of Velasquez, but in the style of Van Gogh, are those paintings "originals" or reproductions? And are they any good -- not as forgeries (which would "fool" no one), but as paintings in their own right? 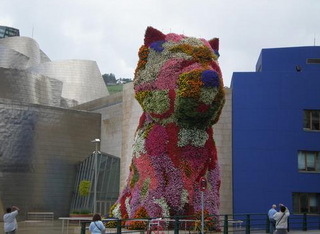 A piece in Sunday's New York Times Arts section (" Public Art, Eyesore to Eye Candy") raises some questions relevant to our discussion about the nature of art, and what can be considered art. For example, is a large reproduction of a puppy made out of metal, earth and vegetation a work of sculpture? It's not a topiary, more like a novelty planter on a massive scale. But it's also a piece of architecture. And a garden. Can gardens be art -- like, say, the formal grounds at Versailles (or Marienbad)? What about when Jeff Koons puts together (or has his assistants put together) a 43-foot tall stainless-steel framework holding 25 tons of soil and 70,000 plants,including Marigolds, Begonias, Petunias and Lobelias?

It was Mr. Koons's giant "Puppy" -- a West Highland terrier covered with dirt, planted densely with flowers and first shown 16 years ago -- that broadcast most loudly and clearly that public sculpture was neither an exhausted form nor necessarily a dumbed-down one. [...]

"Puppy" was intensely lovable, triggering a laugh-out-loud delight that expanded your sense of the human capacity for joy. It was a familiar, sentimental cliché revived with an extravagant purity, not with enduring materials like marble or bronze but with nature at its most colorful and fragile. The flowery semblance of fur made "Puppy" almost living flesh, like us. [...]

Ever since Jasper Johns's flags and targets pointedly addressed the viewer with "things the mind already knows," much, maybe most art has set out one way or another to reach a broader audience more directly. The welter of strategies began simply enough, with the elimination of the sculpture's pedestal and the siphoning of images from pop culture, and it now extends to the Internet. The revival of public sculpture is perhaps only the latest ripple in this continuing wave, but it is also the most public.

So, what do you want or expect from art -- movies, music, video games, comic books, painting, sculpture, literature, poetry... -- that makes it, well, art?

• An expression of creativity? Skill? (Can art be creative or expressive without representing much in the way of skill or craft?)

• The ability to stimulate your imagination, your senses, your intellect, your emotions?

• A transformation of the way you perceive or understand something about the world, or yourself -- to (literally or figuratively) see through someone else's eyes?

• Evidence of a personal vision or signature? And/orr the manifestation of a larger cultural, tribal, historical, political, religious context?

• An engaging or challenging experience? A contemplative one?

Can you describe why something (or some form) that does these things, or others, deserves to be called "art" (or even "great art") -- or is it like pornography and you just know it when you see it? (Ah, the eternal question... )

Now apply those criteria to a work of movie criticism and see what you come up with.

Next Article: What's your game, baby? Cinephile or cinemaniac? Previous Article: Yes, but is it art?