'World Trade Center': How political is it? 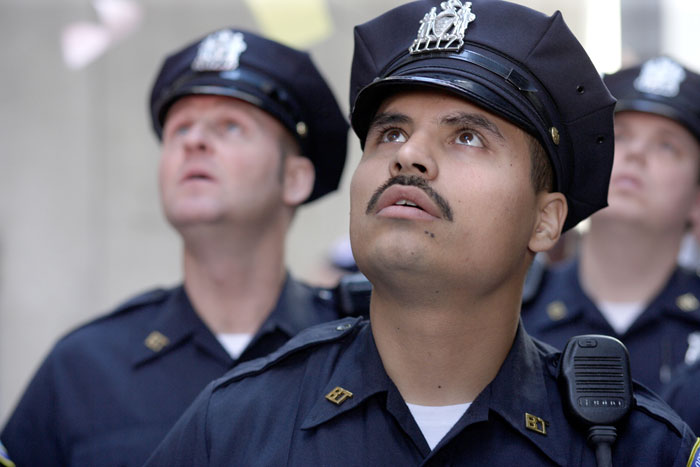 9/11 is in the eye of the beholder: Michael Pena (center) in "World Trade Center."

That's a question everyone who sees Oliver Stone's 9/11 movie will have to answer for him- or herself. The studio's official line is that it's an inspirational and healing movie ("The World Saw Evil That Day. Two Men Saw Something Else"), and that it's not political at all. But it's about 9/11, and no contemporary event has been more politicized -- beginning within moments of the attacks themselves.

Stone himself is quoted in the Chicago Sun-Times, sounding very political indeed:

"At the time, I thought we were overreacting," he says. "I've been through many disasters in my life. There was Vietnam. The Kennedy assassination, Watergate. The last presidential election. Sept. 11 to me was a national wound. It was one big murder job. But it plunged us into this homeland security state of mind.

"All I can say is that we had the sympathy of the world on that day. The rest of the world was with us. We had a right to pursue those murderers. We should have closed the circle. We didn't need more and more terror, Constitutional breakdowns and more pain. But those are only my opinions as John Q. Citizen."

I have to say I agree with Stone on this. I think history will show that the World's Only Superpower's overriding reaction of "Why us?" (going beyond righteous grief and shock and anger to a protracted and unseemly wallow in self-pity, as if we had the corner on victimization in the world) was one of our most shameful hours as a nation, and was, as we witnessed at the time, part of what sparked an anti-American backlash in record time of only a few weeks. If this was indeed a modern Pearl Harbor moment, we failed miserably in our response. I kept thinking of FDR, who made a stirring speech without resorting to overblown (and simultaneously reductive, picayune) language about "Evildoers." Stone actually makes Bush look good, and doesn't show how he went AWOL for most of the day, or how, when he did finally appear, he looked like a scared rodent in the headlights. That's something else about that day that we should never forget -- not that we could if we tried.

Richard Roeper, in his Sun-Times review recalls thinking of A-- C------ (The Coprophagic Thing That Shall Not Be Named) while watching "WTC" -- and, I confess, I did, too -- for the same reasons:

"These broads are millionaires, lionized on TV and in articles about them, reveling in their status as celebrities. ... I've never seen people enjoying their husbands' deaths so much."

-- Hatemonger Ann Coulter's assessment of some of the widows of 9/11 victims.

It would be my great pleasure to arrange for a screening of Oliver Stone's "World Trade Center" for Ann Coulter and some of the families whose loved ones were killed or seriously injured on 9/11. It could take place in New York, New Jersey, any place, any time, all expenses on me. All I ask is, after the screening is over and the lights go up, that Coulter should stand and face these families and explain to them why she believes they experienced anything but the most profound emotional pain on that day and on all the days that have followed.

Of course, Coulter will never go for something like that. That would take character and humanity, and she's an unconscionable pig.

My own take on "WTC" is at RogerEbert.com. An excerpt:

Stories of survival need to be told, and "World Trade Center" needs to be seen in perspective, as an early (five years later?) attempt to deal with a galvanizing tragedy in the lifetimes of many Americans. In ten years (or even next week), I don't know that this will be seen as anything more than an average TV movie about a not-so-recent disaster. "WTC" is not a definitive statement about 9/11, or one that is likely to make you see that day any differently than you do now. And there's nothing wrong with that. But I was reminded of what Stanley Kubrick said about "Schindler's List": "Think that was about the Holocaust? That was about success, wasn't it? The Holocaust is about six million people who get killed. 'Schindler's List' was about six hundred people who don't." That's perspective.

A closing voice-over states the movie's theme, to the effect of, "I saw good that day." And it's true -- catastrophe can bring out the best in people, more than they even knew they had in them, and 9/11 witnessed countless heroic, compassionate and selfless acts. But perhaps the most emotionally resonant moment in "WTC" comes in a passage after the collapse of the towers, when the movie flashes to televised reactions from all over the globe. It's a reminder that 9/11 also represents a missed opportunity. In addition to remembering the victims and the many who risked -- and gave -- their lives trying to help others, it's important to remember the intense, "We are all Americans" outpouring of grief and sympathy that united so much of the world on that day, and for just a few days or weeks afterwards, before politicians had reduced 9/11 to an election slogan. And it's a sad, terrible reminder of the enormous good we've lost in the five years since. Had we been able to build on those feelings, it would have been the most constructive and meaningful tribute to those who were killed, and to their families, and to those who survived. Maybe this is a political movie after all.