Why the Hell It's Funny Or Not, Part 2 or Possibly 3 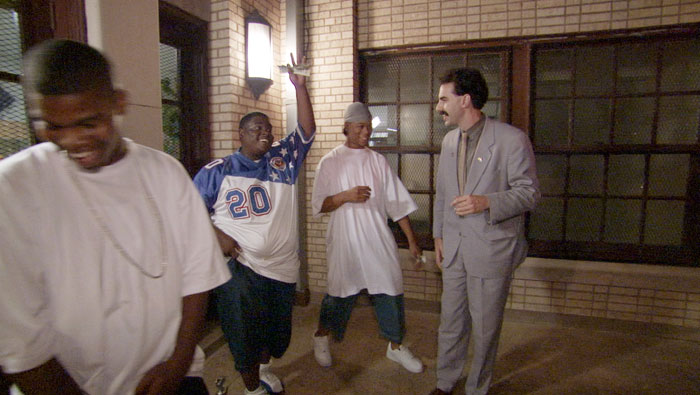 Here is Borat ridiculing people who are not in on the joke so that you can feel socially superior, according to Christopher Hitchens and David Brooks.

British crank Christopher Hitchens has been writing about Borat's Kazakhstan for years, only he calls it "Iraq." Still, it's an imaginary place in Hitchens' brain, like Kazakhstan in Borat's or Nicole Kidman in David Thomson's.

I do not read Hitchens much at all anymore because he's stuck in 2002 and can't get out. But Hitchens has a perspective on "Borat" that's worth mentioning. First, he quotes a dim-witted passage from a review in "London's leftist weekly," the New Statesman, in which the writer professes that "it's shocking to witness the tacit acceptance with which Borat's ghoulish requests are greeted. Trying to find the ideal car for mowing down gypsies, or seeking the best gun for killing Jews, he encounters only compliance among America's salespeople."

To which Hitchens replies:

Oh, come on. Among the "cultural learnings of America for make benefit glorious nation of Kazakhstan" is the discovery that Americans are almost pedantic in their hospitality and politesse. At a formal dinner in Birmingham, Ala., the guests discuss Borat while he's out of the room—filling a bag with ordure in order to bring it back to the table, as it happens—and agree what a nice young American he might make. And this is after he has called one guest a retard and grossly insulted the wife of another (and remember, it's "Americana" that is "crass"). The tony hostess even takes him and his bag of s__t upstairs and demonstrates the uses not just of the water closet but also of the toilet paper. The arrival of a mountainous black hooker does admittedly put an end to the evening, but if a swarthy stranger had pulled any of the foregoing at a liberal dinner party in England, I wouldn't give much for his chances....

Is it too literal-minded to point out what any viewer of the movie can see for himself—that the crowd at the rodeo stops cheering quite fast when it realizes that something is amiss; that the car salesman is extremely patient about everything from demands for p___y magnets to confessions of bankruptcy; and that the man in the gun shop won't sell the Kazakh a weapon? This is "compliance"? I have to say, I didn't like the look of the elderly couple running the Confederate-memorabilia store, but considering that Borat smashes hundreds of dollars worth of their stock, they bear up pretty well—icily correct even when declining to be paid with locks of pubic hair. The only people who are flat-out rude and patronizing to our curious foreigner are the stone-faced liberal Amazons of the Veteran Feminists of America—surely natural readers of the New Statesman.

I'll stop there for now. Hitchens' point is that "Borat" is something of a comedy of manners, and that what many are seeing as "shocking compliance" is simply politeness and an aversion to confrontation (particularly when there's a camera staring at you). On this isolated point, I think Hitchens is generally correct and the heinous, America-hating leftist is generally wrong. But I wonder if Hitchens (or the other guy) can see that one accurate observation does not make all others invalid. Hitchens' mistake -- a fallacy he indulges endlessly in his writing -- is in thinking the one thing he deigns to mention is all that's going on.

In today's NY Times there's an article about the ways people behave to cope with intrusions into their "personal space." That's what Borat is doing, too -- though it's not the only thing he's doing -- and, yes, their discomfort of the perplexed can be funny. It always has been.

As for the bull-in-a-china-shop -- er, Borat-in-an-antique-shop -- scene, if you don't understand what's going on here, you've never seen a motion picture comedy. Perhaps the greatest example is the Mr. Muckle scene in W.C. Fields' 1934 "It's A Gift," where Fields does his best to keep a cantankerous old blind man from bumping around and destroying everything in his shop. Is this a joke at the expense of old blind people? I think not. Is it a joke at the expense of the innocent, milquetoast shop-owner, who is trying to be polite? I doubt it. The joke is about a catastrophe waiting to happen... and then happening. It's about expectations, anticipation, timing, and an impotent struggle to keep the worst from occurring while making sure it does.

It's not as gut-busting, or as protracted, as the now-famous wrestling scene, but as A.O. Scott wrote of that instant classic: "This had nothing to do with Kazakhstan or America or 'cultural learnings' of any kind. This was, the display of skin notwithstanding, one of the oldest jokes in the book: a tall, skinny man and a short, fat man fighting. A no-brainer. The dumbest kind of dumb show. And, therefore, a brief — actually, an almost unbearably long — reminder of a glorious tradition." That's right. Much of my affection for "Borat" is rooted in cinephilia -- my love for classic American screen comedy: Fields, Buster Keaton, Laurel and Hardy, the Marx Bros., Preston Sturges... (Sacha Baron Cohen's countryman, Charles Chaplin, is also an influence -- but I'm not such a fan.)

I've said it before, but Borat is an agent of chaos in the anarchic spirit of the Marx Bros. He combines Groucho's insults with Chico's goofy foreign accent -- not literally -- and Harpo's lust-driven physicality. Only the villains get really angry with the Marxes; everybody else, even the romantic leads in the earlier, funnier Paramout films, just gets mildly flustered and then tries to move on as if nothing out of the ordinary had occurred. If you don't recognize that movie-comedy convention, then perhaps you won't recognize what's going on in Borat, either.

Like the insufferably patronizing, binary-minded David Brooks, for example, who writes about "Borat" in the New York Times today, calling the character a snob and a bully -- part of "the rise of culture-war comedians [like Jon Stewart and Bill Maher] whose jokes heap scorn on the sorts of people guaranteed not to be in the audience." Brooks begins:

And so we enter the era of mass condescension. Thanks to the creativity of our cultural entrepreneurs, we enter a time when we can gather in large groups and look down at our mental, social and spiritual inferiors.

Advertisement
To Brooks, the "genius" of Cohen's Borat is

sycophantic reverence for his audience, his refusal to challenge the sacred cows of the educated bourgeoisie. During the movie, Borat ridicules Pentecostals, gun owners, car dealers, hicks, humorless feminists, the Southern gentry, Southern frat boys, and rodeo cowboys. A safer list it is impossible to imagine.

Cohen understands that when you are telling socially insecure audiences they are superior to their fellow citizens there is no need to be subtle. He also understands that any hint of actually questioning the cultural suppositions of his ticket-buyers — say by ridiculing the pretensions of somebody at a Starbucks or a Whole Foods Market — would fatally mar the self-congratulatory aura of the enterprise.

I agree Brooks's list is a "safe one" (that's why I pointed out Borat's "good liberal" treatment of blacks and gays), but he sure hasn't been exposed to much comedy. The anti-PC ridicule of pretentious Starbucks-quaffing, Whole Foods-shopping yuppies has been a modern comedy staple for years, from the espresso-ordering scene in Steve Martin's 1991 "L.A. Story" to Austin Powers (Dr. Evil's headquarters was at Starbucks) to Christopher Guest movies (especially "Best in Show") to The Onion to "Frasier," "Will and Grace," "The Daily Show," "The Colbert Report," "The Office," "South Park" ... Where has Brooks been? (Answer: Making up fake opposing categories to stick people in. Brooks is the author of "Bobos in Paradise" -- as in "Bourgeois Bohemians." You know, Starbucks customers.)

Upper-class pretensions have always been a target for comedy -- but I suppose Brooks hasn't seen Keaton's "The Navigator" or the Marx Bros.' "Animal Crackers" or "A Night at the Opera." (Brooks evidently didn't see the scene with Hitchens "stone-faced liberal Amazons of the Veteran Feminists of America," either.) Indeed, Borat makes a point of poking fun at keeping-up-with-the-Jonses social-status ambitions when complaining about his rival next-door neighbor in Kazakhstan, and bragging about his triumph in acquiring glass windows and iPods: "Great success." These are among the very few times in the movie where you laugh at Borat and with him at the same time.

Both Hitchens and Brooks appear to have thought "Borat" was funny, but don't feel comfortable with that feeling. Laughing appears to have been a sin that requires some sort of confession. I have a feeling they would say the same things about Christopher Guest or Coen Bros. movies -- that they are about mocking, ridiculing, tearing down the characters so that the audience can feel superior. It does not seem to have occurred to either of them that it might be possible to laugh at -- even mock -- someone, while still feeling sympathy or even empathy. And that such feelings, as opposed to sheer derision, make the comedy even funnier. Did they not cringe with, and for, the dinner guests, or the car salesman, or the feminists, or the ettiquette coach (who, unflustered, held her own admirably no matter how hard Borat tried to make her break)? I suppose that lack of empathy is their loss, but it's not the movie's fault.

Cohen also knows how to rig an unfair fight, and to then ring maximum humiliation and humor out of each situation. The core of his movie is that he and his audience know he is playing a role, and this gives him, and them, power over the less sophisticated stooges who don’t. The world becomes divided between the club of those who are in on the joke, and the excluded rubes who aren’t. The more tolerant the simpletons try to be toward Borat, the more he drags them into the realm of anti-Semitism and vileness. The more hospitable they try to be, the dumber they appear for not understanding the situation.

I've already explained above why this (incredibly condescending) interpretation of "Borat" misses the mark. Is Borat's humor really based on ridicule of rubes who are "not in on the joke," or making audiences feel they are socially superior to the people on the screen? What's so terribly funny about that -- and why does Brooks assume that's the only "joke" to "get"?

Hitchens and Brooks agree, it's all another manifestation of the rudeness and crudeness of Young People Today.

Hitchens: "As far as one can tell, most youth culture is as inarticulate and illiterate and mannerless as Sacha Baron Cohen made it out to be [on "Da Ali G Show"]..."

Brooks: "There’s also that distinct style of young person’s snobbery. Young people haven’t accomplished much yet so they can only elevate themselves by endlessly celebrating their own superior sensibilities."

Yeah, surely that must explain why "Borat" is funny or not.