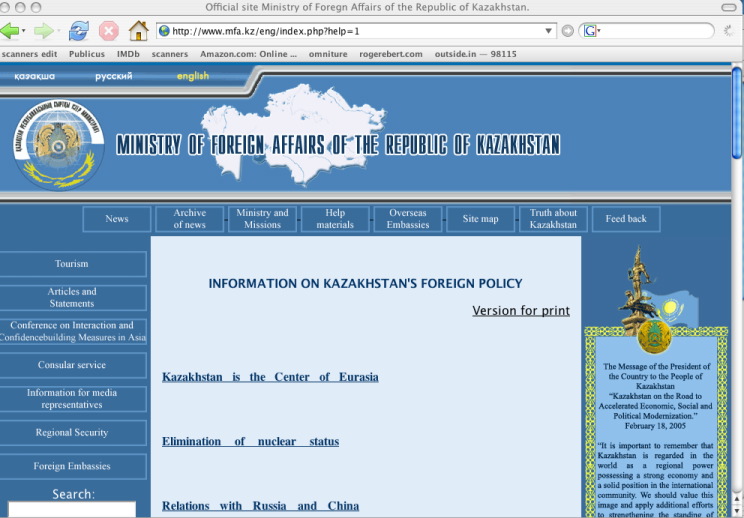 Jagshemash! If you are confused about the difference between the fictional Kazakhstan, homeland of Borat Sagdiyev, as portrayed in "Borat: Cultural Learnings of America for Make Benefit Glorious Nation of Kazakhstan" and the former Soviet Socialist Republic in Central Asia, why not visit the Official Web Site of the Ministry of Foreign Affairs of the Republic of Kazakhstan? Here you will find a FAQ and other helpful resources, from which you will learn that potassium is not even listed among Kazakhstan's major exports:

Also, if you like America but are confused by the portrayal of the fictional one in "Borat: Cultural Learnings of America for Make Benefit Glorious Nation of Kazakhstan," you can visit the Official America Web Site and learn about the land of Premier George Walter Bush, where you will discover that "Mainstream Media Reports Inaccurate." Also, there is this from Imperial Leader Bush: "We have a plan for victory in Iraq.... And I know the people of Montana can count on Conrad Burns to make sure our troops have all that is necessary to do the jobs I've asked them to do." This is the difference between the fiction America and the real one, if you can't tell. Conrad Burns from Big Sky Country will finally make sure our troops get what they need to do the job Bush has asked told them to do in Iraq! (And wasn't he the dad on "Diff'rent Strokes," too? Amazing fellow!)