Whose fingerprints are on 'Touch of Evil'? 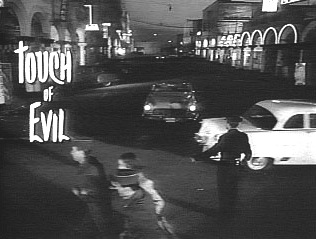 C. Jerry Kutner's contribution to the Contrarianism Blog-a-Thon ("Why Murch's 'Touch of Evil' Doesn't Make the Cut!") is generating some discussion over at Bright Lights After Dark. You should look into it.

As it turns out, I wasn't the first person to object to Murch's version in print. Someone who commented at our blog noted that:

Chris Fujiwara covered some of this ground on the late, lamented, Hermenaut. And after reading Fujiwara, I agree with him about Murch's intercutting Susie's first encounter with the Grandi's with a scene between Vargas and Quinlan: "One wonders whether if Welles had been allowed to recut the sequence as he wanted, he might not have struggled with it only to conclude that the Susie scene played better uninterrupted." - Another reason not to like the Murch cut!

The specific changes that were made [from Welles' memo] are detailed by Laurence French -- though oddly no mention is made of the recropping -- which I consider to be the Murch cut's most unforgiveable flaw.

Advertisement
I've read that "Touch of Evil" was shot "open aperture" (as many films are) at the standard "Academy ratio" (of 1.33:1 -- or 1.37:1 for sound films, from about 1932 through 1953) even though the "intended" ratio when projected may have been 1.66:1 (mostly a European standard) or 1.85:1. The latter format was used for the 1998 "Touch of Evil" DVD which, Kutner argues, chops the top and bottom off Welles' carefully composed full-ratio 35mm images. Normally, if a 1.85:1 film is improperly projected at the standard ratio, filling the screen from top to bottom, one usually sees boom microphones protruding into the upper part of the frame and other indications that one is seeing things that weren't intended to be seen. That's how you know it's the projectionist's fault, not the filmmakers'. But this was never the case with "Touch of Evil." (Stanley Kubrick ["Eyes Wide Shut"] and James Cameron ["The Abyss"] are among the directors who, it is claimed, have composed at least some of their video-era films in wide screen and "full screen" ratios simultaneously, so the image would fill pre-16:9, non-HDTV television screens without losing anything.)

Indeed, in a May 24, 1958, letter to the editor of the New Statesman of London (reprinted at the bottom of French's second page), Welles writes:

There was no attempt to approximate reality; the film's entire 'world' being the director's invention. Finally, while the style of TOUCH OF EVIL may be somewhat overly baroque, there are positively no camera tricks. Nowadays the eye is tamed, I think, by the new wide screens. These 'systems' with their rigid technical limitations are in such monopoly that any vigorous use of the old black-and-white, normal aperture camera runs the risk of seeming tricky by comparison. The old camera permits use of a range of visual conventions as removed from 'realism' as grand opera. This is a language not a bag of tricks. If it is now a dead language, as a candid partisan of the old eloquence, I must face the likelihood that I shall not again be able to put it to the service of any theme of my own choosing.

As I read this, Welles states his clear preference for the "old black-and-white normal aperature" over the "new wide screens" that were introduced in the 1950s (along with new widescreen processes such as VistaVision, CinemaScope and the like) -- and with regard to "Touch of Evil" in particular. The question (as one correspondent has posed it) was whether Welles really thought he could get away with making a 1:33:1 picture in the late 1950s. But even if he didn't, he knew the prints would retain that ratio. And the 16mm prints shown by universities and film societies were full-frame. So, he must have known that the film was being seen that way before he died in 1985. I wonder if either of the early versions of "Touch of Evil" was on VHS or laserdisc by then...