Where the Mopey Things Are

Spike Jonze's "Where the Wild Things Are" (aka, "The Decline and Fall of the Wild Thing Empire") is not Maurice Sendak's "Where the Wild Things Are." It's only fair you should know that in advance. The book's illustrations and nine sentences have been turned into a surprisingly (some might even say shockingly) literal-minded 90-minute motion picture about the misery of being a kid. Jonze and co-scenarist Dave Eggers are clearly in touch with their inner-miserable child; they seem to vividly remember all the daily turmoil that childhood is heir to -- the tantrums, fights, scrapes, bruises, fears, anxieties, insults, hurt feelings, bossiness, cruelty, rejection, confusion, heckling, bullying, bragging, pouting, moping, testing, haggling, crying, rage...

Those aspects of childhood trauma are acutely and accurately portrayed in the movie. Every time the fun starts, somebody goes too far (like a puppy who hasn't learned his soft mouth yet), and someone gets hurt or scared or angry or sad or all of those things. The movie's adulterated sensibility is that of an alienated grown-up looking back at the (somewhat romanticized, over-intellectualized) misery of childhood and denying or downplaying the equally real fun stuff -- the in-the-moment joy, the exhilaration of being and imagining and doing and playing. So, in some sense it's a corrective to all those stupid "Isn't it wonderful being a kid?" movies that remember childhood through equally distorted rose-tinted lenses.

Parents who spend all day dealing with their kids' bickering and fleeting, unpredictable emotional outbursts will immediately recognize the verisimilitude of Jonze's "Where the Wild Things Are," but you can't really blame them if they don't want to sit through it. Again. Or take their younger kids, who won't necessarily be frightened but will likely wonder why everybody is so morose. Especially the Wild Things, who aren't so much wild as the very opposite: neurotic, overgrown, overanalytical, dysfunctionally domesticated. They don't need a fake boy king, they cry out for group therapy.

That's the source of my ambivalence about the movie as a whole: It's so transparently a narcissistic adult's diagnostic reinterpretation of childhood ("Will you keep out all the sadness?"). Tempestuous feelings don't just pass over and through these kids (I'm including the Wild Things as big kids -- more in a moment), as they do with most children of Max's age (that is, of the age when they still wear soiled hooded terrycloth animal peejays). Torments aren't soon forgotten, abandoned for more pleasurable activities; they hang around all day like wet blankets, wrung out, mulled over, discussed, overanalyzed, brooded upon. There's a preciousness to the film that treats commonplace childhood agonies (and they are agonizing in the moment) as something "special." One of these days, the movie seems to say to itself, you'll look back on your childhood and remember the torture you went through on your way to becoming... an artist! (A filmmaker, that is. And a writer.)¹

The problem is not that it's so "dark" or "adult," just that it's emotionally monochromatic, leaving out almost everything else. Most kids can handle more real-world "darkness" than adults are comfortable with. Your kids may not have any problem instinctively understanding that this movie is about the rotten stuff in their everyday lives. They may, however, regret that seeing it left them feeling so bummed afterwards. But then they'll move on to something else. 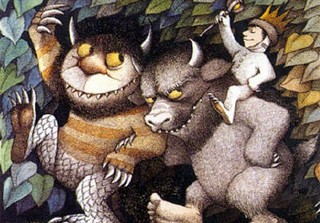 Maybe you remember the Sendak book. The mischievous boy Max gets rambunctious, out of hand, yells "I'll eat you up!" at his mom, who sends him to his room without supper. He sails off to where the Wild Things are, and proclaims himself their king, proving his worthiness by staring them down. They go on wild rumpuses, and Max sends them to their rooms without supper. Then Max gets hungry and lonely and decides to give up his royal position to return home, where someone loves him best of all. The Wild Things cry, saying they love him so much they could eat him up. When he gets home, his supper is still hot.

In the movie, Max (Max Records) is not punished by an adult for any of his wild behavior. His mom is one of those wishy-washy, boundary-less parents who encourages him to tell her stories and probably thinks of him as her best friend. He plays with her feet when she's trying to work, and she seems to think it's cute. His absent dad (no explanation) has left him with a globe bearing a "Scarface"-like inscription, telling Max the world is his. His older sister doesn't pay enough attention to him, and his mom (that's the great Catherine Keener) has a date (Mark Ruffalo) over for dinner one night. Max gets jealous when mom won't come up to see the fort/spaceship he's built in his room. He doesn't just ferociously growl, "I'll eat you up!" -- he actually bites her on the shoulder. He doesn't get sent to his room, he runs away (filmed so that you expect him to get hit by passing traffic). When he gets home, there are no repercussions. His soup is still hot. He doesn't fall asleep first, his mom does.

That's a really different story, but obviously Jonze and Eggers had to do something to stretch nine sentences into 90 minutes. The book (in modern child-rearing language) was about Max using his imagination during a time out, working through some boundary issues and struggling to pull himself together after he's allowed himself get too far out of control. The movie is about Max doing whatever he wants, including biting his mom, and getting away with it unscolded. It's all OK, Max, whatever. There are no rules or limits on your behavior. Nobody cares what you do. (In a few months, this Max will start torturing small animals as a cry for help...)

Ah, but the Wild Things -- the physical fact of them as realized on the screen -- are so wonderful and amazing that I wondered if the filmmakers just figured they didn't need much of anything else to justify their movie. They're almost right, too, except that these incredible beasties behave like they're clinically depressed so much of the time that even they become a drag to hang out with after a while. Everybody's so listless, and so sensitive.

As living creatures, however, they're fantastic to behold. You can tell that they are biologically related to little kids and big dogs who rarely bathe. From their matted fur, runny noses and goopy eyeballs down to their canine foot pads and claws, they are so meat-and-hair real you can almost smell them. (There's a real physical intimacy to the, too: When one of them hides Max in her mouth, he finds himself in a womb-like sac that appears to be made out of slimy '70s shag carpeting, and he's not the slightest bit grossed out.) It's as if somebody took the latex foam creations of H.R. Pufnstuf, made them flesh and bone, and then threw dirt clods at them. The Wild Things live outside (or in "houses" that are really spherical forts made out of sticks) and sleep in the comforting (but nearly asphyxiating) safety of piles. Nearly everything they do has some direct correlative in Max's home life, including the messy sleeping pile that almost crushes him the way his front lawn igloo did when his sister's friends jumped on it and smashed it during a snowball fight when he was taking refuge inside.

In the movie, unlike the book, the Wild Things have individual names and personalities. Max's best bud (the one most like him) is Carol (voiced by James Gandolfini -- an effortlessly masterful performance), who also has problems with his temper and his desire to bite. He lives with several others, including the kvetchy Judith (Catherine O'Hara -- genius, as always) and somnambulant Ira (Forest Whitaker), Carol's birdlike best-friend/appendage Douglas (Chris Cooper), the introverted goat-like Alexander (Paul Dano), and KW (Lauren Ambrose), who's been taking off on her own a lot recently (just like Max's sister) to hang out with a pair of owlish creatures named Bob and Terry (after former longtime Warner Bros. heads Bob Daly and Terry Semel) she thinks are a lot cooler and more interesting than her own clan.

I can't say enough about what splendid creations these Wild Things are, in appearance and vocal characterization. The few moments when the movie approaches unfettered joy are when it allows them to let loose and rumble with Max: the beginning of a dirt-clod fight (even after the hurt feelings of choosing up sides, but before the wounded pride and physical abrasions that come from actual dirt clods), or tumbling down a sand dune, head over heels. The problem is, the Things are not Wild at all. They present no danger to Max, and when they say they might eat him up (as a threat or a term of endearment), we don't believe it for a millisecond. They offer therapy without risk.

So, although I found much to admire and appreciate in "Where the Wild Things Are," I was also perplexed at what a downer the movie is. (The anemic Karen O. indie™ songs don't help.) It makes sense, I guess, that a skateboarder and "Jackass" producer would direct a film that gets such a kick out of down-and-dirty physical reality. But how did he manage to leave out the fun?

¹ As I said in reply to a comment below: The movie practically wears a bumpersticker that says: "I'm Proud of My Extra-Sensitive Child." It privileges Max's pain -- as if every kid doesn't go through it one way or another.