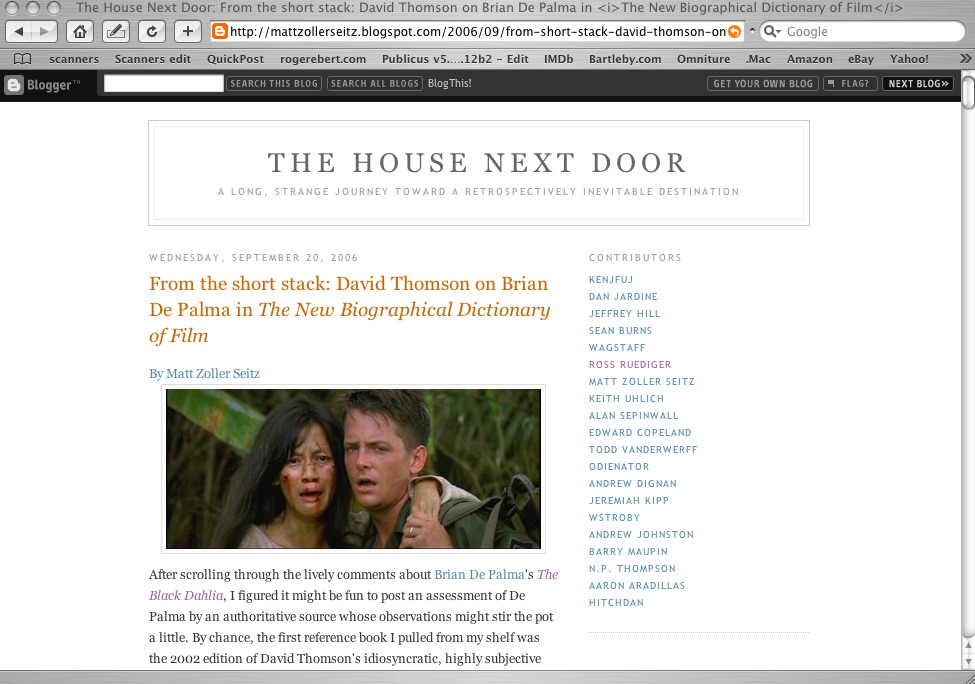 I feel strongly that film, and film criticism, are two sides of the same coin, each essential to the experience of the other. Without both sides, the coin itself couldn't exist in three-dimensional space (and certainly wouldn't be worth anything!). If movies are just forgettable eye exercises, patterns of light and shadow and sound that have no artistic or psychological or cultural significance, then what is there to analyze or criticize? And if the unexamined life is not worth living, then I don't see how the unexamined film is worth watching.

Last Saturday, I was supposed to have been on a panel called "Why Film Critics Matter" at the Port Townsend Film Festival in Washington State, organized by Kathleen Murphy. And I would have been, if it hadn't been for a scheduling misunderstanding. As it turns out, I was still in Toronto. But I sent Kathleen some thoughts to share on the panel, and I'd like to share 'em with you, too. This e-mail was composed after a lunchtime conversation with one of my favorite movie bloggers, Girish Shambu, and what we talked about was still reverberating in my head, so I want to thank him for his substantial contributions to this train of thought:

It's Friday, I'm still at the Toronto Film Festival which winds up this weekend, and I just got back from lunch with Girish Shambu, a movie blogger based in Buffalo, NY. I'd never met Girish before -- I've known him only through his blog, and the community of bloggers who contribute to critical discussions of movies on one another's sites (including my Scanners blog) -- and I've never been more excited about the future of film criticism than I am at this moment.

First, let me explain what I mean by "film criticism." In traditional, mainstream print media (mostly newspapers and magazines), it is usually thought of as reviewing. Newspapers run their critics' reviews of movies that are entering theatrical release in their local market. This is the most common, and narrowest, definition of what "film criticism" can be -- part consumer guide (a recommendation on a binary or sliding scale from positive to negative), part reportage (what the story's about, who's in it, who directed it), and, if you're lucky, part film appreciation (how the movie functions as an assemblage of images and sounds).

The limitations of this approach to film criticism are obvious: It is monolithic, one-way communication from a writer to a mute and invisible audience, written under the assumption that the writer has seen the movie and the reader hasn't. The number of people who get paid to write such reviews are very few, which means there's a limited range of voices. And how can you really get into and explore a film -- a complicated effort involving thousands of choices and decisions over a year or more of its makers' lives -- in a few column inches, without destroying for the reader the process of discovery that's essential to any experience of a movie?

Also, reviews are more or less limited to discussing just ONE movie at a time, which is no way to talk about film as a living form -- artistic, industrial, political, cultural... Movies are neither made, shown, nor seen in a vacuum. They are not museum pieces, even though some may wish to isolate them from contemporary culture and give them sanitized treatment in the name of "art." One movie is never just one movie, but a prism through which you can view, well, basically everything in the world. I enjoy exploring the relatively self-contained world of one movie (and, above all, I'm an advocate of the , but context is crucial. Although Roman Polanski's "Chinatown" is, I think, a perfect and self-contained film -- you can't fully understand it without some knowledge of, say, the phenomenon of film noir, and private eye fiction, and the history of land and water use (embodied in the film by the real-life Department of Water and Power) in Southern California and so on...

So, for me, reviewing is the crudest level of film criticism -- just one basic building block in the edifice. There are critics who can elevate it to an art, but the form itself is by nature extremely narrow and limited in scope. You would hope that a film critic, or reviewer, brings a broad knowledge of the history and traditions of film, to what they write, but that's not often the case. But we all bring our experiences and knowledge to the viewing of a film -- including what we know about all the other films we've seen, books we've read, subjects we've studied, ideas and conversations we've had, and so on. Where I think the best film criticism begins is with one person's deeply personal exploration of a movie or movies.

And that's why the most exciting place for film criticism, and an informed film community, these days is on certain Internet blogs -- where each individual blogger can write in detail (with digressions and tangents into other areas of related knowledge) -- but that is just the beginning of the conversation, since others can post comments, continue the discussion, and elaborate upon the original post. The blogger also has the opportunity to clarify, refine, and move the discussion into a fruitful direction. These are knowledgable, personal voices -- much more fun and distinctive and interesting than most of the edited and sanitized stuff that appears in "professional" outlets -- written mostly by people who are doing it for the love of the medium, rather than because they're getting paid to. As Girish put it today: I feel like we're all little Manny Farber termites carving out our own paths through the cinema.

Let me be clear that I'm NOT talking about celebrity or showbiz gossip sites, or places like the infamous Ain't-it-Cool-News, where freaks and geeks and frat boys post, mostly under pseudonyms, about drafts of scripts they've read or test screenings they've snuck into or rumors they've heard. (The mainstream media, including the Los Angeles Times, has been heading in that disastrous direction, too.)

I'm talking about blogs like Girish and Sergio Leone and the Infield Fly Rule, and The House Next Door and Like Anna Karina's Sweater and No More Marriages! and Lost in Negative Space, just to name a few -- places where the bloggers themselves write about their obsessions, what they know and whatever they want, when they want. They respect their readers (with spoiler warnings, for example) -- and the readers themselves respect each other in the reasoned comment-section discussions that are ignited. For any film critic, this is the ideal audience -- a bunch of people who are smart, well-informed, passionately interested, who actually go and see the movies for themselves, and then come back to read and respond to what you and other readers have written. (You can find an ever-growing list of links to my favorite critics and professional bloggers in the right-hand column of Scanners.)

One more thing about the whole idea of film criticism as writing: Written language is perhaps not the ideal medium for discussing film. (To me, film has always seemed closer to music -- patterns of images and movement and color, than to literature or theater or any other art form, and that can be hard to capture solely in words, sentences and paragraphs. Maybe "dancing about architecture" is a good idea...) I've been experimenting with different kinds of film criticism on my blog, and (going back to 1998) on my web site, Jeeem's CinePad -- using images and layout to create ways of exploring film that are not limited to linear text. On CinePad, this includes a whole section devoted to various motifs in David Lynch's "Twin Peaks," and "The Dark Room" (still unfinished), an image map built around a composite movie photo, where you click on various items in the room -- a cigarette, a hat, a dead body -- to find an essay about the significance of these elements and images in film noir; or a multi-part exploration of the use of Plumbing in Cinema as a powerful metaphor. On Scanners, I've been hosting the Opening Shots Project, encouraging readers and other critics and filmmakers to send in detailed descriptions of their favorite opening shots (accompanied by actual frame grabs from the movies), and to explain how these shots work to set up the movies, or how they relate visually to the journey the movie takes.

I saw a movie in Toronto called "The Pervert's Guide to Cinema," in which a philosopher, psychoanalyst and cinephile named Slavoj Zizek takes a 150-minute Freudian and Lacanian journey through a whole bunch of movies -- concentrating mostly on Hitchcock, David Lynch and Andrei Tarkovsky, but also pulling in "The Matrix," Charlie Chaplin and "Eyes Wide Shut," just to name a few. What he does has the feeling of a stream-of-consciousness improvisation, in which his mind wanders through these films, finding connections and reverberations. He even appears to step into the movies at times -- either on a set or by visiting an actual location where a film was shot. It's a beautiful example of one direction film criticism needs to move into -- idiosyncratic, educated, impassioned explorations not of an individual film in isolation, but of all of cinema.

It's this stream-of-consciousness, improvisational aspect of blogging that I find most liberating and enlightening. For me, writing isn't just about communicating, but also about discovering. I admire people who can write disciplined, elegantly structured essays and stick to their point, but I'd much rather have the experience (as a writer and a reader) of beginning with one idea and then finding myself going off in directions (or on digressions) that I hadn't anticipated. (I feel the same way about watching movies.) That, I think, is where the real critical trailblazing is done -- where we have the informed curiosity and freedom to wander from the beaten path.