What I learned from Johnny Caspar... 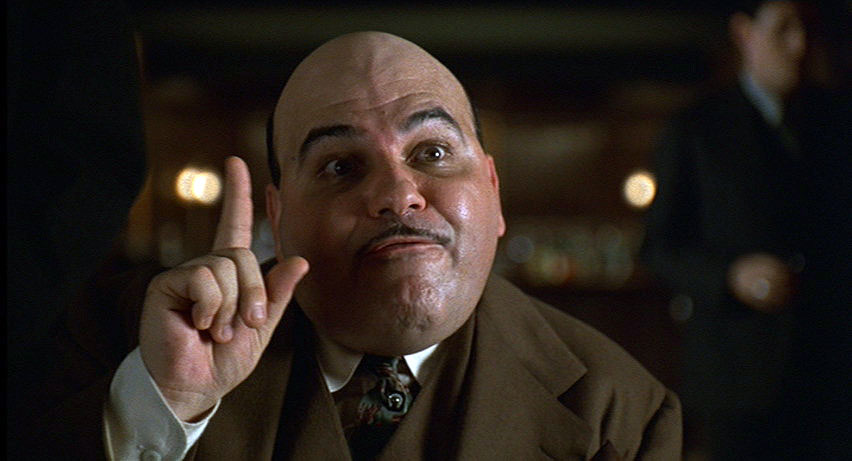 The first of Johnny. (Notice the indistinct image of Tom making his entrance in the background.)

Every single time I shave I think of Johnny Caspar. I can't help it. And it's not just because I love the obnoxious little character. And the actor who plays him, Jon Polito. Or that I think "Miller's Crossing" may be the greatest motion picture of the last 20 years. Or that it's among my lieblingsfilme.

It's because this one thing Johnny Caspar says near the end of the picture makes sense. I've tried it, and I don't notice any difference, but it seems like it oughta work. It's also the last thing -- a relatively trivial piece of practical advice -- that he utters in the movie, making his exit rather poignant, even for such a repulsive character.

Here's the way Joel and Ethan Coen describe it in their script (though it's not exactly this way in the movie):

... the car pulls into frame to stop at the curb [in front of the Barton Arms apartments] with the camera framed on the driver's window. The driver has a small bandage on his left cheek. We hear Caspar's voice as we hear him getting out the back:

CASPAR Ya put the razor in cold water, not hot--'cause metal does what in cold?

We hear the back door slam and Caspar appears in the front passenger window.

As Caspar walks off, the driver slouches back, pulls his fedora over his eyes and folds his arms across his chest.

Now, art has taught me a great deal about how to live life (or how one should, anyway). But it's also passed along innumerable little (and not so little) bits of pragmatic knowledge. What are some of these kinds of things you've learned from the movies? Some people might say that "Psycho" (1960) taught 'em how not to take a shower, but that's not what I mean. I mean advice about the real world. Give us the character (and/or actor), the title, and the tip you picked up...