Vatican cautions against pantheism on Pandora

Can you stand one more "Avatar" post? We've talked about the CGI, the design and palette, the politics, the ins and outs of shooting in 3D... but you can blame this one on the Vatican:

[Much] of the Vatican criticism was directed at the movie's central theme of man vs. nature.

[L'Osservatore Romano, the Vatican newspaper] said the film "gets bogged down by a spiritualism linked to the worship of nature." Similarly, Vatican Radio said it "cleverly winks at all those pseudo-doctrines that turn ecology into the religion of the millennium."

"Nature is no longer a creation to defend, but a divinity to worship," the radio said.

Vatican spokesman the Rev. Federico Lombardi said that while the movie reviews are just that -- film criticism, not theological pronouncements -- they do reflect Pope Benedict XVI's views on the dangers of turning nature into a "new divinity."

I don't know why a "Vatican spokesperson" is speaking up about a science-fiction movie (remember when Pope John Paul II went out of his way to condemn Jean-Luc Godard's "Hail, Mary"?). But I find Lombardi's take on "Avatar" an interesting one. The tale is so fundamental (mythic or simpleminded, depending on your point of view) that it has been praised and attacked from all sides -- as a racist "White Messiah Myth" (by David Brooks), and as anti-imperialist, anti-colonialist, anti-captitalist, anti-military... you name it. (Salon blogger Dragonfly says it's not anti-military but is anti-capitalist, a perfect illustration of the dark side of capitalism, which is "that people are often greedy, unfeeling bastards who will harm and exploit anyone they can for increased profits. Without oversight from some higher authority, they will trash the environment, exploit workers for every last cent, and screw their customers in pursuit of the almighty dollar.") 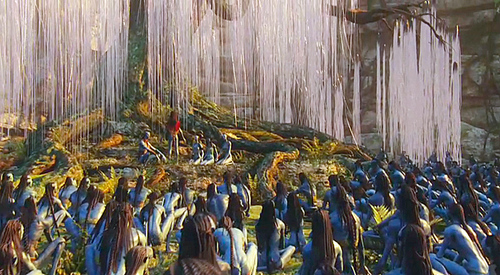 But the Vatican Rev. may have a point. The planet of Pandora is entirely literal -- every aspect of its nature is visually illustrated for all to see. This is why Rhys Southan, in a brilliant (enlightening, illuminating, downright bioluminescent!) letter to RogerEbert.com argues that the film is less pantheistic than simply a portrait of a world in which faith is irrelevant:

Native Americans had to be creative and spiritual to see the connectedness in life the way they did. Europeans, after all, interpreted the world a little differently. But on Pandora, the connectedness of life, the sacredness of the forest and the existence of a benevolent higher power are all impossible to miss. The Na'vi aren't creatively interpreting their world: they are merely acknowledging the obvious.

In other words, there is no spiritualism to the Na'vi. Their beliefs would be fantastical on Earth, but on Pandora every single one of their convictions are borne out by physical facts. Even the Earthlings and their Earth tools are able to prove the scientific validity of Na'vi claims.

The Na'vi are strict rationalists, but in heaven. Their world is so naturally magical that they don't have to believe in anything they can't actually see. And they don't.

The Na'vi get to have the easy part of religion -- the comfort that life is meaningful and death is not the end -- and they don't even have to do the hard part, which is to take a leap of faith.

No wonder Jake Sully wants to join them. I'm jealous too.

Perhaps that's what the Vatican spokesman is actually objecting to -- not that "Avatar" encourages the worship of God in/as nature, but that it visualizes a world of materialism, devoid of any metaphysical dimension?

Ultimately, Mr. Vallini said, "the movie doesn't provoke many emotions," and its observations about militarism, imperialism and the environment "are just sketched out as themes."

"It is Cameron's narrative choice," he continued, "as he is aware of the fact that the visual aspect widely compensates for this lack."