Why one critic won't see Avatar: "What, am I a forest animal, unthinkingly hypnotized by shiny objects?"

It has been argued that there are some movies you just have to see so that you can have an opinion about them. I have, on occasion, bought this line of reasoning. But after more than 30 years of seeing almost everything that was released (for professional reasons as much as personal ones -- I was curious), I now sometimes exercise my rights and freedoms as a consumer of popular culture and admit when I'm just not interested. In a short piece on True/Slant called "Why I won't see Avatar," noted critic Michael Atkinson explains why, based on what he's seen and read, he doesn't believe James Cameron's particular brand of fantasy film is worth his time:

Not only is the story recycled garbage and the script (reportedly, even by fans) idiotic, but the very essence of the film -- its visual cataract of fantasy -- is infantile. What, am I a forest animal, unthinkingly hypnotized by shiny objects? Oooo, I'm building a nest, I need something bright and pretty. Am I a toddler in the cereal aisle, blindly drawn to the box of Froot Loops because of the bright colors?

Since when is a flush of rainbow hues and sparkly art supposed to engage the adult mind? You read David Denby's review of the film in The New Yorker... and you hear a grown man -- who's written books -- try to explain that the film is stupid but he just loved the shimmering Crayola colors anyway. Maybe he'd like a mobile above his bed.

I've seen "Avatar" already, frankly, because I spent my youth looking at Roger Dean album covers and sci-fi/fantasy paperback covers and the art of Frank Frazetta, Chris Foss, the Brothers Hildebrandt, etc. -- and that was a good 30 years ago. But since then, something happened: I grew short hairs and read Hemingway and had sex. There's no going back. 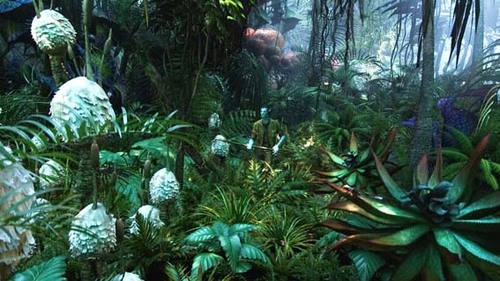 Although I made some similar points (a little more tactfully) immediately after seeing the film (before we had any evidence it would become another "Titanic" popular phenomenon), I'm not quoting Atkinson to "pick on" the movie of the hour, which is perfectly capable of looking out for itself, but to ask, honestly: If Atkinson doesn't want to see the movie, isn't that OK? He doesn't have to review it, admits he doesn't want to see it, and says what he doesn't find appealing about what he's seen and read about it. So, that's one less person in line, right? What's wrong with that? Yes, maybe he crosses a boundary when he suggests that nobody over 15 should (or would likely) be interested in a movie with this candy-colored visual design, but mostly I think he's speaking for himself. After all, he is not required to find "Avatar" entertaining or impressive any more than you are required to find him funny. Did you run right out to catch "The Squeakquel"? Aren't there movies, popular or not, that you really don't want to spend time with?

(If you feel like it, see my previous posts on how the de-colorized look of the "Flags of Our Fathers" trailer and the campaign for "Precious" put me off -- although I eventually saw both.)

I'll admit right now that after I saw the trailer for Peter Jackson's "The Lovely Bones," then saw a tweet from a critic who'd seen the movie uncannily confirming my own feeling that its vision of the afterlife looked like an antihistamine commercial, I became significantly less interested in seeing it.... I'm not saying I'll never give it a try, but let's get real: I just discovered that Sam Fuller's 1963 "Underworld U.S.A." is available on Netflix Instant, and with my TiVo I can watch it in great quality on a nice big HD screen. Yeah, I've seen it before, but not for 30 years. And I know it's worth watching. Priorities.

P.S. In fairness, I should point out that Atkinson has nothing against entertainment for children that can also be enjoyed by adults. (I think he's saying the much-discussed Smurf/Tinkerbell look of "Avatar" is an insultingly infantile vision of what constitutes fantasy.) Anyway, he has a sincere appreciation of "It's the Great Pumpkin, Charlie Brown" (1966) here:

Still, the cartoon's greatest single passage, and arguably the most mysterious and magical sequence ever animated for TV, is Snoopy's vivid journey through the night battlefields and barbed-wire trenches of WWI, a flight of brain energy making concrete for us finally what we knew as children, and what the single-minded Linus is too rebellious to realize: play is realer than real, and can set us free.