The eyestrain I got from watching James Cameron's "Avatar" reminded me why I think so-called "3D" cinema is still a cheap-looking gimmick that hasn't improved since the View Master was introduced at the 1939 New York World's Fair. Upon returning home from the movie I wrote:

[Each] layer looks flat, stacked in front of or behind some other layer. So, people for example look like cardboard cutouts rather than rounded figures. What's worse, if the camera's depth of field holds something out of focus in the foreground or background, you can't do anything about it. If you look at something that's closer or farther away, your eyes have a natural tendency to bring it into focus. 3D camerawork frustrates that instinct. Regular old 2D imagery, on the other hand, does not trick your eyes into trying to focus on something they can't, because both eyes are always looking at the same plane. All around, fewer headaches.

Martin Anderson has since published a piece at Shadow Locked called "How to avoid getting a 3D headache while watching Avatar," discussing the problem of stereoscopic photography and illustrated with 2D examples from Hitchcock and Ridley Scott:

Checking out the 'circle of confusion' in Avatar is literally quite a headache, and counterintuitive to our enjoyment of the 'baked and locked' 3D planes that we are being presented with. Knowing that depth-of-field is all he has to play with if he's not going to shoot rocks directly at us, Cameron doesn't hold back -- he relentlessly racks focus in scene after scene.

So the trick to avoiding a headache when watching this movie is to be obedient, and concentrate on the parts of the shot that the focus tells you are 'important'. Once I understood this at the preview screenings last week, my headache began to clear up, but I was conscious too of the effort of having to 'zip over' to the next point of rapid-focus in order to keep up and preserve the 3D illusion.

But some of us find the "illusion" annoying and unconvincing. One Shadow Locked commenter says he walked out after 20 minutes, in part because he found the blurry backgrounds and details frustrating: "Why would you want to spend $380 million dollars on a movie, with every infinite detail included just to have it out of focus?" Another commenter writes: "Long and short, there is no learning 'how to watch' 3D cinema, there is only learning how to create 3D films that accommodate the projection system and the realities of binocular vision to achieve lessened psychosomatic effect." 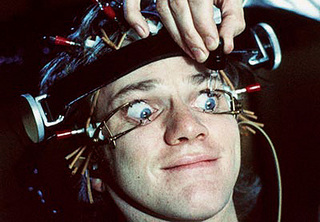 I certainly don't mind a director or cinematographer directing my attention to one thing or another in the frame. That's part of their job. I do object to them taking over the natural functioning of my eyes so that I feel like Alex undergoing the Ludovico Technique in "A Clockwork Orange," strapped into the chair with his lids propped open and forced to stare in one direction only. That's usually the sign of a limited directorial imagination (or a fascist dictatorial style). But 3D narrows a filmmaker's options in this regard. As Anderson says, until more sophisticated technology is developed that can actually present more subtle visual planes that we can focus on at will, "cinematographers working under the system may have lost a useful dramatic tool on the altar of 3D movies."

If Cameron is truly serious about wanting to revolutionize certain kinds of motion picture experiences, he might want to get to work on tackling that challenge.

P.S. The image modified for the article above is presented unaltered below. Wonder why anybody might want to look into the background at left? 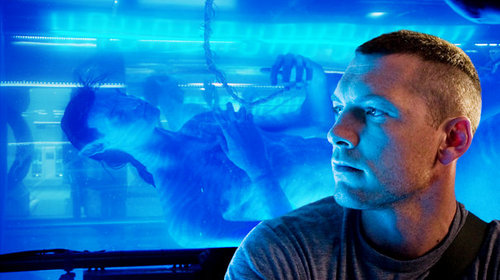