To the moon, Stanley!

Conspiracy theories and confirmation bias in film and photography:

Stanley Kubrick faked the Apollo 11 moon landing. The Newtown massacre and Boston Marathon bombings were "false flag" government conspiracies designed to take away our guns. Also, black is white, rich is poor, Obama is a foreign-born Muslim, work is freedom, freedom is slavery and Mona Lisa was a man.

I've always been fascinated with why people insist on believing weird things. (Michael Shermer wrote a whole book about it: "Why People Believe Weird Things: Pseudoscience, Superstition, and Other Confusions of Our Time.") In most cases it's not necessary to refute those beliefs themselves. All you need to do is examine the flimsiness of the thinking behind them. Don't waste time speculating about sketchy, erroneous media reports in the aftermath of a crime (those are inevitable). Ask instead how those discredited rumors and reports lend any credence to the existence of a vast government conspiracy.

When faced with a choice between facts and feelings, our natural inclination is to believe what we want to believe. Astrology or psychic experiences, racist fantasies or Holocaust denial — they all stem from the same warped, delusional thought processes, usually driven by insecurity, paranoia and a desire to exert control over events that make the believers feel impotent, frightened, angry.

Of course, there's a world of difference between religious beliefs (based on faith) and rational ones (based on empirical evidence). Both have their places, but it's dangerous and destructive to confuse one with the other. The scientific method, for instance, is a rigorous procedure that subjects its findings to endless re-evaluation, not a religious substitute; and there are facts about religions (such as the origins of biblical texts) that are not disputable, regardless of whether you believe those scriptures were divinely inspired.

As Brother Sam (Yasiin Bey, f/k/a Mos Def) says in season 6 of "Dexter": "We don't have to believe in the same thing, but you got to keep an open mind. You may say I can't prove that God exists, but [science] can't prove He doesn't." The trouble, as he implies, comes from people either not knowing, or being unwilling to admit, that they don't know what they don't know. A belief based on a guess or a whim is always wrong — because it's simply based on chance. (If intuition tells you that the roulette marble will land on 28 black and it does, that doesn't make you "right"; it just makes you lucky — unless you cheated and had some way of knowing in advance that the game was rigged.) 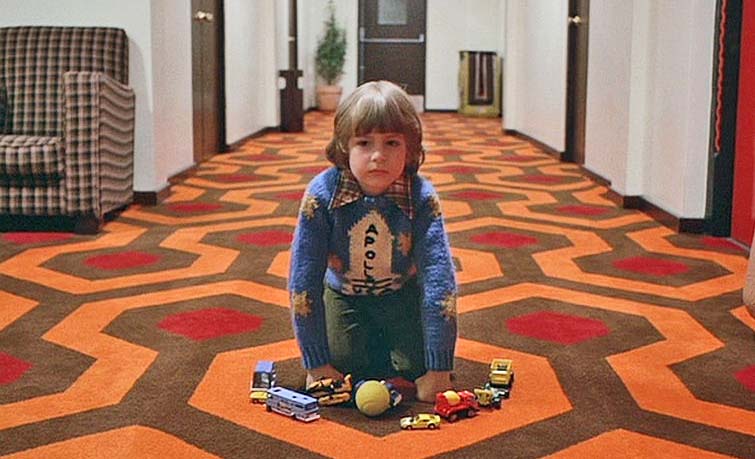 Which brings us back to "Room 237," a movie I reviewed for RogerEbert.com and the Chicago Sun-Times a few weeks back, and one of the "theories" it puts forward: that "The Shining" (1980) contains secret messages from Stanley Kubrick about how he'd faked the Apollo 11 moon landing video we saw on TV in 1969. Jay Weidner, the proponent of this theory in the film — as well as a whole bunch of other conspiracies — says on his web site:

"Whatever ideas are the most suppressed are most likely to be the closest to the truth."
— Weidner's First Law of the Universe "

"The only people who call conspiracies 'theories' are the conspirators."
— Weidner's Third Law of the Universe

These "laws" illustrate the critical thinking skills behind Weidner's ideas. I won't get into his reading of "The Shining" here (for that, see the aforementioned review), but in the video below, SG Collins explains why he can't prove that Neil Armstrong and Buzz Aldrin didn't walk on the moon in 1969 (something Weidner doesn't contest), but he can prove that the televised images of them couldn't have been faked: "Did people go to the moon in 1969? I'm not totally sure; I wasn't on the moon then. Did they fake going to the moon? No. I'm pretty sure they didn't. Because they couldn't."

Among the elements conspiracy theories and other forms of "magical thinking" have in common are the logical fallacies of "affirming the consequent" (interpreting observations to support conclusions they don't, in fact, necessarily support) and the "argument from ignorance (claiming that something that hasn't been proved false is evidence that it must be true).*

You can see those processes at work in another kind of conspiracy theory that operates on a more personal scale. In a piece on Salon that generated a lot of discussion last week ("Pictures of people who mock me"), a Memphis photographer named Haley Morris-Calfiero wrote about posing for pictures in public in an attempt to capture people making fun of her because she's fat. Like the theories related to "The Shining" above, you can call this a "self-fulfilling prophecy" or "confirmation bias" or "motivated reasoning" — and I have no reason to doubt that she's been cruelly humiliated in public because of her obesity — but the photos themselves don't show conclusive evidence of that. They capture an instant, and can be interpreted in a number of ways. 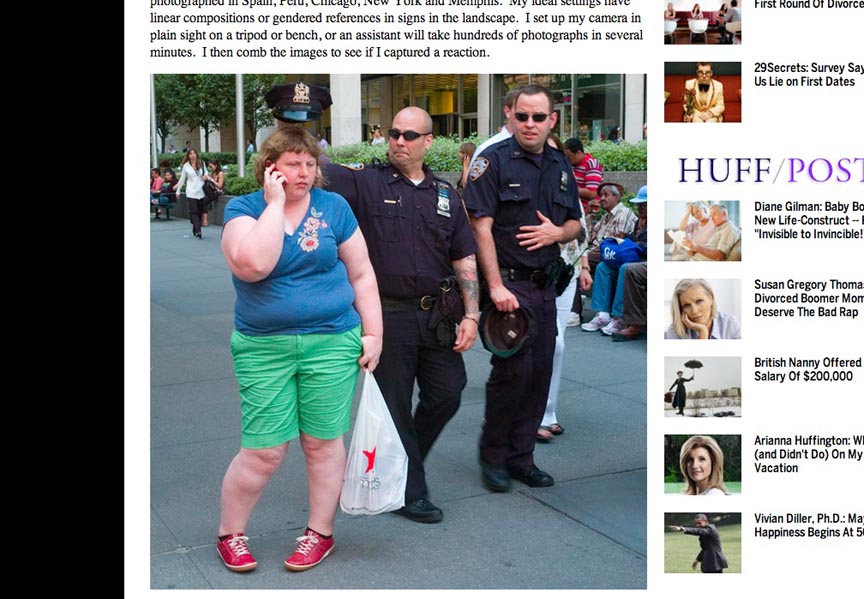 One shows a pair of cops coming up behind her as her assistant prepares to take her picture. Now, maybe one officer was mocking her (and her corpulence?) by placing his cap over her head as he walked by. Or maybe he saw that a photo was about to be snapped and impulsively photobombed her in good fun. Is he being mean? Is he reacting to her weight? I can't say he isn't, but I can't say he is, either.

Like it or not, the reality is that there's no way Morris-Clfiero is going to be inconspicuous in a crowd -- any more than a 7-foot-tall, red-headed guy I know. (Try watching people's reactions to him sometime.) Several of her carefully selected pictures show people who appear to notice her — but who wouldn't? Are they simply not supposed to look? Are they making fun of her? The photos themselves don't document that one way or another.

This is how the Bush administration bulldozed the United States into invading Iraq. They didn't have conclusive evidence regarding WMDs one way or the other; but they acted as if they did.  And, as is so often the case, the proponents of the invasion may have begun as liars but they wound up as fantasists, many of them believing their own propaganda.

As Errol Morris, in his New York Times Opinionator blog posts and in many interviews, what we think we see in photographs "can be so easily changed by the context that we place around them, the new story we place around them — the caption that we put under them can change everything." (See his book in his book "Believing is Seeing: Observations on the Mysteries of Photography.") Morris-Cifiero wants to have it both ways, though. On the one hand, she writes:

I do not know what the strangers are thinking when they look at me. But there is a Henri Cartier-Bresson moment when my action aligns with the composition, the shutter and their gaze that has a critical or questioning element. Even though they are in front of a camera, they feel they have anonymity because they are crossing behind me. […]

I only get angry when I hear someone comment about my weight and the image does not reflect the criticism. That’s frustrating: when I didn’t get the shot.

It's arguable whether she got the shot in any of the three photos that accompany her piece. On the other hand, in the same article, she says:

I suspect that if I confronted these narrow-minded people, my words would have no effect. So, rather than using the attackers’ actions to beat myself up, I just prove them wrong. The camera gave me my voice.

But what is that voice saying? 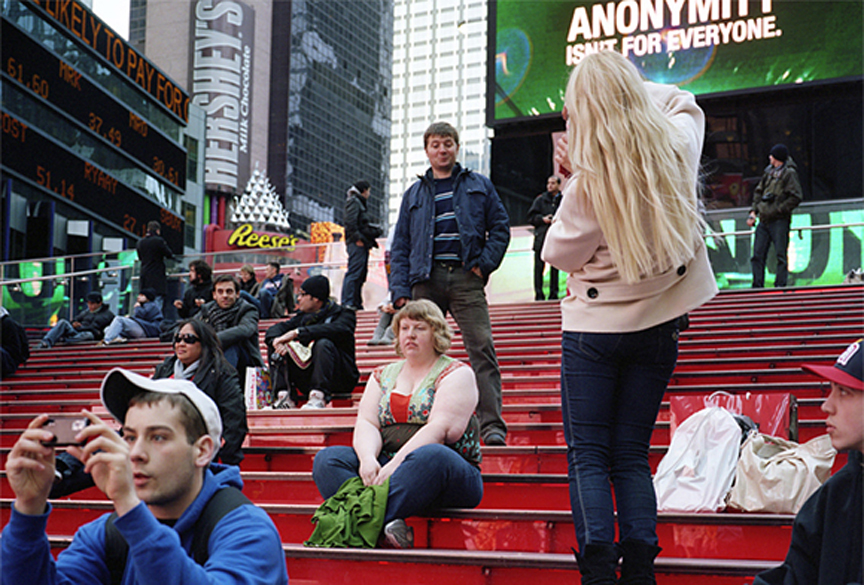 In another one of her photos she claims that a guy behind her is "smirking at me. He clearly does not approve." And maybe that's the case, but maybe it's not. I can't tell for certain. Can she? Can you? What does he see from back there? For all I know, he might just be blinking. Cameras often catch people with weird expressions nobody noticed but the lens. Is he smirking at Morris-Cifiero or smiling for the woman who's taking his picture? In the background is a billboard that reads: "Anonymity Isn't for Everyone." Maybe the image conveys more than she realizes …

ADDENDUM:  From the ScientificAmerican.com article mentioned above:

Instead, the research team, based at the University of Kent in England, found that many participants believed in contradictory conspiracy theories. For example, the conspiracy-belief that Osama Bin Laden is still alive was positively correlated with the conspiracy-belief that he was already dead before the military raid took place. This makes little sense, logically: Bin Laden cannot be both dead and alive at the same time. An important conclusion that the authors draw from their analysis is that people don't tend to believe in a conspiracy theory because of the specifics, but rather because of higher-order beliefs that support conspiracy-like thinking more generally. A popular example of such higher-order beliefs is a severe “distrust of authority.” The authors go on to suggest that conspiracism is therefore not just about belief in an individual theory, but rather an ideological lens through which we view the world.

* Before the invasion of Iraq, it was well-known -- by the press and the intelligence community -- that there was no reliable evidence that Saddam Hussein had nuclear weapons. Indeed, his repeated denials and reluctant cooperation with inspections were taken as evidence that he did have them. (As Donald Rumsfeld said: "Absence of evidence is not evidence of absence, or vice versa." He just forgot to add that it's not evidence of presence, either.)  But everybody seemed to be pretty sure that Iraq had them, nevertheless. (Rumsfeld again: "We know where they are. They're in the area around Tikrit and Baghdad and east, west, south, and north somewhat.") And they might have been right. All that was certain was that nobody knew for certain, because the evidence did not indicate what some claimed it did. (Another classic Rumsfeld quote -- and the smartest thing he ever said, in February, 2012: "Reports that say that something hasn't happened are always interesting to me, because as we know, there are known knowns; there are things we know we know. We also know there are known unknowns; that is to say we know there are some things we do not know. But there are also unknown unknowns -- the ones we don't know we don't know. And if one looks throughout the history of our country and other free countries, it is the latter category that tend to be the difficult ones." Yes indeed.) But if WMDs had been found, that still wouldn't change the immutable fact that the evidence cited by the Bush administration -- from the "aluminum tubes" to the "uranium from Africa" -- known to be false before the invasion, remained false afterwards. It's a simple concept. Yes, water is wet. But if you're going to attribute that fact to a government conspiracy involving unicorns, then let's see the evidence.… 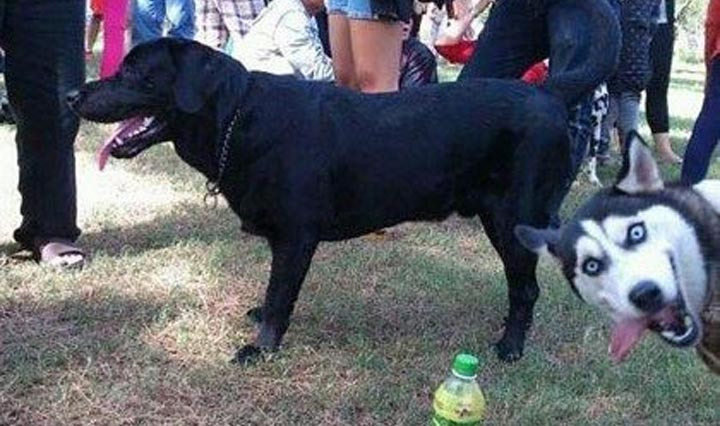