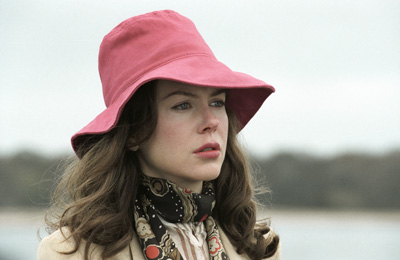 Look at this woman. Do you hate her character yet?

Noah Baumbach's "Margot at the Wedding" is one of the scariest films ever. Because it plays like a hidden-camera home movie as psychological x-ray. And no one is spared its cold, uncompromising scrutiny. (Or think of it as a segment of TV's "To Catch a Predator" -- and, as on the NBC flytrap reality show, everybody is the predator.)

If I were a character from the movie critiquing the movie, I would probably say something like: "Noah Baumbach must really detest his dreadful dysfunctional family." Baumbach's follow-up to "The Squid and the Whale" (among my top films of 2005) is another dead-on portrait of monstrously self-absorbed Northeastern inbreeders who believe that being "authentic" or "honest" means they have to express every single critical judgment or self-indulgent emotion that occurs to them, especially if they can use it to belittle or undermine somebody else in their immediate circle. Usually, that includes throwing in a clinical diagnosis, as a way of damning and dismissing the subject, and getting the amateur diagnostician off the moral hook just a little. (If you claim to be observing a "condition," then neither you nor the object of the diagnosis can be held fully responsible.)

I don't think I've ever felt such contempt toward characters in a movie before. Perhaps it's Strindbergian. The TIFF catalog compares the movie to Bergman and Woody Allen's Bergman exercise, "Interiors," and even Eric Rohmer. (Rohmer without pity. Or affection, I guess.) I thought it was more like "The Devil's Rejects," if the members of the Firefly family fed upon one another. And it's funny.

The people in this movie are types who either crib from their friends' and families' lives for their New Yorker short stories -- or who are mortified and infuriated that details from their lives are appearing in their friends' or families' New Yorker short stories. You may assume there's an "autobiographical" dimension to it not only because one of the movies subjects is the way writers autopsy and cannibalize the people in their lives for their fiction, but also because each and every knife-twisting line is so toxic and cutting, so astonishingly self-serving, that you figure somebody just had to have actually said it, or thought it, or attributed it to somebody else in a snarky piece of gossip disguised as a revealing psychological insight disguised as an expression of sincere concern. In other words, the way these people talk and behave seems too awful not to be true.

"Well," says one published author in the film, "we all take from life." The difference is that, by this point in the movie, I assume her work is probably terrible, simultaneously pitiless and self-pitying, relentlessly "honest" and utter bullshit. (See the character of Briony in "Atonement.") Baumbach himself, however, is an exceptionally keen writer and observer of the stifling Upper-East-class milieu in which he was raised. (Both his parents are writers and -- ouch -- film critics.) Which doesn't mean his movie has anything to do with them. But one littérateur in the film observes that the character of the father in another's story is loathsome but strangely sympathetic. You could say the same thing about nearly any character in "Margot at the Wedding." Just leave out the "sympathetic." In fact, just about anything you can say about this movie has already been addressed (and ridiculed) in this movie.

Here's the basic set-up: Margot (Nicole Kidman) and her androgynously doughy offspring, appropriately named Claude (or "Clawd" or "Clod," as in formless lump of dirt, played to excruciating perfection by Zane Pais) go to visit Margot's estranged sister Pauline (Jennifer Jason Leigh) in the old family house on the beach where they were raised. Pauline is about to get married to Malcolm (Jack Black), another shapeless wad of humanity who sports an ironic mustache that's "supposed to be funny." Next door are some vile neighbors living in a shack with the Kid From "Deliverance," who are probably killing and eating whatever creatures (including wild animals, domesticated dogs and human babies) they can hunt. They're like the family from "The Texas Chainsaw Massacre" (Tobe Hooper's), but they seem a little more human(e) than the main characters in the big house.

Everybody is so busy trying to avoid appearing hypocritical that there's not a genuine, straightforward emotional interaction in the film, just bubbles of self-absorbtion bumping into one another. These are extremely isolated, ultra-privileged people who would prefer to feel guilty about their privilege than grateful, because guilt intensifies their drama and their suffering and their sense of their own significance. Which, in the end, makes them feel a little better about themselves.

Oh, and there's the most cynically self-conscious use of a dog in the history of motion pictures. Baumbach knows exactly what he's doing, and it works.

If I'm making the film sound detestable, maybe that's the best way I know of to express my admiration for it, and the way it keeps relentlessly covering the same ground (the characters' linty psychic navels) while still managing to top itself, scene after scene. You'd think there's be almost no place to go after a mother -- quietly, with a vicious mixture of "concern" and disappointment -- tells her teenage son that he's "changed" and no longer has the grace she says she once treasured, and then adds as an afterthought, "But you're still handsome!" And yet, there is. The scene I just mentioned made me gasp and then laugh in astonishment. Unfortunately, through most of the movie, nobody around me was laughing much. To them, it maybe seemed more like Eugene O'Neill, I don't know.

Every performance in the film is terrifyingly good/awful. (That is, the actors hit every off-note just right, and the characters -- in case I haven't made this clear -- are mortifying.) I think there's some kind of excoriating analytical and observational genius in this home-horror-movie about cretinous, semi-articulate dunces. But when it was over (climaxing in an astonishing moment of self-dramatization and self-absorbtion), the same thought popped into my head that did at the end of Todd Solondz's outlandishly scornful "Palindromes": Who's going to want to expose themselves to this gory dissection of these coldblooded creeps? Makes you want to see a good George Romero zombie movie. At least the Living Dead have real, uncalculated emotions.

P.S. I just went back and re-read Roger Ebert's review of Rob Zombie's "The Devil's Rejects." For me, the comparison works perfectly:

Here is a gaudy vomitorium of a movie, violent, nauseating.... If you are a hardened horror movie fan capable of appreciating skill and wit in the service of the deliberately disgusting, [this film] may exercise a certain strange charm. If on the other hand you close your eyes if a scene gets icky, here is a movie to see with blinders on, because it starts at icky and descends relentlessly through depraved and nauseating to the embrace of road kill.