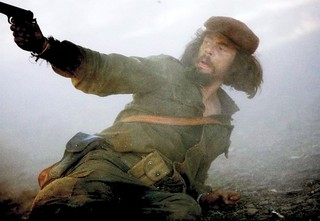 "The war is over. The revolution has just begun." -- Che Guevara (Benicio Del Toro), after Cuban guerillas have overthrown Batista's dictatorial regime on New Year's Day, 1959, in "Che."

Even without titles or credits, the running time of the gorgeous digital print of Steven Soderberg's "Che" that screened at the Toronto Film Festival was listed as 261minutes (that's four hours and 21 minutes for those of you without calculators). The working title for the epic was "Guerilla," then "Che," and despite Benicio Del Toro's fully-lived performance as Che Guevara, a more suitable title might be "Revolutions." Because this doesn't feel so much like a biopic as a documentary portrait of the recipes for political revolutions, successful and failed, in Cuba and Bolivia. The titles may rhyme, but nobody's going to mistake "Che" for "Ray."

I can't think of another American film quite like this in its scope, ambition, or detailed, nuanced portrayal of politics in action -- though parts triggered memories of Gillo Pontecorvo's "The Battle of Algiers" and a few films by Bernardo Bertolucci.

The first half, focusing on the Cuban revolution, skips around in time and location, from Argentina and Mexico to Che's 1964 address to the United Nations, in which he listed, among five Cuban demands for peace in the Caribbean, the "withdrawal from the Guantánamo naval base and return of the Cuban territory occupied by the United States." So far, no progress on that front. (Parallels to lessons learned and not learned in Vietnam and Iraq are apparent throughout the film, but not forced.)

The second half tracks Che to Bolivia, having resigned his post in Castro's Cuba to spread revolution in South America. Everything that worked in his favor in the earlier campaign goes awry in the second -- The Rise and Fall of the Socialist Empire Imperative.

And so, "Che" isn't so much a biography of Che as it is a chronicle of... process. If that sounds less than galvanizing, it shouldn't. This isn't a film built out of clichés and formula storytelling. Its structure is ingenious in retrospect -- the gathering momentum and coalescence of people, forces, incidents and ideologies in the first section, and the dissolution of them in the second. A lifetime of ideals, ambitions, theories -- not just Guevara's but many people's -- come down to a few quick gunshots in an anonymous landscape, a jarring illustration of the spot where the personal and the political intersect at bullet-point.

Despite its length, Soderberg's opus is consistently engrossing, not some kind of endurance test. In Toronto, "Che" was picked up for US distribution by IFC Films, with plans to release it in two parts (which may or may not be called "The Argentine" and "Gurerilla"). Upon seeing the entire opus in one sitting (with intermission), I thought once again of that memorable line of Pauline Kael's, from her review of Bertolucci's "1900": It makes most other movies "look like something you hold up on the end of a toothpick."

Films about torture are hard for me to deal with. At what point does witnessing the torture become a form of masochism? Or sadism? When does the visceral experience (a valuable reminder of the reality of torture) become exploitive, or just numbing? How much is enough, how much is too much -- and if it's torture, how can it not be "too much"? (I'm grappling with my own ambivalence as I write this, so please bear with me.) 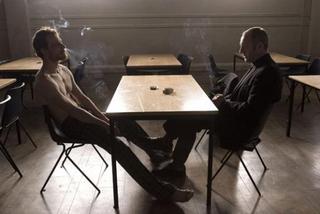 To say that "Hunger," the first feature by Turner Prize-winning British visual artist Steve McQueen, is "harrowing" is, I reckon, like saying a Holocaust movie is "powerful." How can a film that observes in agonizing detail the torture of prisoners, and their starvation during a hunger strike, be anything less than profoundly disturbing if it treats the subject seriously and with a conscience? Looked at another way: Where do "The Ghosts of Abu Ghraib," "Salo: 120 Days of Sodom," "24" and "The Passion of the Christ" overlap? When does tolerance become implicit sanction, or observation become implication?

I don't intend to be flip when I say that the Icon Films logo at the head of this picture made me skeptical about what I was seeing. The spectacle of skinny, long-haired, bearded white men -- naked or in loincloths -- being dragged and beaten to a bloody pulp (in part because of their religion) can't help but bring to mind other films about sacrificed rebels ("Braveheart," "Passion of the Christ") produced by Mel Gibson and company. And those films wallowed -- gloried -- in graphically gratuitous torture. I think "Hunger" is wiser than that (wiser in the blood, and in the artistry) but I admit there were times when I had my doubts. And those doubts, I'm beginning to think, were essential, and intentional, components of the experience of the film.

The story is real. The men are IRA, incarcerated in a hell-hole called the Maze Prison outside of Belfast in 1981. To the British government of Margaret Thatcher they are terrorists; to the Republicans they are political prisoners, and they are fighting for recognition as such. (Like the Castro government of the early 1960s -- see above -- the Irish Republican Prisoners also made five demands.) Whatever these men did in the outside world, what happens to them within the walls of the Maze, in the hands of the state, belies Thatcher's rhetoric: this is political violence (or, if you prefer, counter-violence), no matter how you parse it.

The captives refuse to wear prison garb (which they consider "enemy uniforms") or to bathe. They smear food, writhing with maggots, and feces on the walls and floors of their tiny bare cells, two men per filthy cube. Even under these unimaginably extreme circumstances, stripped of dignity and humanity, they maintain their political resolve -- and even, in unexpected ways, their Catholic mores: One man furtively masturbates under a blanket, afraid that his emaciated cellmate might catch him in the act. Each inmate is a prisoner of his own body, strong and vulnerable, a conduit for incoming and outgoing messages, a nexus for unimaginable pain. And yet his own flesh and mind are the only territories over which he has dominion. His only power is the will he can exert over his body.

"Hunger" is divided into three distinct acts: The first systematically observes the horrifying routine of abuse in the Maze. The second is a long (reportedly 20-minute) static two-shot of a conversation between IRA leader Bobby Sands (Michael Fassbender) and a priest, followed by, as I recall, three close-ups. This is the central negotiation, in which Sands lays out the plan for the hunger strike and the priest argues that this tactic, basically a series of premeditated suicides, is not the way to go. This is the fulcrum -- the moral and intellectual core -- of the movie. The third act bears witness to Sands' slow deterioration as he starves himself to death in protest. There's no way around it: The film is sickening. That's what it means to be. And perhaps that's what it needs to be. Because the truth is that no cause, noble or ignoble, was ever furthered without sacrifice. On the one hand there's Medgar Evers, and on the other there's Mohamed Atta.

McQueen's direction isn't particularly subtle, but it is effective, and even poetic. The scenes inside the cells at times take on an unbearable, horrifying beauty, as when a man sticks his arm through a hole in the window grating to feel snow falling on his skin, or to let a fly light on his finger. Later, a hauntingly composed memory-hallucination of a child running out of the sunlight and into a black forest achieves an archetypal resonance.

And speaking of resonance: the film's sound design is also dense and complex. "Hunger" begins with the deafening pounding of a prison protest -- followed by a high-pitched ringing so convincing it could be coming from your own ears. This cacophony is later echoed by the riot police rhythmically beating their clubs on their shields, and by the scraping of a push-broom on a cellblock floor, followed by the inescapable, deteriorating auditory perceptions of a body slowly shutting down. Dizzying tinnitus and muffled voices give way to the silence of the void -- a terrifying journey, a merciful release, an act of will and defiance. Death becomes, ingloriously, a means for regaining life: You will not possess this. It is mine.

"Hunger" won the Camera d'Or for a debut feature at the 2008 Cannes Film Festival. Actor Fassbender went on a medically supervised diet for the later scenes.