Thumbs up for Roger 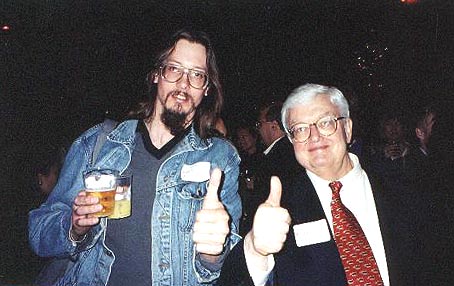 Thumbs up for a quick recovery.

Roger Ebert is in serious but stable condition after suffering a burst blood vessel near the site of an operation two weeks ago to remove cancerous growths from his salivary gland. These kinds of things are always scary, and I can't concentrate on much of anything but wishing for Roger's quick recovery. Thanks, too, to all of you who have sent e-mails with your best wishes. I'm saving them up to send to Roger and Chaz once he's out of the hospital.

Just to keep the positive recuperative vibes flowing, I'm posting this picture -- one of my favorites -- that I took at an Overlooked Film Festival reception at the Playboy Mansion in 2000. Here he is with Mark Borchardt of "American Movie" (who's holding a beer and a screwdriver -- which was pretty much the case for the entire evening). The great thing about this shot is that Roger did his thumb gesture just as I was about to take the picture, and Mark immediately put both his drinks in one hand so he could reciprocate. Just one of many great times I've had with Roger, and here's to many more!