The Uncertainty Principle (or, The Easy Read)

In Sally Potter's "Yes" (2005), there's a scene in a restaurant kitchen in which a Lebanese chef and a young Brit-punk dishwasher get into fierce confrontation (you can't really call it an "argument") over politics and religion. The kid grabs a frying pan and goes after the chef. The chef picks up a knife. Standoff. The manager arrives. Summarily, he fires the chef.

In the Q & A after the screening at Ebertfest, some people said they thought this was clearly a race-based (or racist) decision on the manager's part. Others debated the choice of weapons: Didn't a knife appear more threatening than a pan? 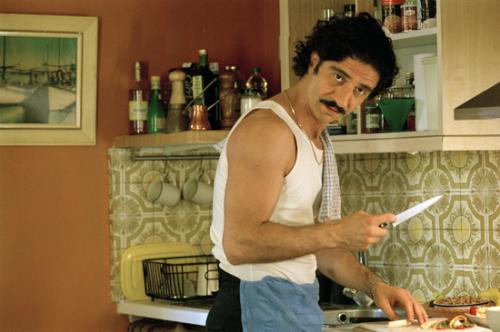 Back up two weeks to the Cinema Interruptus series of screenings at the Conference on World Affairs in Boulder, CO: We're looking at the scene in "No Country for Old Men" in which Sheriff Ed Tom Bell returns to the scene of the crime at the motel. [Spoiler alert -- although why you would be reading this blog if you haven't seen "NCFM" is beyond me.] The way the scene is constructed, we expect Chigurh to be standing behind the door when Ed Tom enters the room. The door opens flat against the wall. Ed Tom steps over a pool of dried blood in the doorway, looks around the room, checks the bathroom window (which is locked from the inside) and, relieved, sits down on the bed. He notices an air vent that has been removed. Four screws and a dime are on the floor.

What more do you need to know? I'm not saying it's unreasonable to want to know. But take a moment to look before you start jumping to conclusions. What is there and what is not there. Does the movie provide the answer(s) to your questions, or does it not? If not, what does that decision tell you? That the Coens are sloppy or forgetful? That they're interested in something else, like the experience Ed Tom has just gone through? That maybe you're asking the wrong questions? What else?

We ran the scene again, stopping to examine each shot in the scene. A few participants in the CWA crowd just couldn't deal. Was Chigurh actually hiding behind the door after all, just squeezing himself really, really tight against the wall? Did he climb through the air vent (that was less than a foot in diameter)? Was he hiding under the bed and Ed Tom just didn't think to look?

Even when it was in front of their eyes, they couldn't see what was there and what was not there. Cranky and exhausted, I finally lost it and said something like: "Look, you're either watching the movie or you're not. Everything you need to know is right there in the images on the screen and you either see it or you don't see it, but acknowledge the reality of what's in front of you."

What I mean is: The movie is this shot followed by this shot followed by this shot. It's not something you made up and stuck into it later to make yourself feel better. Sure, maybe Chigurh was kidnapped by aliens in the second before Ed Tom opened the door. Maybe he spontaneously combusted but didn't leave any smoke or remains behind because that's just the kind of "magic" guy he is. Maybe he was laying on the floor and Ed Tom just didn't notice him and stepped right over him. Maybe he got sucked into the television like Carol Ann in "Poltergeist"...

All week I'd used one of my favorite "Barton Fink" stories to illustrate how the Coens' minds (and films) work ("What don't I understand?"). I had been enormously grateful to them in 1991 when they chose not to open the box that Barton is carrying at the end of the movie. After all, we pretty much know what's inside. Do we need to see it, too? Does it even matter? The Coens said they'd considered it, but then asked themselves a more important question: If you see what's in the box, where does that get you?

Nowhere. So they didn't.¹ (They didn't have Marge spell out what she'd learned from her experience with Mike -- the key to solving the case in "Fargo"; they didn't have Tom explain why he was doing what he did every step of the way, or even in retrospect, in "Miller's Crossing." Indeed, at the end of the movie, when Leo says people always do things for a reason, Tom replies: "Do you always know why you do things, Leo?")

Flash forward again to Ebertfest 2008 and first-time filmmaker Jeff Nichols talking about his film, "Shotgun Stories." In the twilit first shot, we see scars or lesions or sores or something on the bare back of Son (Michael Shannon). In the movie, several characters tell stories they've heard about what may or may not have happened. Nichols said he wrote an expository scene that spelled it out in dialog.

"It was a terrible scene," Nichols said. He hated it. He cut it. Then he called his older brother and said, "I think I just took out the other shotgun story in 'Shotgun Stories.'" It was an intuitively smart decision. Had that scene been included, it would have violated the spirit and aesthetic of the rest of the movie. Some things are better left unexplained.

Which brings us back to "Yes." If only writer-director Potter had been there to talk about it (she had to cancel at the last minute because she was shooting a movie in New York). Yes, given the context of the scene, there's an implicit and explicit racial dimension to the scene. And maybe a man with a knife does look more dangerous than a man with a frying pan. But does it have to be one thing or the other? Is one more true, or less true, or can they co-exist along with other reasons or possibilities?

It makes you wonder who was actually watching the movie that was on the screen. In the post-movie discussion, several people mentioned how "layered" the film is -- like the duduk that courses through a Cuban salsa melody during a sequence intercutting images of one of the lovers in Havana and the other in Beirut. The film is written and performed entirely in blank verse. It's... poetic. And the easiest way to kill poetry, or cinema, is to nail it down to One Thing.

¹ My reading of the motel scene is here. (I'm sticking with my take, even though Glenn Kenny sees it differently.) No, I don't find it necessary to imbue Chigurh (or "No Country for Old Men") with supernatural powers to explain the scene, narratively or thematically. But it does come right after Ed Tom says he doesn't see him (he never sees him) as a "homicidal lunatic" but as a "ghost." It does work on that level, too. If you look at the way the shot of Ed Tom approaching the motel doors (two doors, not one) is framed, and you remember Chigurh's m.o. at the first motel where Llewelyn hides the satchel, you should have all the information you need. Also, see if you can catch a glimpse the lock housing on the room next door...