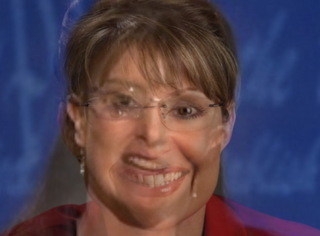 We've gotta cash in on this quick, so here's my pitch:

Animal Control nabs Palin off the street, mistaking her for a stray pit bull whose previous owner tested makeup on animals. Palin is asked to host "SNL" the week before the election, but nobody notices she's missing because the McCain campaign is so successful at keeping her away from the press that they forget where they put her. Security is airtight. Because Fey does a better Palin than Palin does, she is forced to do the show as Palin as Fey as Palin.

In a Halloween sketch, Fey plays Palin trick-or-treating in costume as Fey -- like Julie Andrews playing Victor playing Victoria in "Victor/Victoria" -- and then plays Palin as Fey dressing up as Palin. Andy Samberg puts on a moose suit and Palin (or Fey as Palin as Fey as Palin) shoots him by mistake. In other sketches, she appears as as Fey-as-Palin-as-Katie Couric, Fey-as-Palin-as-Nancy Pelosi, Fey-as-Palin-as-Elisabeth Hasselbeck and Fey-as-Palin-as-Tammy Faye Bakker. She shoots something in each sketch. The writing isn't that good, but everyone is surprised at how adorable Palin is on the show compared to her other television appearances. In her opening monologue (and in her surprise appearance as "herself" on Weekend Update), her crazy mixed-up grammar is transformed into a kind of abstract absurdist poetry. Unbeknownst to just about everyone, Fey provides the charisma component that Palin herself lacks. Fey-as-Palin is a huge success except as a vice-presidential candidate. 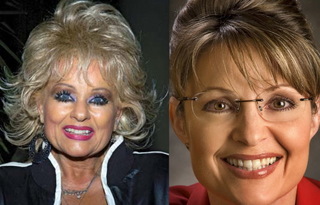 John McCain never notices that Palin is not Palin because he is old charmingly crusty in a grandfatherly way and has never actually met her. But the campaign freaks out when she fails to ignite crowds at rallies due to her not being there. After a nationwide search they find her on the set of "30 Rock," rehearsing a scene with Alec Baldwin, Will Arnett and Jack McBrayer. Fey-as-Palin claims the actors are her missing gay friends. The incident is suppressed. "30 Rock" goes on hiatus.

Meanwhile, the "real" Palin is rescued from the pound and offered shelter at Big Gay Al's Big Gay Animal Sanctuary. To calm her, Palin is told that she has been set free in Alaska, which has seceded from the United States and moved to Colorado, where it feels much safer. No longer does it have to share a narrow maritime border with Russia or a land one with Canada. Palin is greatly relieved not to have to be in watchdog mode all the time because of Putin and his rearing head. She can see there's snow on the ground, so she's satisfied with the explanation about Alaska squeezing itself down into Colorado, even though the snow is obviously made of cut-out paper and almost everybody is a crude cartoon. But she fits in. She's crowned the alpha female of her beloved Alaska Independence Party, which makes her as happy as a pig in you-know-what kind of facial make-up. She decides she likes it there, with the friendly faces shouting howdy neighbor and nobody is in crisis mode.

The Obama-Biden ticket wins the election. John McCain has a nuclear meltdown and disappears into the earth, leaving behind only a tiny, smoldering hole where his conscience used to be. After a few weeks, people's memories of Sarah Palin revert to what they were before late August, 2008. She becomes a dimly recalled punch line, like Fanne Foxe or Harriet Miers or ex-president George Q. Brock. Tina Fey returns to playing Liz Lemon on the successful NBC sitcom, "30 Rock." The End.

UPDATE (10/13/08): From "The Power of Political Pratfalls" by Edward Rothstein in The New York Times:

Oh, wait a minute. That wasn't Gov. Sarah Palin in the debate. That was Tina Fey doing her impression of Sarah Palin in the debate on "Saturday Night Live," an impersonation -- filled with perky winks and folksy gosh-darn-its and a self-conscious elimination of g's at the end of whatever word she happened to be sayin' -- that was so resonant, it almost displaced Ms. Palin's own performance as herself. [...]

In this case Ms. Palin seems prepared to offer a countercaricature. She said of Ms. Fey last month: "I love her. She's a hoot, and she's so talented." So perhaps Sarah Palin will meet "Sarah Palin" one day. Or she may caricature "Tina Fey" to do battle with Tina Fey. In a way the confrontation has already begun. Ms. Palin -- you can imagine the wink -- said of Ms. Fey: "It would be fun to meet her, imitate her and keep on giving her new material."