The Mystery of the Missing Mandy 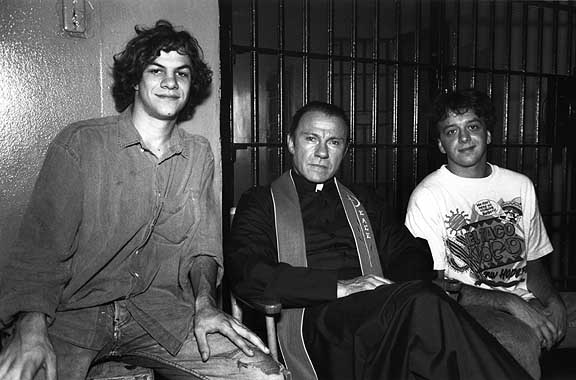 Harvey Keitel as a prison priest on the set of "It's Pat" with Gene and Dean Ween. Unfortunately, this framing device got cut!

In my review of "You, Me and Dupree," (which, to meet Sun-Times deadlines I had to write immediately after seeing the movie Monday night), I mentioned several indications that the movie had undergone some drastic cutting and revisions. I wrote:

Even more perplexing are the laborious set-ups for gags that are missing their payoffs -- the most notable being an entire character (Mandy, the love of Dupree's life for a few scenes) who never actually shows her face onscreen. We keep waiting for the punchline, but there isn't one. It seems she has simply been cut out of the movie (wait for the DVD, kids!). Perhaps, at one time, she was Annie, the fifth-or sixth-billed character supposedly played by Amanda Detmer, whom I do not recall ever showing up for work.

Since writing those words, I have Googled, I have investigated, and I can't find any reports on what happened. It's unusual to see somebody with such prominent billing and so little screen time (though, undoubtedly, other examples exist). Usually, somebody who has been cut out of the movie would also be removed from the credits -- though still get paid. (That's what happened when we had to cut Harvey Keitel's priest scenes out of "It's Pat," although he was great in 'em.)

I asked Anne Thompson and she said she had no idea what had happened. I asked David Poland and he said he'd spotted Amanda Detmer (a favorite of his) in the opening wedding scenes, but didn't know why she went away. It's clear from the way "Mandy's" scenes are shot, that her face is deliberately being shielded from view. But why? I'm throwing it out there to all you knowledgable cinephiles and voracious readers out there. Anybody know what the deal is?