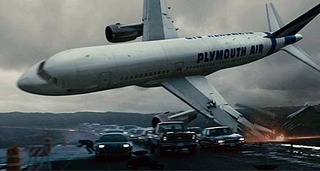 In the days before aggregators like RottenTomatoes and Metacritic created the appearance of instant-consensus by assigning numerical values to opinions, it was more fun to have an opinion of your own because it wasn't quantified and averaged with everybody else's.

The tendency now is to view critical opinion as a measurement -- and I'm not just talking about rating systems like stars or letter grades or thumbs. Those things may be mistaken for substantial observations, for the simple reason that the idea of a four-star rating is more tangible than, say, a sentence like, "This tension between realism and spectacle runs like a fissure through the film and invests it with tremendous unease," from Manohla Dargis's rich and revelatory New York Times review of "There Will Be Blood." But Dargis's sentence actually conveys a hell of a lot more about the movie than "Four Stars!" does. (Times critics don't do star ratings, which means that somebody at RottenTomatoes and Metacritic has to actually read the reviews and make them up. The results can be incongruously amusing. Sometimes they don't read very closely.)

When what somebody has to say about a movie is subordinated to a numerical scale -- and then all the grades themselves are plotted on a curve.... well, who cares about the textures of the experience: What percentage did it get on the TomatoMeter?!?!

I bring this up because of an experience Roger Ebert describes having last week:

Either I'm wrong or most of the movie critics in America are mistaken. I persist in the conviction that Alex Proyas's "Knowing" is a splendid thriller and surprisingly thought-provoking. I saw the movie at an 8 p.m. screening on Monday, March 16, returned home and wrote my review on deadline. No other reviews existed at that time. Later in the week, I was blind-sided by the negative reaction. And I mean really negative.

I haven't seen "Knowing" yet, but I'd argue that both assertions in that first sentence can be true (or false). Still, I can relate. It's one thing to be the voice in the crowd pointing out that the Emperor has no clothes. It's very different to feel like you're the only one who's cheering an Emp you feel is magnificently attired. (See my article, on underappreciated horror movies, "The Critics Were Horrified...." I maintain that Neil Jordan's "In Dreams" -- RT score of 23 percent -- is a near-masterpiece. And all the "(highest rating)s" in the world are not going to cause me to unsee the evidence before my own eyes and make me proclaim that I believe "Slumdog Millionaire" -- RT score of 94 percent -- is anything more than an average exploitation picture.)

But critical opinion isn't an electoral contest where winners and losers are determined by some (largely illusory) consensus. Not many years ago, the general public would not have had any idea of what many critics outside their own town had said about a film -- nor would they have known how each and every movie performed at the box office weekend after weekend.

Roger Ebert was a big champion of director Alex Poyas's "The Crow" and "Dark City" ("I, Robot" not so much), so I wasn't at all surprised he was taken with "Knowing." If anyone was likely to appreciate this film it would be Ebert, who wrote back in 1998:

"Dark City'' by Alex Proyas is a great visionary achievement, a film so original and exciting, it stirred my imagination like "Metropolis" (1927) and "2001: A Space Odyssey" (1968). If it is true, as the German director Werner Herzog believes, that we live in an age starved of new images, then "Dark City'' is a film to nourish us. Not a story so much as an experience, it is a triumph of art direction, set design, cinematography, special effects -- and imagination.

So, the way I look at it, you're either going to be interested in what Roger Ebert or some other critic has to say about this movie (or any movie) or not. But is some TomatoMeter rating going to offer a better quality of information? Are you going to get more out of a movie for having checked its Metacritic score first?

If, as the conventional wisdom has it, film critics have become irrelevant, it's the attitude that reduces their observations to fractions and clip art that has made them so. A statistical chart based on suspect data (numbers derived from unknown or unreliable sources -- JustSomeGuy at potatopan.com, anybody?) can provide you with only so much information, much of it perfectly useful: cast, crew, MPAA rating, running time -- maybe even subjective attempts at describing a genre or premise. But it cannot provide a critical voice which involves interpretive intelligence, perspective, taste, wit, emotion... That's something only a real movie critic can offer.

To me, the polarization of critical opinions may say more about a movie than its average score. "Watchmen," for example, gets a tepid 56 on Metacritic -- but the median tells a different story, with ratings clustered in the 100s [5], the 50s [7] and the 20s [3]. You'll have to read them to find out why, but the range suggests a lack of consensus, which I think is usually a healthy sign. Meanwhile, if you're looking for tallies, you may as well read the box office charts. They'll tell you as much about a movie as any other kind of numerical score.