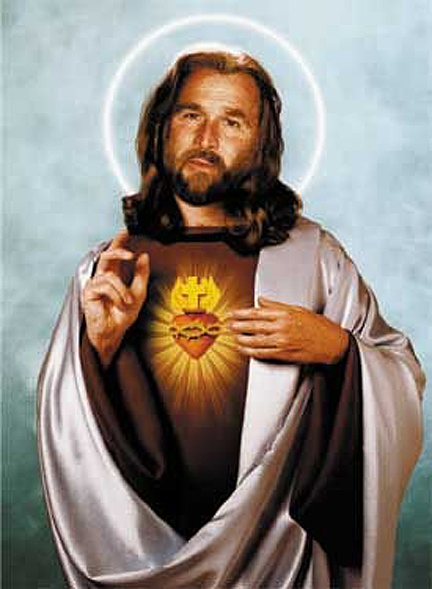 Forget Christopher Hitchens on Iraq. The author of the "controversial" "God Is Not Great: How Religion Poisons Everything" (9 weeks on the New York Times best-seller list, now at number 2 -- but only among people who buy and read books) has misplaced his delusional faith in the Rumsfeld / Cheney / Bush version of Mess 'o Potamia for too long. When he writes or speaks about the invasion and occupation of Iraq, he is as unintelligible as someone speaking in tongues. Which, essentially, he is.

But when it comes to god, Hitchens is not similarly faith-based. To decide not to profess faith in a personal god in America these days -- when even militant Islamists acknowledge Muslims, Christians and Jews as "people of the book," fellow believers in Abrahamic religion -- is one of the few remaining Politically Correct taboos. Theistic concepts of god are everywhere: on our money, in our Pledge of Allegience, in White House pronouncements from our Televangelist-in-Chief... There are no self-identified atheists ("non-theists") in Congress [correction: one, as of 2007: Rep. Pete Stark], and some state laws prohibit nonbelievers from running for public office -- the "no religious test" provision of the constitution notwithstanding.

So, it's rather surprising for a change to find a small breath of fresh air emanating from Hitchens, who is better known for his stale, flammable whiskey-drenched halitosis. Some of his anti-religious arguments are as irrational as his Rumsfeldian ones (and the religious beliefs he savages), but at least his atheistic provocations lack the overwhelming sense of self-justification that overburdens his ex post facto rationalizations about Iraq.

Here is my challenge. Let Gerson name one ethical statement made, or one ethical action performed, by a believer that could not have been uttered or done by a nonbeliever. And here is my second challenge. Can any reader of this column think of a wicked statement made, or an evil action performed, precisely because of religious faith? The second question is easy to answer, is it not? The first -- I have been asking it for some time -- awaits a convincing reply. By what right, then, do the faithful assume this irritating mantle of righteousness? They have as much to apologize for as to explain.

Essentially conceding that philosophy and secularism do not condemn their adherents to lives of unbridled selfishness, and that (say) the Jewish people did not get all the way to Mount Sinai under the impression that murder and theft and perjury were okay, and also that we could not have evolved unless human solidarity was in some way innate, Gerson ends weakly by posing what is a rather moving problem.

"In a world without God," he writes, "this desire for love and purpose is a cruel joke of nature -- imprinted by evolution but designed for disappointment." Again, he substitutes the wish for the thought. We very probably are, as he admits, not the designed objects of the Big Bang or of the process of natural selection. But this sober conclusion, objective as it is, is surely preferable to the delusion that we have been created diseased, by a capricious despot, and then abruptly commanded to be whole and well, on pain of terror and torture. That sick joke is one that we can cease to find impressive, that belongs in the infancy of our species, and gives a false picture of reality that we would do well to outgrow.

Advertisement
Which got me thinking: I can think of many, many religious movies (from silents like "Ben-Hur," through the biblical epics of the 1950s, the Christian parables of Ingmar Bergman, up to "The Passion of the Christ" and "Dogma"). But can you think of some movies that are explicitly atheistic, that argue against belief not just in religious dogma but in theism itself? Even "Monty Python's Life of Brian," though a satire of religious history and religious thinking, specifically confirms (in a tongue-in-cheek way) the New Testament version of the birth of Jesus in the opening scene, when the three wise men withdraw their gift-balms from Brian's manger and re-gift them to a child in glowing swaddling clothes nearby....

If you were programming an Atheist Film Festival, what titles would you include? I'm drawing a blank at this moment.

P.S. Back to that first paragraph: If you want to see a shining example of Hitchens' intellectual dishonesty and Rumsfeldian rhetoric, check out the hilariously evasive questions he lobs to himself (who else?) in the preposterous "So, Mr. Hitchens, Weren't You Wrong About Iraq?" (Can you guess his answer?) If you throw yourself the right softballs, you can easily knock 'em outta the park! My favorite: "Should it not have been known by Western intelligence that Iraq had no stockpiles of weapons of mass destruction?" Oddly, Hitchens doesn't even answer it. Of course, the significant question would be more like: "Was it not known by Western Intelligence and the news media that the Bush administration was exaggerating the extent of its knowledge about Iraq's stockpiles of WMD?" Simple answer: Yes. It was known. And it was even reported (by a few stalwart souls, like Knight-Ridder). But it didn't make the evening news or the front pages, so few paid attention...