"That's funny...That plane's dustin' crops where there ain't no crops." 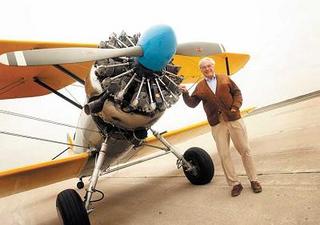 Alfred Hitchcock's "North By Northwest" is just about my favorite movie. No film has ever been more entertaining. (See Glenn Kenny's personal paen to the picture, "Obviously, they've mistaken me for a much shorter man.") And a piece of it is still alive and well in Lake Forest, IL. From The Lake Forester:

"I bought it about five years ago," Knauz, 81, said of the fully restored Navy N3N that he keeps in his hangar at the Kenosha Regional Airport.

The appeal of owning the plane used in the film -- named by the American Film Institute as the 7th greatest American mystery movie in history -- intrigued Knauz.

"It sat in a hangar in Bakersfield, California until I found it," Knauz said during an interview at his hangar, "Stick and Rudder," in Kenosha.

"The guy I bought it from actually restored it in Hawaii," Knauz said, explaining that the surplus Naval planes built before World War II were later converted to crop-dusters.