Terrence Malick, the man who wasn't there

If you followed the gossip from the recent Cannes Film Circus, you will have heard that there were two incidents of scandalous behavior by directors who had films in competition. One of them involved Lars von Trier, who felt so alienated during the press carnival for his film "Melancholia" that he tried to inject some provocative humor into the proceedings and wound up making Nazi jokes that didn't go over at all well. As he later told Dennis Lim in the New York Times: "I got carried away. I feel this obligation, which is completely stupid and very unprofessional, to kind of entertain the crowd a little bit."

Von Trier's actions got him declared "persona non grata" by the authoritarian Board of Directors, while the other filmmaker, Terrence Malick, got the Palme d'Or by behaving even more shockingly (if some of the press reports were to be believed): He didn't walk the red carpet or attend press conflagrations for his movie, "The Tree of Life"! Strange as it may seem, some people -- even movie directors -- don't crave the attention. Brad Pitt, the extremely famous movie star who did a fine job fielding mostly inane and redundant questions from the keyboard paparazzi after the press screening, noted, as did others, that Malick prefers not to be hailed as a demigod in a festival atmosphere. Imagine that.

Oddly, Malick is often described as "reclusive," and yet some pundits found it puzzling that he behaved accordingly, generally avoiding the publicity spotlight and refusing to throw himself into the glitz maelstrom. The guy made his first feature in 1973 and then took 20 years between his second ("Days of Heaven," 1978) and his third ("The Thin Red Line," 1998). Maybe his ego is not stoked by visions of red carpets, flash photography and gaggles of reporters.

After the awards were announced Sunday, Andrew O'Hehir in Salon.com put things in perspective:

Fox Searchlight will release Malick's film in American theaters this week, and couldn't have asked for a bigger or better publicity push. "Tree of Life" will presumably now be discussed as a factor in the Academy Awards race, but no film has won both the Palme d'Or and the best-picture Oscar since Delbert Mann's "Marty" in 1955.

Malick has apparently left Cannes, but even when he was in town he declined to address the press or appear on the red carpet. Journalists here have grumbled all week about the precedent this sets, since filmmakers attending the festival are customarily expected to put in a certain amount of face time with both the press and the public. There's a sense in which this long, long awaited project -- originally scheduled to premiere here last year -- is a special case on many levels. At any rate, I don't think Malick or his production partners are terribly concerned about that tonight.

"Tree of Life" producers Bill Pohlad and Dede Gardner accepted the Palme d'Or in Malick's stead, and Pohlad addressed the subject of the director's absence at the ensuing press conference. "I'm not saying it's an easy question to answer," he said. "But Terry personally is a very humble guy and a very sincere guy. He wants the work to speak for himself and stay in his private life, and not have it be about the ego of it or the celebrity of it." Gardner added that Malick's only words to the press were to express his gratitude to his wife and his parents.

Take a moment to let the shock sink in. Why was Malick not declared "a persona non grata at the Festival de Cannes, with effect immediately"? Because he quietly declared Cannes a "scene non grata"? No matter what Lars von Trier said or meant, at least he played the game. No so-called "journalists" fretted that he was setting... a precedent! Are these disgruntled celebrity reporters suggesting that Cannes is (or should be) like the Golden Globes, where you don't win if you don't show up? 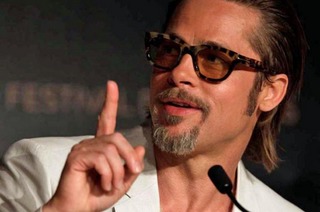 I've attended my share of movie press carnivals and interviewed hundreds of filmmakers (some of them celebrities) one-on-one and, believe me, the last person anybody wants promoting a movie is somebody who doesn't want to be doing it. Or doesn't know how. Or doesn't care to know how. And not all directors are terribly good (or comfortable) at talking about their work, anyway. O'Hehir is right: The movie got as much publicity from Cannes as its producers and distributors could possibly have wanted. (Anybody remember last year's Palme d'Or winner? Of course you do! It was Apichatpong Weerasethakul's "Uncle Boonme Who Can Recall His Past Lives," my favorite stateside theatrical release of this year so far, and look at what a publicity windfall it reaped from the award. Year before that, it was Michael Haneke's "The White Ribbon," and the year before that, Laurent Cantet's "The Class.")

"The Tree of Life" will open here in Seattle in June sometime. Fox Searchlight did something very smart last week and press-screened the movie in many U.S. cities at the same time it was playing in Cannes. I forgot to go (my mind was elsewhere), but I look forward to seeing it, and now maybe they'll move up the date. One thing I will not do is watch the trailer. Why would anyone voluntarily seek out the trailer for a movie they are really look forward to seeing -- especially if it's a rarity like a Terrence Malick picture? I'm bewildered when I see people forwarding links to online video clips, as if they can't wait to rob the experience of its freshness.

Why would you want pieces of the movie implanted in your head before you see the whole picture for the first time? It's one thing when a trailer uses unique or supplemental footage shot especially for the purposes of creating a short movie that can sell the feature (Hitchcock's famous walk-through of the Bates Motel and residence for "Psycho"; the "Creep" choir montage for "The Social Network"...), but why would you want to take the risk of sampling a host of images you'll inevitably be expecting to crop up when you see the movie? (Hmmmm, when's she going to get naked in the woods? How are they going to get to the top of that building? How are they going to work in those CGI creatures?) I wish we could find more opportunities to let movies speak for themselves... until after we've actually seen them.