Painter and critic Manny Farber, whose book "Negative Space" is one of the essential collections of visual-arts criticism, has died at the age of 91. Farber's writing was scrappy, unpretentious and iconoclastic, not unlike the films and filmmakers he favored, from the genre pictures of Sam Fuller, Don Siegel, Sam Peckinpah and John Wayne, to the visionary and experimental work of Werner Herzog, R.W. Fassbinder, Andy Warhol and Chantal Akerman. (See pages from the expanded 1998 edition here.) 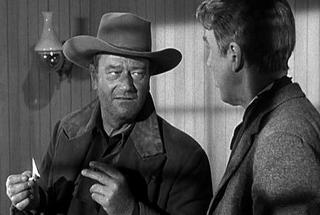 Unquestionably his most famous and reverently-quoted essay was 1962's "White Elephant Art vs. Termite Art." Modern art, he wrote, had become "a yawning production of overripe technique shrieking with preciosity, fame, ambition: far inside are tiny pillows holding up the artist's signature, now turned into mannerisms by the padding, lechery, faking required to combine today's esthetics with the components of traditional Great Art."

Farber is as much fun to read as he is to agree -- and argue-- with. I can think of no better tribute than to cite a few excerpts from his "termite art" treatise:

A peculiar fact about termite-tapeworm-fungus-moss art is that it goes always forward eating its own boundaries, and, likely as not, leaves nothing it its path other than the signs of eager, industrious, unkempt activity.

The most inclusive description of the art is that, termite like, it feels its way through walls of particularization, with no sign that the artist has any object in mind other than eating away at the immediate boundaries of his art, and turning these boundaries into the conditions of the next achievement. Laurel and Hardy, in fact, in some of their most dyspeptic and funniest movies, like "Hog Wild," contributed some fine parody of men who had read every "How to Succeed" book available; but, when it came to applying their knowledge, reverted instinctively to termite behavior.

One of the good termite performances (John Wayne's bemused cowboy in an unreal stage town inhabited by pallid repetitious actors whose chief trait is a powdered make-up) occurs in John Ford's "The Man Who Shot Liberty Valance."... Wayne's acting is infected by a kind of hoboish spirit, sitting back on its haunches doing a bitter-amused counterpoint to the pale, neutral film life around him. In an Arizona town that is too placid, where the cactus was planted last night and nostalgically cast actors do a generalized drunkenness, cowardice, voraciousness, Wayne is the termite actor focusing only on a tiny present area, nibbling at it with engaging professionalism and a hipster sense of how to sit in a chair leaned against the wall, eye a flogging overactor (Lee Marvin). As he moves along at the pace of a tapeworm, Wayne leaves a path that is only bits of shrewd intramural acting -- a craggy face filled with bitterness, jealousy, a big body that idles luxuriantly, having long grown tired with roughhouse games played by old wrangler types like John Ford. [...]

"Citizen Kane," in 1941, antedated by several years a crucial change in films from the old flowing naturalistic story, bringing in an iceberg of hidden meanings. Now the revolution wrought by the exciting but hammy Orson Welles film, reaching its zenith in the 1950's, has run its course and been superceded by a new film technique that turns up like an ugly shrub even in the midst of films that are preponderantly old gems. Oddly enough the film that starts the breaking away is a middle-1950's film that seems on the surface to be as traditional as "Greed." Kurosawa's "Ikiru" is a giveaway landmark, suggesting a new self-centering approach. It sums up much of what a termite art aims at: buglike immersion in a small area without point or aim, and, over all, concentration on nailing down one moment without glamorizing it, but forgetting this accomplishment as soon as it has passed; the feeling that all is expendable, that it can be chopped up and flung down in a different arrangement without ruin.

Farber framed his essay as a "this vs. that" equation in order to prod and provoke. Art doesn't really fall so neatly into one category or the other. (In that respect you could say his argument is of the White Elephant variety.) But he challenges the prevailing rules and rouses you from the habits of tradition, doesn't he?

Be sure to check out David Hudson's round-up of Farber appreciations at GreenCine -- and don't miss those by Girish (from 2006), Jonathan Rosenbaum (from 1993), and Noel King's introduction to a Farber-centric issue of Framework in 1999.