Temple of Doom: Bang a gong, sing a song

The beginning of the dissolve (recall, with nostalgia, when Paramount was A Gulf + Western Company?).

This is a contribution to Ali Arikan's Indiana Jones Blog-a-Thon at Cerebral Mastication.

"Indiana Jones and the Temple of Doom" tells you how to watch it in the first shot. Well, actually before the first shot, since the Paramount logo dissolves (as it did in "Raiders of the Lost Ark") from one mountain into another, so that it pokes into the movie for a few seconds. This time the twin peak is revealed to be embossed on a gong -- which establishes the retro-1930s "Oriental"-exoticism theme of the adventure, and kicks off Kate Capshaw's Cantonese "Anything Goes" musical number with a bang, beginning with the extended take that immediately follows.

For movie fans of all ages, this gong instantly evokes fond, resonant memories: 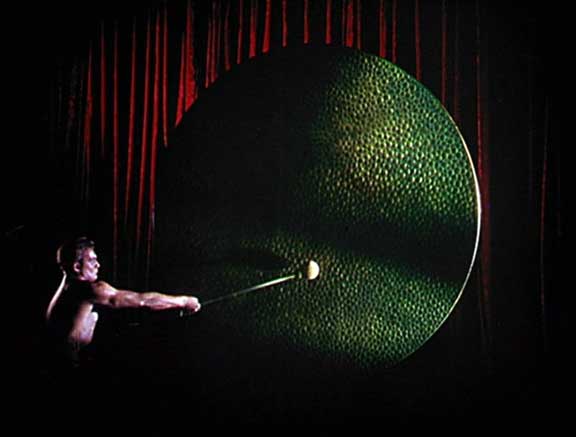 From the head of "Black Narcissus"... 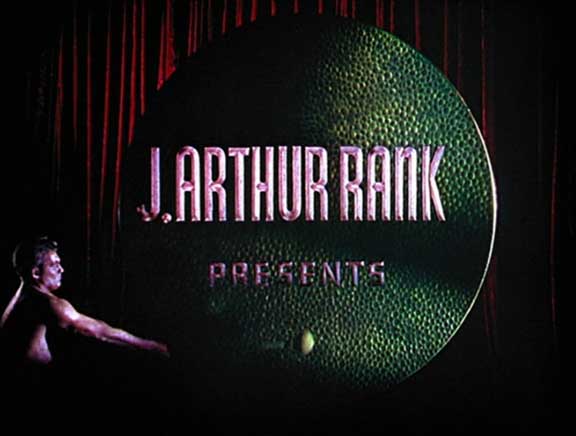 ... just before the Archers logo.

... of the famous logo for J. Arthur Rank, the British mogul who, as it happens, bought the famous Pinewood Studios in 1935, the same year in which "Temple of Doom" is set. The Rank organization (which included distribution and exhibition operations, as well as production facilities) put its gong on many of the most memorable British pictures of the era, including classics by Michael Powell and Emeric Pressburger ("Black Narcissus," "The Life and Death of Colonel Blimp," "A Matter of Life and Death," "The Red Shoes") and David Lean ("Great Expectations," "Oliver Twist"), and some of the Ealing Studio comedies ("Kind Hearts and Coronets," "The Ladykillers"). 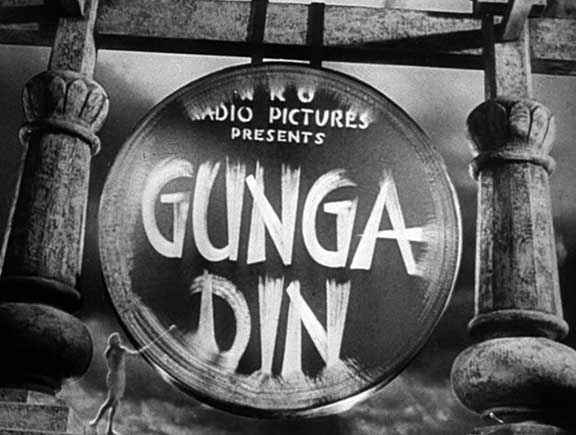 ... and of "Gunga Din," the spectacular action hit of 1939, with Cary Grant, Victor McLaglen, Douglas Fairbanks Jr. and Sam Jaffe, based the Rudyard Kipling poem, set in faraway India. (This also puts the film's attitude toward the mysterious "darker races" in proper Hollywood period-fantasy perspective.)

So, when Capshaw launches into Cole Porter's tongue-in-cheek nostalgia number ("In olden days a glimpse of stocking / Was looked on as something shocking / Now, heaven knows / Anything goes!"), Steven Spielberg's leading lady, and his film, are winking directly at the 1984 audience and inviting them to climb aboard a thrill ride through the movies, from Busby Berkeley musicals to boys' adventures like "The Four Feathers" and "Gunga Din." Yes, it's dark. Did you ever go on "Mr. Toad's Wild Ride" (the craziest, most hallucinogenic attraction ever at Disneyland), where you are sent on a spin through hell? That's dark. But the illusions only work in the dark.

My childhood friends and I spent many a Saturday afternoon watching (on basement TVs), and then re-enacting (on and around tree stumps and backyard picnic tables), perilous stunts involving savage blood-rituals, narrow escapes and (most of all) flaming pits of red-hot lava. What we accepted as family fun in the 1960s and 1970s became the basis for the PG-13 rating in the 1980s. Go figure.

For me, this most cinematically intoxicated/intoxicating of the Indiana Jones pictures (the flawlessly put-together mining car roller-coaster ride adapts gags -- involving a railroad switch, a large piece of lumber, a water tank -- from Buster Keaton!) towers above the others in the series. Like the "Star Wars" trilogy (there's only one trilogy), the "Indiana Jones" films reached their pinnacle in the second installment.