In the years after World War II, there emerged from the Ealing Studios of England a series of comedies so dry and droll, so literate and cynical, that the phrase "Ealing comedy" described them and no others. Many starred Alec Guinness, then in his 30s, so anonymous in appearance that he was told by an early teacher, "you will never make an actor." It was like that until the end of his days; once, while dressed as Hitler for a costume fitting, he stepped outside and failed to raise the eyebrow of a passing policeman. While the other great actors of his generation--Olivier, Gielgud, Richardson--attracted crowds wherever they went, Guinness could, he reported, go to the cinema without ever being asked for his autograph.

If he was unremarkable in person, he played a series of remarkable characters in the movies, each one a newly-minted original. He was shy, stammering Herbert Pocket in "Great Expectations" (1946) and two years later the diabolical Fagin in "Oliver Twist." He blew up "The Bridge On the River Kwai" (1957), was an eccentric painter in "The Horse's Mouth" (1958), a genial colonel in "Tunes of Glory" (1960) and the same year a vacuum-cleaner salesman as "Our Man in Havana." He was a desert prince in "Lawrence of Arabia" (1962), a Soviet official in "Dr. Zhivago" (1965), an imperturbable Indian doctor in "A Passage to India" (1984) and Cromwell, Disraeli, Father Brown, Scrooge and of course Hitler. Little wonder his autobiography is titledBlessings in Disguise. It is an injustice that he is best remembered as Obi-Wan Kenobi in the "Star Wars" movies, which he told me were boring to make because he spent most of his time standing alone in front of a back-projection screen, reciting dialogue.

Consider how unnecessary such special effects were in "Kind Hearts and Coronets" (1949), in which Guinness plays eight different members of the same family, of both genders and a six-decade age span, by doing relatively subtle things with makeup, posture and behavior. Because he was nobody he could be anybody, and here he creates characters who are pompous, silly, inconsequential, or even actually nice to Louis. ("I was glad," says the hero of the film about his employer Ascoyne D'Ascoyne, "after all his kindness to me, that I should not have to kill him.")

The film began a classic run of Ealing comedies, which continued with "The Lavender Hill Mob" and "The Man in the White Suit" (both 1951) and "The Ladykillers" (1955), in which a sweet little old lady buys the story that her new roomers, all crooks, are actually musicians. Their rehearsal sessions are priceless. All of these Ealings were being revived with new prints when I was in London in August 2002. The big screen underlined the quality of the black and white cinematography, which in the case of "Kind Hearts" seems to owe something to "Citizen Kane"--another film that begins at the end and then circles back with narration.

The opening scene of "Kind Hearts and Coronets" shows Dennis Price as Louis Mazzini, a newly-minted Duke who has methodically tried to murder his way to the title. In the last night before he is to be hanged, Louis writes his memoirs, and as he reads them aloud we journey back through his life. His mother, we learn, was a daughter of the aristocratic D'Ascoyne family, who ran away with an Italian tenor and was disowned. After the tenor died on the day of the boy's birth, his mother's appeals to her family were coldly rejected, and mother and son were reduced to a life of genteel poverty. But Louis' mother always held out the hope that he might someday inherit the title (which in the D'Ascoyne family descended through women as well as men). After his mother dies she is cruelly barred from the D'Ascoyne family crypt, Louis buries her in "a hideous suburban grave" and vows revenge.

He pastes the family tree onto the back of his mother's painting of the family home, where she spent her happy early days, and one by one he crosses off D'Ascoynes as they die. A "fortunate epidemic of diphtheria" carries off one, but Louis will have to personally murder some of the others, and as he takes a sixpenny tour of the family seat he wonders how he will get close enough, observing sadly, "It is so difficult to make a neat job of killing people with whom one is not on friendly terms."

Price is impeccable as the murderer: Elegant, well-spoken, a student of demeanor. That is what gets him a job in the family bank, where an uncle takes pity on him. The uncle and all of the other D'Ascoynes are played by Guinness (the list includes the Duke, the Banker, the Parson, the General, Admiral, Young Ascoyne D'Ascoyne, Young Henry, and Lady Agatha D'Ascoyne). What is intriguing is that all of these characters, while obviously members of the same family, are not obviously Guinness, unless we insist on thinking of them in that way. One tactic that helps his impersonations is the tendency of the director, Robert Hamer, to shoot mostly in long and medium shot, generally avoiding closeups that can be too carefully scrutinized.

Guinness plays D'Ascoynes who are tall, short or stooped, young or old, male or female, finding the characters largely in his body language and a few wigs or beards. It is helpful, probably, that the focus of most of the scenes is on young Louis; it is significant, somehow, that the actor playing eight characters is not given top billing and the movie is not about him.

The methods of Louis' murders are in the spirit of George Orwell's famous essay "Decline of the English Murder" (1946), in which he regretted the modern practice of simply shooting people and being done with it. Praising the ingenuity of an earlier generation of English murders, Orwell examines those crimes "which have given the greatest pleasure to the British public," finding that poison is the preferable means, and that an ideal murderer is a member of the middle class who hopes to improve his social position or get hold of a legacy.

"Kind Hearts and Coronets," set circa 1900, admirably meets his criteria. One D'Ascoyne is dispatched by poison, another is blown up at tea, and a third is swept over a waterfall after Louis unties his boat. (The victim was spending an illicit weekend with his mistress at the time, and Louis observes: "I was sorry about the girl, but found some relief in the reflection that she had presumably during the weekend already undergone a fate worse than death.") My favorite murder involves a suffragette D'Ascoyne who is demonstrating in a hot air balloon when Louis shoots her down, observing "I shot an arrow into the air/She fell to earth in Berkely Square."

In the course of his rise to the Dukedom, Louis conducts parallel affairs, one with a woman he loves, the other with a woman he needs. Sibella (Joan Greenwood) is the daughter of the family where he boarded after his mother's death; she loves him, but believes he has no prospects, marries a boring man, and then begins to call on Louis. Greenwood's performance is luscious, with her little lisp and air of languorous petulance. The other woman, Edith (Valerie Hobson), is the widow of one of his victims, and well-placed with money and position in society. When the amoral Louis is not with the one he loves, he loves the one he's with.

Despite its murders and intrigues, its betrayals and blood feuds, "Kind Hearts and Coronets" has a dry and detached air, established by the memoirs of Louis, who maintains a studied distance from the evils he has committed. Wounded by the slights to his mother, he essentially believes the D'Ascoynes are asking for it. The movie is unusually dependent on voice-over narration, objective and understated, which is all the funnier by being so removed from the sensational events taking place. Murder, Louis demonstrates, and Orwell would agree, can be most agreeably entertaining, so long as the story lingers on the eccentricities of the villain rather than on the unpleasant details of the crimes.

Note: The title comes from Tennyson, whose advice Louis should have taken: "Kind hearts are more than coronets, And simple faith than Norman blood." 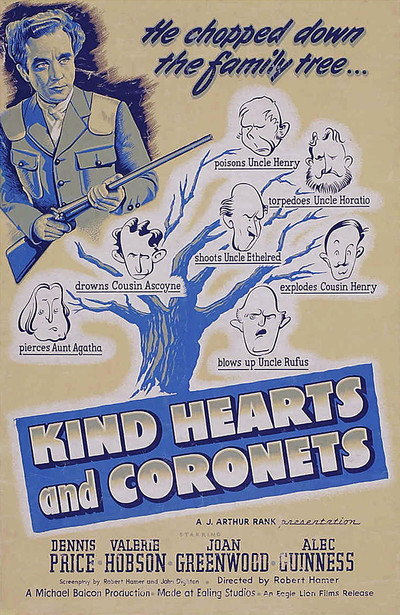