Before I get to the movie part of this post, I want to toast Paul Krugman. He is one of the few public figures I've ever considered a personal hero. (Jon Stewart and Stephen Colbert are, too, and I'm not joking.)

In the bleakest hours of the new millennium -- through 9/11, Iraq, soul-shattering scandals, national elections, and impending financial disasters -- Krugman stood as a beacon of hope and, if you'll pardon the expression, moral clarity in what Nick Lowe (and Elvis Costello) memorably called "the darkness of insanity." 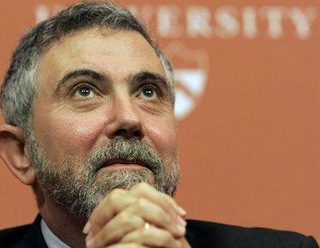 Hired in 1999 as the New York Times economic columnist, Krugman wound up doing what so many journalists, even at his own paper, were failing to do. He reported. Not just what people said, but how what they said compared to independently verifiable reality. Week after week, column after column, Krugman was virtually alone (alongside Knight-Ridder, NPR and "The Daily Show") in pointing out, and explaining the significance of, relevant facts that so many didn't care to notice, even when they were right there in plain sight -- and in the public record, if anyone bothered to pay attention.

He wasn't just a good reporter but a fine critic.

What set Krugman apart from most of those in the mainstream press was not just his exceptional lucidity but his determination to remain in "the reality-based community." To him, whatever some politician said about something was not as important as the thing itself. In a characteristically direct column last July 4, he wrote of the 2008 presidential campaign: "Again and again we've had media firestorms over supposedly revealing incidents that never actually took place." (Read that piece. You will not be shocked to see how dramatically conditions have not improved.)

Krugman deserved to win a Pulitzer for journalism. Tuesday, he won a Nobel Prize in Economics. I am overjoyed. But I don't really know anything about economics. Next year, I say, it's the Pulitzer for Krugman.

In an article for Fortune back in 1998, Krugman offered a theory about why English food -- internationally renowned for being really bad -- had been that way for so long, and why at long last it was getting so much better. He submitted that the descent into badness had to do with rapid industrialization, and the difficulties of delivering fresh, quality food to the big cities. This part made me think of the movies:

... by the time it became possible for urban Britons to eat decently, they no longer knew the difference. The appreciation of good food is, quite literally, an acquired taste--but because your typical Englishman, circa, say, 1975, had never had a really good meal, he didn't demand one. And because consumers didn't demand good food, they didn't get it. Even then there were surely some people who would have liked better, just not enough to provide a critical mass.

In these times of anti-elitist hysteria, the notion of quality itself can be made to sound suspect. And yet, food culture appears to be thriving these days as the population becomes more knowledgeable about the variety and quality of food, how it is produced and how it is prepared. Chefs are celebrities. The Food Network presents cooking as entertainment and education.

Is it possible that a similar film culture could embolden the popular appetite for movies? As palates become more adventurous, attuned to unfamiliar and sophisticated flavors, could tastes in movies develop and diversify as well? How might such a thing occur? Is there... any light in the darkness of inanity?

"It is now clear that, at least as far as domestic policy is concerned, the administration views terrorism as another useful crisis." -- Paul Krugman, New York Times, November 11, 2001