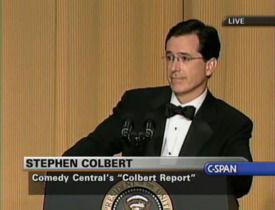 The thing about speaking truth to power is that the powerful don't really like it all that much. That was apparent at the White House Correspondents Dinner Saturday night, when Stephen Colbert of Comedy Central's satirical "The Colbert Report" (basically a Fox News parody in which Colbert plays a fact-challenged, egomaniacal character based on Bill O'Reilly -- and Sean Hannity, Britt Hume, Rush Limbaugh, Ann Coulter...) delivered a speech that cut maybe just an eentsy bit too close to the truth (or "truthiness") for the comfort of the President, the First Lady and the ineffectual reporters in the audience.

Editor & Publisher is offering a complete transcript of Colbert's speech -- which, I should say, I think was brilliant, both in substance and performance. And hilarious, too. (In some spots it reaches heights of rhetorical absurdity rarely attained in comedy, except perhaps by Firesign Theatre, Groucho Marx, and George W. Bush himself.) A few of my favorite passages:

Wow, what an honor. The White House Correspondents' Dinner. To actually sit here, at the same table with my hero, George W. Bush, to be this close to the man. I feel like I'm dreaming. Somebody pinch me. You know what? I'm a pretty sound sleeper -- that may not be enough. Somebody shoot me in the face....

I stand by this man. I stand by this man because he stands for things. Not only for things, he stands on things. Things like aircraft carriers and rubble and recently flooded city squares. And that sends a strong message, that no matter what happens to America, she will always rebound -- with the most powerfully staged photo ops in the world....

The greatest thing about this man is he's steady. You know where he stands. He believes the same thing Wednesday that he believed on Monday, no matter what happened Tuesday. Events can change; this man's beliefs never will.

But the rest of you, what are you thinking, reporting on NSA wiretapping or secret prisons in eastern Europe? Those things are secret for a very important reason: they're super-depressing. And if that's your goal, well, misery accomplished.

Over the last five years you people were so good -- over tax cuts, WMD intelligence, the effect of global warming. We Americans didn't want to know, and you had the courtesy not to try to find out. Those were good times, as far as we knew.

But, listen, let's review the rules. Here's how it works: the president makes decisions. He's the Decider. The press secretary announces those decisions, and you people of the press type those decisions down. Make, announce, type. Just put 'em through a spell check and go home. Get to know your family again. Make love to your wife. Write that novel you got kicking around in your head. You know, the one about the intrepid Washington reporter with the courage to stand up to the administration. You know - fiction!

Because really, what incentive do these people have to answer your questions, after all? I mean, nothing satisfies you. Everybody asks for personnel changes. So the White House has personnel changes. Then you write, "Oh, they're just rearranging the deck chairs on the Titanic." First of all, that is a terrible metaphor. This administration is not sinking. This administration is soaring. If anything, they are rearranging the deck chairs on the Hindenburg!

Clips of Colbert's speech (which received mixed reviews -- and deafening silence, including omission from news coverage -- from the people he was tweaking) have become a hot item on the Internet (including YouTube), and there's already a whole passage about the monologue and the response to it in Wikipedia's Colbert entry. Salon.com has full video of the speech itself and the filmed piece in which a terrified Colbert is stalked by UPI's Helen Thomas, the woman who has the whole Bush administration running for cover.

Initial coverage of the speech was, in some quarters, nonexistent. The New York Times, Reuters and the Chicago Tribune were among the outlets that covered the event but managed to avoid mentioning Colbert. E&P, among the first publications to report in detail about the speech and reaction to it (although Colbert's remarks were featured on CNN's "Reliable Sources" Sunday morning -- and he was profiled on Sunday's "60 Minutes," without reference to the previous night's speech), noted:

The New York Times, after failing to cover the Stephen Colbert portion of the White House Correspondents Dinner entertainment last Saturday, rebounded Wednesday with an article observing that his satiric routine had become "one of the most hotly debated topics in the politically charged blogosphere."

The article by Jacques Steinberg noted that Colbert's barbs that night had been hailed and condemned, while others "chided the so-called mainstream media, including The New York Times, which ignored Mr. Colbert's remarks while writing about the opening act, a self-deprecating bit Mr. Bush did with a Bush impersonator."

Dan Froomkin of the Washington Post analyzes the speech and the varied responses to it (from anger to elation) in a piece headlined "The Colbert Blackout":
Advertisement

Now the mainstream media is back with its second reaction: Colbert just wasn't funny....

Al Eisele , Editor-at-Large of The Hill, writes in Huffingtonpost.com: "The White House Correspondents Association's annual dinner, which I just attended, should go the way of the Linotype, the teletype and the typewriter.

"If ever there was anything that proves to the rest of the world that the Washington press corps is out of touch, out of synch and out to lunch, it is this awful Spring lemming-like migration of Washington journalists, politicians, lawmakers -- although to their credit they were few and far between -- lobbyists, political junkies and celebrity seekers to the Hinkley Hilton as the press kow-tows to the powers that be."

Not funny? I guess it depends on whether the current state of the nation, and the world, makes you feel like laughing or crying...