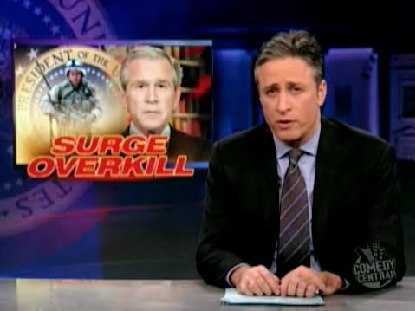 President Bush reminded me of the District Attorney in Chinatown (that is, in "Chinatown") the other night, as he stood in the White House "liberry," stiffly mumbling about his "new strategy" for Iraq, which amounts to: "As little as possible." Then Jon Stewart made me cry last night (with laughter and outrage -- and relief that somebody was telling the manifest truth) as he cut through all the lazy, endlessly recycled punditry about how Bush was "really putting it all on the line this time" (as he's been said to do every time he makes an empty gesture toward Iraq, or his Boratian "War of Terror"). Talk about creating a false sense of drama. Bush put nothing of himself on the line. He risked nothing. He did... as little as possible.

The only people Bush is putting on the line are the troops and the Iraqis. As Stewart pointed out, what is the addition of 21,000 more troops (returning the level to that of two years ago) supposed to accomplish that it didn't accomplish back then, when conditions were a whole lot better than they are now, and we still couldn't secure Baghdad? We have 130,000 troops in Iraq now, Stewart observed. Another 21,000 is a 15 percent increase. "That's not a surge, it's a gratuity. It's a tip," Stewart said. (Watch the whole segment here.) Perhaps Stewart's best metaphor for the President's actions: "He cooked up a giant, giant pot of shit, and looked at it last night and said, 'You know what that needs? ... A pinch of salt.'"

The real strategy? Do just enough to pretend you're trying, then blame the failure on the American people (for not supporting a losing strategy) and Congress (for not supporting a losing strategy) and the Iraqis (for being Iraqis). Amazing. Now here's a (bullshit) artist who shows nothing but contempt for his audience -- and his "characters" (i.e., the lives he's cynically and recklessly monkeying around with).

"The highest levels of casualties have occurred in the operations with the lowest levels of U.S. troops, suggesting an inverse ratio between force levels and the level of risk. Germany, Japan, Bosnia, and Kosovo had no postconflict combat deaths. The postconflict occupations in Germany and Japan proved relatively risk-free because both Japan and Germany were thoroughly defeated and because their govern- ments had agreed to unconditional surrender. The low numbers of combat deaths also show that postconflict nation-building, when undertaken with adequate numbers of troops, has triggered little vio- lent resistance. Only when the number of stabilization troops has been low in comparison to the population have U.S. forces suffered or inflicted significant casualties."

If Bush had proposed to send in 200,000 more troops I still would have thought it was a bad idea (being about three or four years too late), but at least I might have thought he was (once) serious about trying to bring stability, freedom and democracy to Iraq. One again, he's done nothing more than reveal what a bad bluffer he is.