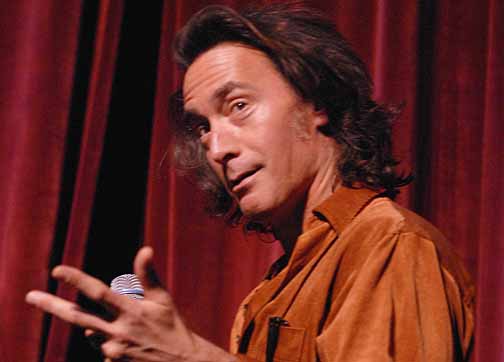 Writer-director Tom DiCillo in the limelight. (photo by Thompson McClellan)

After the Ebertfest screening of "Delirious" Thursday afternoon, writer-director Tom DiCillo ("Johnny Suede," "Living in Oblivion," "Box of Moonlight," "The Real Blonde" (1998)) recalled sending Roger Ebert an e-mail. He was in despair over the distributor's treatment of his latest film, which Ebert had reviewed quite favorably. Out of frustration, and although he'd never written to a critic before, DiCillo posed five pained (and semi-rhetorical) questions about the injustice of the movie business, the last of which was: "Is this all a Kafkaesque nightmare that will never end?"

Ebert wrote back and answered every question. To the final one, he said yes.

DiCillo accentuated the positive in talking about his film before a packed house at the enormous Virginia Theatre. He said it had taken him six years to make "Delirious," a (mostly) comedy about a low-end paparazzo (Steve Buscemi) who takes on a homeless kid (Michael Pitt) as his assistant. DiCillo wrote the part for Buscemi, but it took him a year and a half before the actor agreed to play it.

In his review of "Delirious," Ebert pointed out that Buscemi has 104 credits on IMDb. (That was in 2006; now he's got nine or ten more.) This is a guy who has only been making movies since 1986, playing an HIV-positive performance artist (still his favorite part) in the late Bill Sherwood's pioneering "Parting Glances." But there's a moment in "Delirious," when Buscemi's character almost breaks down talking about his father, that's more emotionally naked than anything else in his filmography. DiCillo said he suggested, just before the take, that he thought Buscemi was getting close to some issues with his own father. When the actor saw it, he asked DiCillo to take it out. He refused. You can understand how Buscemi might feel a bit vulnerable, but the moment needs to be in the movie.

DiCillo had a word about cinematic violence that I particularly appreciated (see Three Kinds of Violence): "The blink of an eye between two people can be as violent as a gunshot."