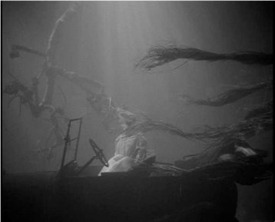 Herewith, a belated salute, on the occasion of the sailing of the revamped "Poseidon," to the late, great Shelley Winters. At a party of movie geeks on a rainy Seattle night -- the evening of her death (January 14, 2006) -- I hoisted a scotch in her memory and toasted some of her greatest moments -- which, as it turned out, seemed to revolve around death and water. Not only was she a terrific actress (in comedy and drama), but she is responsible for some of the most memorable liquid exits in movie history. Consider:

"The Night of the Hunter" (Charles Laughton, 1955): The image of the lifeless Winters underwater, still seated in her car, the long blond hair of her corpse waving in the current like seaweed, is perhaps the most surreally powerful and haunting image of death the movies have ever given us. 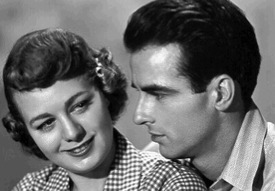 "A Place in the Sun" (George Stevens, 1951): Winters got her first Oscar nomination for this film (the Hollywood version of Theodore Dreiser's "An American Tragedy"), in which Montgomery Clift rows her out into Loon Lake with ambivalent feelings about gettin rid of her forever... in a scene with ripples of Munau's masterpiece, "Sunrise," flowing through it.

"Lolita" (Stanley Kubrick, 1962): As Charlotte Haze, the clueless mother of that nymphette Dolores (aka Lolita), Winters is the most irritating, bird-brained, desperate, pathetic creature in the universe... with the exception of James Mason's Humbert Humbert:

Humbert: Yes, I know the feeling.

Again, her death is linked with water: After all her illusions about her pedophilic husband and sexually precocious daughter are washed away, she is beset by despair and runs out into the rain to meet her sudden and pitiless fate. (Or is this a kind of suicidal mercy killing?) 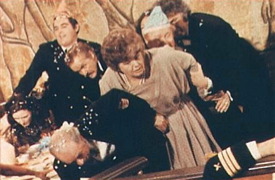 "The Poseidon Adventure" (Ronald Neame, 1972): Winters' fourth Oscar nomination (she won for "A Patch of Blue" and "The Diary of Anne Frank") was for Belle Rosen, the tubby swimmer who was probably a cousin of Charlotte Haze. It says a lot that she -- a heroine both whiny and plucky, comic and noble -- is probably the only passenger on the Poseidon that you care about. Or even remember an hour after the movie's over.

As I was fact-checking film titles, plots and dates on Shelley Winters, I came across this, from an interview with Graham Fuller in Interview magazine:

Graham Fuller: [Charles] Laughton directed you in "The Night of the Hunter." How did he film you in that incredible underwater shot where your character is drowned, her hair drifting like seaweed?

Shelley Winters: Oh, that wasn’t me. They used a model and made a mask of my face, which in those days was really torturous. They put a straw in my mouth, covered my eyes with little pads, and made a mold of my face with plaster of paris or something. It gets quite hot, and it’s very scary. I’ve drowned a lot in my movies - "A Place in the Sun," "The Night of the Hunter," "The Poseidon Adventure," and a couple of others not as distinguished. Underwater, I’m a superstar. [laughs]