Every once in a while circumstances have conspired to keep me from attending Ebertfest, but the main thing that draws me back are the people I get to see and watch movies with while I'm there, from David Bordwell (with whom I rode from Madison to Champaign-Urbana) to Festival Co-Conspirator Joan Cohl to The Man Himself, Roger Ebert, whose presence animates the event, even when he isn't in the on-stage spotlight.

For me, there were no major discoveries or revelations this year -- like, say, Jeff Nichols' "Shotgun Stories" or Yôjirô Takita's "Departures" or the astounding, mind-blowing 70mm print of Jacques Tati's "PlayTime" in past Ebertfests -- but that almost seemed beside the point. (Though I highly recommend a snappy, endlessly inventive low-budget picture called "Citizen Kane." It's terrific!)

I'm happiest hanging around, in the Virginia Theatre or the "green room" (where participants gather for lunch and dinner) with, to name but a few, some of The Demanders (a small group of writers I work with who cover VOD) or the Far-Flung Correspondents, who write about movies from their home bases all over the world: Egypt, Brazil, Turkey, South Korea... even Chicago.

So, while it was undeniably disappointing to learn that expected guests Patton Oswalt ("Big Fan") or Peyman Moadi ("A Separation") were unable to attend at the last minute, I was personally more disappointed that Kristin Thompson and FFCs Ali Arikan and Michael Mirasol (and a few others) couldn't make it.

The films in this year's Ebertfest were made between 1906 (the Edison Company's "Dream of a Rarebit Fiend") and 2011 (Asghar Farhadi's "A Separation"), and no matter how they were originally shot, all but one were projected digitally. (Jeff Nichols' "Take Shelter" was made and shown in 35mm.) 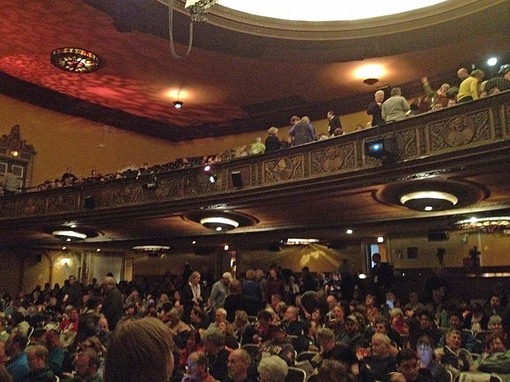 There were no complaints that I heard (no dirty, scratched, faded, splice-ridden old repertory prints here!) and one 35mm stalwart said the experience made him a digital convert. It's true: digital presentations can be spectacularly good. But, like 35mm presentations, they rely entirely on the quality of the print (or digital source), the size and condition of the screen, the caliber and maintenance of the projection equipment, and the skill and expertise of the projectionist. Shortcomings in any of those areas have always made for a lousy theatrical experience -- and that's why I've argued that the invasion of the multiplex in the 1980s has really been a more radical transformation of the moviegoing experience than the conversion to digital will be. It's going to be the same barely trained teenager pushing a different button, that's all.* Fortunately, all those things are in tip-top shape at the Virginia Theatre during Ebertfest.

(David Bordwell has been doing some invaluable research and writing about the real importance of the digital sea-change that will be essential to future motion-picture historians. Check out his series of blog entries titled "Pandora's digital box.")

I think I've mentioned before that the great film collector and historian William K. Everson once told me that he wasn't much interested in movies made after World War II. That was his passion, and there were more than enough movies to keep him happily watching and studying movies for the rest of his days. Perhaps it was the keen awareness that "film" as we have known it is vanishing rapidly from theaters, or the presence of movies like "Kane" and the Alloy Orchestra's selection of "Wild and Weird" trick shorts from the early days of cinema, or the approaching 2012 edition of the Sight and Sound critics poll of the best movies of all time that has been conducted every ten years since 1952, but I found myself in several conversations with young critics who volunteered (hypothetically, of course) that they really wouldn't mind if all new filmmaking ceased right now, because there are still so many great films from the last 100 years or so to nourish their cinephilia for the remainder of their lives. I have to say, I understand the feeling. 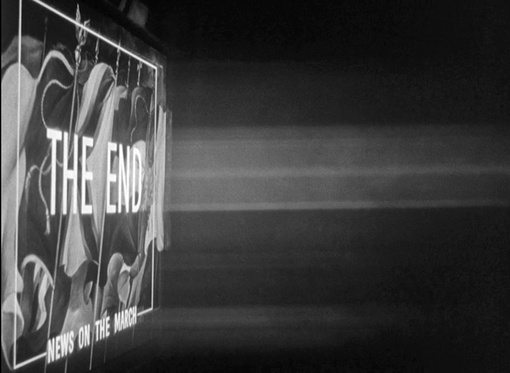 Speaking of "Kane," it was the final festival event, a Blu-ray disc projected onto the Virginia's huge screen, with Roger's 2001 voiceover commentary. I was skeptical about how a commentary would play in a crowded theater, but it worked like a charm. Afterwards, Roger sent a note to the stage, read by festival director Nate Kohn, apologizing to the woman in the lobby who wanted her money back because he kept talking through the whole film. (I thought it was a great joke -- but it turns out also to be true.) And I'm sure that the commercially available Blu-ray that was shown was superior to the first few times I saw "Kane" -- on television and in a 16mm nontheatrical print in a college classroom.

Having just conducted the Ebert Cinema Interruptus at the Conference on World Affairs in Boulder, where we payed close attention to the skillfully indirect manner in which the complex story was told (sometimes giving the audience information almost subconsciously) in Tomas Alfredson's "Tinker, Tailor, Soldier, Spy," I was particularly interested in some of Roger's observations about the structure of "Kane" -- how, for example, the newsreel at the beginning summarizes Kane's life story, so that the audience knows the "plot" from the start, and can retroactively fit the interviews and flashbacks into the chronology of Kane's life. Also, it was fun to watch how some characters are introduced without being identified -- something "Tinker, Tailor" also does ingeniously. 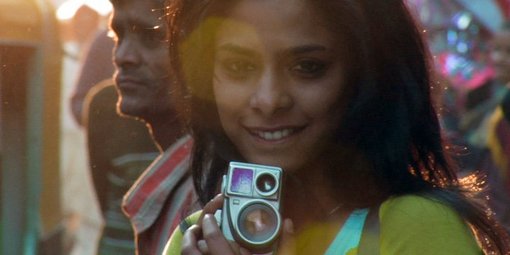 "Patang," the first film by Chicago-based Prashant Bhargava, attempts a simpler approach to a multi-threaded narrative (without time-shifts), but I think it's less successful. The characters are given text labels when they first appear (their names and their relationships to other characters), but that information is relatively useless because they haven't had a chance to register with the audience yet, and we haven't seen them interact. It does no good to be told that so-and-so is X's brother, when we have no idea who X is yet. That's the kind of thing that should become clear over the course of a scene in which we get to know something of their histories and personalities. To me, the picture feels unrelievedly frenetic and visually claustrophobic, shot in an HD video shakycam style (with lens flares galore) that shifts from telephoto longshots to macro close-ups (six inches from the actors' faces, as the director put it) -- and, for some reason, incorporating some not-very-convincing 8mm footage "shot" by one of the characters. Though only 92 minutes, it feels much longer. I never did figure out who these underdeveloped characters were or what of significance was happening (very little) between them (it all centers around a kite festival in Ahmedabad), but perhaps "Patang" was simply intended as an impressionistic montage.

Some movies have so deeply imprinted themselves upon my brain that I see them everywhere. I had a few moments like that watching Vera Farmiga's "Higher Ground." (Sony Pictures Classics co-prez Michael Barker informs me that her name is pronounced without the "r" -- Fah-MEE-guh.) It's based on a memoir (This Dark World, by Ebertfest guest Carolyn S. Briggs, who also co-wrote the screenplay) about a girl growing up in a community of Evangelical Christians in the 1970s and 1980s.

The moment I saw this image of Farmiga singing a spiritual... 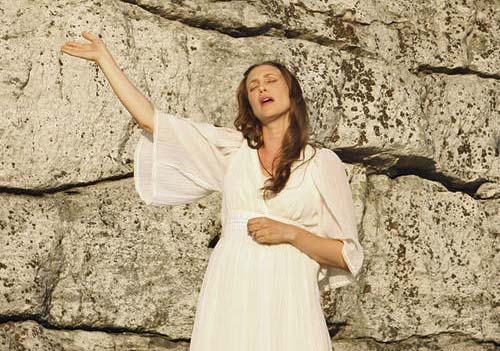 Did I immediately make this association simply because I love "Nashville" so much? Well, maybe. But then there's a wonderful scene in which Farmiga's character practices "speaking in tongues" in the bathroom (she's envious of those who can do it), and it comes out sounding like the chicken-clucking sounds Barbara Jean makes later in the scene above, when she has a little breakdown on stage. And then there's the use of the hymn "He Walks With Me" ("In the Garden"), which Barbara Jean sings in the hospital chapel at the end of the Sunday morning church montage in "Nashville." Could be a coincidence, I guess, but I'd love to ask Farmiga about it.

Jeff Nichols and Michael Shannon wound up talking quite a bit -- perhaps more than Nichols wanted to -- about the meaning of their second collaboration (as writer-director and actor, respectively), "Take Shelter." So, let that be a spoiler warning to you. There was a long dialog scene in his counselor's office where Curtis explicitly outlines his philosophical approach to life. But, as with "Shotgun Stories" (in which Nichols removed the scene explaining how Son Hayes got the gunshot wounds in his back), the director felt it was better to keep some questions open, so that the audience was invited to speculate about the answers rather than having everything explained for them in the movie. (The scene is included as an extra on the DVD/Blu-ray.) 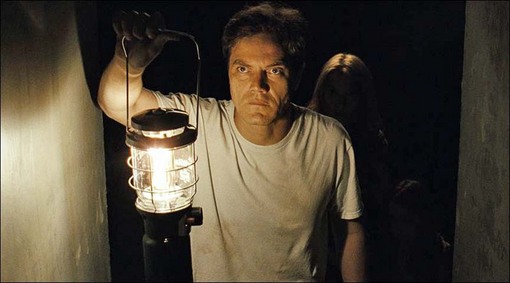 Nichols said he thought of ending the movie after the scene in the storm shelter but that it might have been too much of a "happy ending" if Curtis (Shannon's character) faced his fears and found out everything was OK. Nichols said he wanted nature itself to be the villain, which is why the film ends with more (real) storms on the horizon.

Finally, though, as Shannon pointed out, Curtis is reunited with his family and whatever troubles lay ahead they will face them together -- and that's what means the most to him. "Exactly. That's it exactly," Nichols said, bowing his head as if the truth had finally been wrung out of him. "That's it. Let's not talk about it any more."

You can watch the movie introductions, Q&As and panels from Ebertfest 2012 here.

* See Joe Morgenstern's review of "The Avengers" in the Wall Street Journal -- and his account of a lavish L.A. press screening foiled by cheap, run-down batteries in the 3D glasses. It took him three tries to get glasses that worked. (And "The Avengers" wasn't even shot in 3D -- merely retrofitted.) Morgenstern writes:

The technical screw-up was so upsetting that it may have skewed my judgment about the movie as a whole. I think I settled down, but I can't be sure, and I can't omit mention of the problem from my review.

The other reason has to do with the status of theatrical exhibitors as the weakest link in the 3-D process. (Some theaters have already been caught reducing light levels on the screen to extend the life of expensive projector lamps.) What happened to me and others at the ArcLight the other night was the height of absurdity. Here we were watching a production that cost somewhere in the neighborhood of a quarter-billion dollars. Yet our enjoyment was compromised by button batteries that can't cost more than a buck a pop. And we were an invited audience, privileged to see an advance screening, not moviegoers paying hefty premiums for their 3-D experience. I shudder to think what they see. 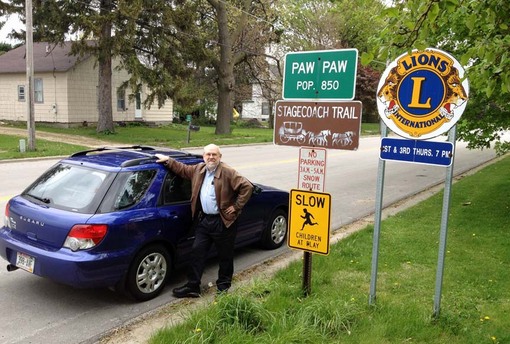 David Bordwell: A man and his stagecoach. 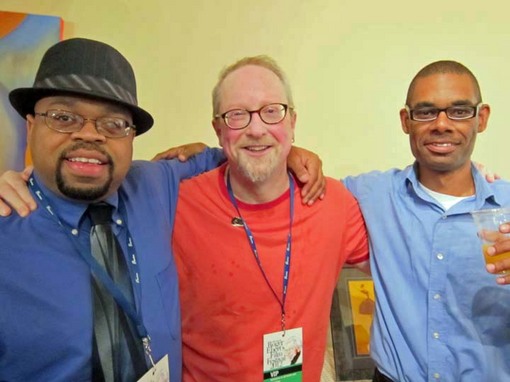 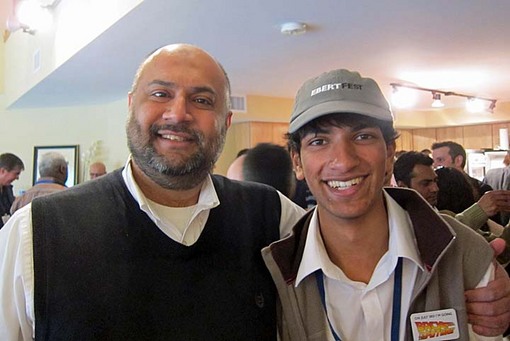 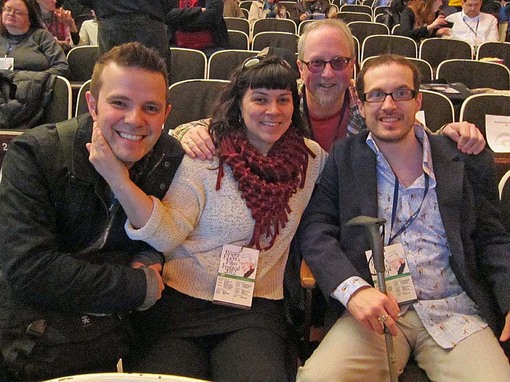 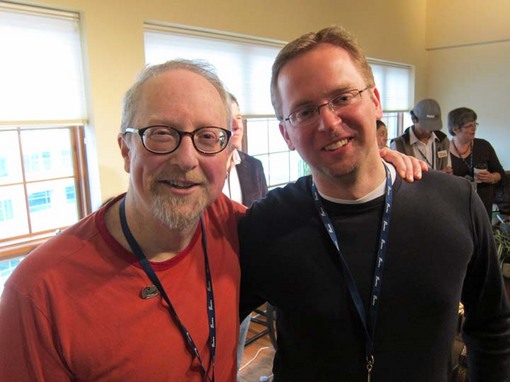 Jim (looking an age-appropriate 87) and Michal, who has been named Critic of the Year in Poland! (The high angle is because Omer took the picture.) BTW, we love side-hugs.