So here it is at last, "Waterworld," two years and $200 million in the making. In the old days in Hollywood, they used to brag about how much a movie cost. Now they apologize. There's been so much publicity about this movie's budget that a review of the story seems beside the point; I should just print the spreadsheets.

The cost controversy aside, "Waterworld" is a decent futuristic action picture with some great sets, some intriguing ideas, and a few images that will stay with me. It could have been more, it could have been better, and it could have made me care about the characters. It's one of those marginal pictures you're not unhappy to have seen, but can't quite recommend.

The movie begins with the trademark Universal globe spinning in space, and then we see the polar ice cap melting while a deep voice (not James Earl Jones for a change) sets the story in "the future," when all of the Earth is covered in water. Cut to Mariner (Kevin Costner), aboard his trimaran, a sailing vessel that looks made out of spare parts from "Mad Max." The first shot of an action hero is supposed to set the tone for a movie; remember your initial glimpses of James Bond or Batman, and compare them with "Waterworld," which shows Mariner peeing into a bottle, pouring the fluid into a home-made chemistry set, cranking a handle to process it, and then drinking it. Then he gargles, and spits on his little lime tree, so we know how he gets fresh water and vitamin C.

I would have welcomed more of those details about the global floating culture that Mariner is a part of. But like so many science fiction movies, this one bypasses the best possibilities of the genre: Instead of science and speculation, we get a lot of violent action scenes.

Mariner is a loner, a "mutie," or mutant, with gills behind his ears, and webbed feet. He goes to trade at a big floating "atoll," which is like a seagoing version of the post-apocalyptic city in "Mad Max Beyond Thunderdome." He has something they want.

"Mmmm!" says a trader. "Pure dirt! 3.2 kilos!" He trades it for cash, spends some of it at the bar, and meets Helen (Jeanne Tripplehorn), the bartender. Then he offends the locals by refusing to contribute to their gene pool, and is locked in a cage when the fortress comes under attack from Smokers - renegade outlaws who prowl the seas in souped-up jet skis.

The leader of the Smokers is Deacon (a chain-smoker, of course), played by Dennis Hopper as another of his violent cackling loonies. Hopper is the standard-issue villain of the 1990s, and his appearances would grow tiresome if he weren't so good at them, adding weird verbal twists that make his characters seem smarter and more twisted.

The Smokers' attack on the atoll is a virtuoso action sequence, including stunts where guys on jet skis speed up a ramp and fly over the atoll walls, landing in the lagoon inside. (It's a little strange to see Hells Angels types doing the same basic water-ski stunts perfected 50 years ago in all those Esther Williams pictures set at Cypress Gardens.) Mariner is freed by Helen, whose price is that he must help her and a young girl named Enola (Tina Majorino) escape. He's forced to agree, and soon they're sailing the high seas and squabbling ("This is my boat, and I got it the way I like it"). Mariner would just as soon throw Helen and the girl overboard, but we know the obligatory outcome: He'll get to like them. He does, grudgingly, and then discovers the Smokers want the girl because she has a map tattooed on her back that shows the way to land. The relationship scenes are pretty grim, apart from a long-delayed kiss and a breathtaking visit beneath the waves to visit a drowned city.

There are a lot of amazing props in the movie, including various flying and sailing machines and medieval; futuristic weapons.

And a few smiles, as when the Deacon's ship turns out to be the Exxon Valdez (with a portrait of Captain Joe Hazelwood still on display). I am not quite sure, however, that I believed the scene where Deacon fires up his men with promises of dry land, and they all troop down into the hold of the Valdez and start rowing it like a Roman galley.

Kevin Costner obviously decided to play his character as a poker-faced outsider, not entirely human, and although that's a logical choice it isn't a very entertaining one; Mel Gibson, in a similar role as Mad Max, went for energy and good humor, and was more fun. There is also a certain lack of imagination in the story. These floating people have the whole globe to explore, but they seem to hang out in the same small patch of sea with the same characters. Are there different cultures elsewhere? Different adaptations to the flood? The movie doesn't care.

It's said "Waterworld's" first cut was a good deal longer than its final 120-minute running time, and you can sense that occasionally, as when the Mariner fights off an attack by the Smokers and then immediately takes Helen on the trip beneath the sea, when it seems the Smokers must still be in sight. But basically the movie plays smoothly as a combination of chases, fights, bizarre locations, special effects, and the cold, distant, slowly thawing behavior of Mariner toward his passengers. I'll remember some of the sights in "Waterworld" for a long time. But I won't necessarily want to see them again. 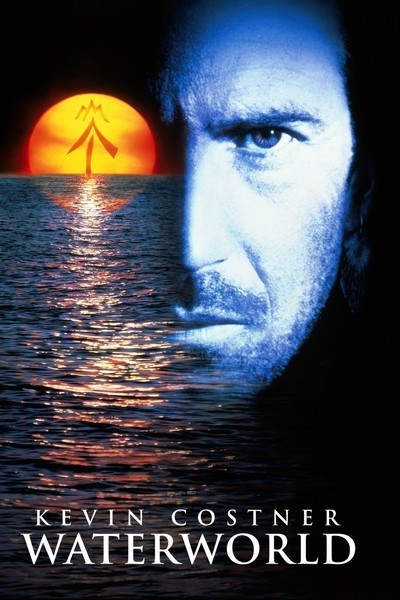 Rated PG-13 For Some Intense Scenes Of Action Violence, Brief Nudity and Language