Product placement: The lives of 'The Sopranos' 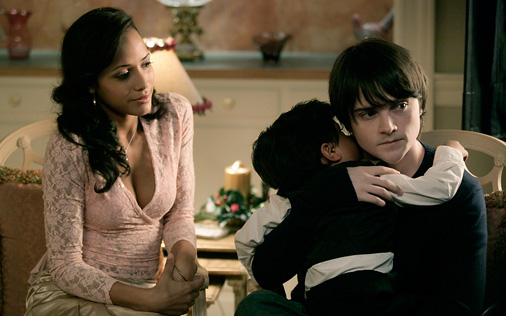 Never send a business reporter to do a critic's job.

I'm sometimes amused by the naïveté of my critical and academic colleagues when it comes to the business realities of how movies are made, and why they turn out the way they do. They tend to view movies as a purely creative medium, and dismiss the influences of marketing and commerce on the "end product." But, on the other hand, whenever I read reports about "the biz," I'm equally amazed at how they approach movies as if they were factory-tooled widgets, nothing more than the products of corporate and marketing deals and decisions. The truth is, of course, that most movies are creative compromises, the results of a vast and complex set of inter-related artistic, commercial and economic judgments.

You'd never know that from Jon Fine's series of posts at his Business Week Fine On Media blog about so-called "product placement" in this season's episodes of "The Sopranos." Fine thinks the proliferating brand-name mentions are "suck-uppy" and rates them on a "one-to-ten scale of egregiousness" -- although, he reports, "'The Sopranos,' a show I like very much, does not do product placement in the fee-for-sense. Nor does HBO, although at times they've played footsie with the idea."

Fine doesn't acknowledge that there may be a number of creative reasons why real products and brand names are used on the show -- aside from the usual deals that allow nearly all movies and TV shows to keep their budgets down by gaining access to free consumer goods, from cars to soft drinks, that are used on screen. "The Sopranos" happens to be about people for whom bling means just about everything, despite all their talk about maintaining old-fashioned "family values" (you know, like omerta). It's a show about people in a strictly hierarchical social structure (organized crime, the mob, La Cosa Nostra)who pursue crass, vulgar, conspicuous consumption as a signal to others that they're advancing their station in life. Their lives are all about "product placement."

A few things to keep in mind about "The Sopranos," which concluded its sixth season (beautifully) last night:

Expanding on that last point: The season six closer featured a parody of a "sit-down" from "The Godfather," the dialog riddled with the usual awkward and pretentious malapropisms, that played like a hilarious amateur production. Of course, it ended disastrously. (Little Carmine: "And for reasons I will discern in time, believe me, if there's one thing my father taught me it's this: A pint of blood costs more than a gallon of gold. My business -- all of our businesses -- this infighting's costing money." Tony: "I'm willing to move forward. Let the past be bygones.")
Advertisement

And the final tableau, of the Sopranos' suburban palace in all its finery, decorated for Christmas with the family gathered round the hearth, was presented as the most meticulously composed and fragile of images, one we know is phony, impossible to maintain, and destined to be shattered in the final season. It was heartbreaking, breathtaking. Bianca, AJ's new Puerto Rican girlfriend (sporting a bling-y necklace AJ's bought her, mainly to show off to his dad), and her son Hector, join the Soprano clan for a moment of (what looks like, to her) heartwarming, ritualized domestic bliss on Christmas Eve. The last words:

Blanca: You have a gorgeous home.

And with that, the camera receded, "Silent Night" faded into the Stones' "Moonlight Mile" (which had been used brilliantly in the episode's opening minutes -- "With a head full of snow"), and we knew that we were seeing not only a carefully crafted, Christmas-card illusion, but the calm before the storm (i.e., the final eight episodes). All the Sopranos are just another a moonlight mile down the road from home. They sometimes feel "home" is close, but they can never quite get there. (And remember that this episode is named after a character who does not exist -- a multiple deception: Christopher, who's hiding the fact that his wife is pregnant, is cheating on her with Julianna, who Tony is hot for, but telling him he's seeing a black girl on the side named "Kaisha.")

"A gorgeous home." That's what the whole season led up to. (Carmella is literally trying to build a "gorgeous home" -- a spec house -- but she's had a few problems with the building inspectors.) Earlier in the episode, Tony has attempted to reassure a stressed-out Carm: "You raised two gorgeous kids, you gotta husband that loves you, you made us a beautiful home. Doesn't that count for something?" This scene began with a close-up of a packaged Murray's "All-Natural Turkey," intended for Thanksgiving dinner -- and followed scenes involving a human head in a freezer; "the Sheepshead Bay barbeque" bombing; Tony closing the deal to sell the building housing the family-run Cavulo's Live Poultry to Jamba Juice; Christopher and Kelly, his recently impregnated wife, discussing how to paint/brand the nursery (Kelly: "'Morning Sunshine,' Benjamin Moore. And we can do the border with the Disney characters") in their beautiful new McMansion home, and Christopher telling her: "Remember the penguin movie, how you cried? You sit on an egg for months, one little thing goes wrong, you're left with nothin'"; and Carmella visiting Ade's suicidal mother in the hospital, bearing a bouquet of florist-brand, plastic-wrapped flowers. You may see a few motifs running through here -- birth, death (in particular, the death of children), ice, corpses, birds, brands, the idea of raising children and creating a home... and they're all interwoven. (Oh, but I forgot: Movies are just about the story, right?)

So, is all this just "product placement"? If you think so, you're not paying much attention to what's going on.

Which brings me back to Fine's comments. I don't see how the series could have been more explicit about its view of consumerism than in the sequence that opened the first episode of this season -- a series of images of prominent brand logos, and the characters who associate themselves (and define themselves) with them, while William S. Burroughs reads about ancient Egyptian mythology from his "Seven Souls":

In addition to offering what may be some tantalizing foreshadowing of the fates of these characters, all this is the set-up to an episode in which -- to cite just a few of examples -- Tony will buy off Carmella with a Porsche Cayenne; Angie, Carmella's friend (and Big Pussy's widow) gets a Corvette, to Carm's consternation; Eugene will attempt to buy off Tony with a bag of "18-carat gold, diamond center" David Yurman watches; Tony will help himself to Armani sunglasses at the shop of Johnny Sack's brother-in-law, as a way of demanding "respect"; Christopher offers to buy Johnny's Maserati, when Johnny needs to "get some liquidity out of it"; and so on....
Advertisement

All this stuff is essential to the show. It would only be distracting if they made up brand names. (Anybody recall how Stanley Kubrick used existing brands -- Pan Am, Hilton -- to lend credence to his vision of the future in "2001: A Space Odyssey"?) Whenever I see stupid stuff like this "product placement" tracking blog posts, showing no regard for how the show is using brand names, I'm reminded of those idiotic "gaffe squad" trivialists who spend their time looking for continuity errors rather than actually paying attention to the movie.

P.S. Early in the season, Tony articulated his mid-life crisis by saying: "I'm 46 years old. Who am I? Where am I going?" Reminds me of the great painting by Paul Gaugin, "Where Do We Come From? What Are We? Where Are We Going?" -- the work that Gaugin saw as the culmination of his life and work, and after which he planned to commit suicide. Those are pretty much the eternal questions, no?