Precious Based on the Movie Female Trouble by John Waters

My previous post, Impressions Based on the Hype for the Movie Precious Based on the Novel Push by Sapphire, was an account of exactly that -- how even limited exposure to advance word for the movie over 11 months, from Sundance in January to theatrical release in November, created expectations that made me not want to see it. What follows are my impressions when I finally did.

UPDATE (12/24/09): "I didn't have the sensibilities of your ordinary filmmaker, let alone your ordinary African-American filmmaker. My heroes were John Waters, Pedro Almodovar, and actors that were part of that world. Different." -- Lee Daniels, June 2009

None of us is immune to movie publicity, unless we're lucky enough to see the picture well in advance of its theatrical release (perhaps at an early film festival screening) -- or stay away from publications, television, radio, the Internet and any form of communication with other people until we can see it. In the case of "Precious: Based on the Novel Push by Sapphire," I reluctantly came to feel that I knew all-too-well what to expect: a grueling torture-fest of a movie that would culminate in an equally manipulative upbeat ending.

Turns out, it is all that, but it's also something else I hadn't anticipated: funny. Yes, it's a rags-to-redemption "social problem" movie, but at the same time it's a consciously camped-up fairy tale, complete with Evil StepMother. It's a showcase for two heartfelt bravura performances (by Mo'Nique and Gabourey Sidibe) and an often laughably overwrought melodrama -- not just because of the horrors it depicts but because it's fully aware of how shockingly high it stacks the decks against its heroine. "Precious" is a virtual remake of John Waters' 1974 "Female Trouble," which makes for a crazy, volatile clash of tones and textures. 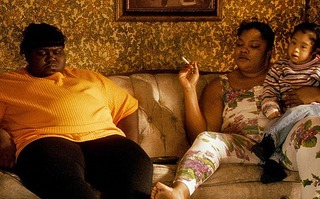 What director Lee Daniels has done (quite deliberately, it appears) is take Dawn Davenport, the larger-than-life delinquent played by Divine, as a source of inspiration for Precious's tantrum-throwing, cha-cha heels-wearing mama Mary (Mo'Nique). Then he tosses in a beautiful light-skinned lipstick lesbian fairy godmother (Ms. Rain, played by Paula Patton), some cheesy escapist glamour-fantasy sequences (featuring a handsome boyfriend character the credits identify as "Tom Cruise"), and a comical all-girl chorus of wise-cracking GED English students who are assigned to write fairy tales. (Correction: One of the girls is a transsexual/transvestite, but it was unclear to me which direction she's going at this particular moment in her life.) Daniels' directorial sensibility is more garish and flamboyant than Waters' (this isn't kitchen-sink melodrama; it's everything plus the kitchen sink melodrama), but he displays a similar affection for his oversized female characters. Whatever its other ostensible subjects, this is a movie about drag queens acting out.

I mean no disrespect to the serious aspects of the picture -- and certainly not to real victims of child abuse. I'm not saying that "Precious" plays only as a broad black-comedy, or that I spent most of my time laughing with or at it. It contains some pretty harrowing stuff, but the humor does sometimes keep it from being unbearable to watch. Still, the cartoonish glimpse of 300-pound mama (giving Divine's Babs Johnson from "Pink Flamingos" a run for her money in the quest for title of Filthiest Person in the World) waddling down the hall in her slip, awkwardly carrying a bulky portable television set, is appallingly, gasp-out-loud funny. You know neither Precious nor the baby, at the bottom of the stairwell, is in any real danger from this desperately klutzy maneuver -- it's the drop that counts -- and it's played for slapstick shock-laughter. As is the eat-your-hairy-pigfoot scene, just one of the film's indulgences in grotesque gross-out comedy.

We get a laugh near the beginning when Precious nearly beats the crap out of a mouthy male student in a class taught by a math teacher on whom she has a crush. (He later comes alive in a photo album and flirts with her, in a scene borrowed from Gus Van Sant's "My Own Private Idaho.") Precious, though a victim, is no helpless wallflower -- but, like Dawn Davenport's daughter in "Female Trouble," her bullying mother has convinced her that she's intellectually retarded. Later, mama throws on a wig and a floral-print outfit for an interview with the welfare lady (this is 1987) and struggles to control Precious's first incest baby (a Down's Syndrome child), which she uses as a prop. (Seen anything like that recently?) It's a pure Waters scene, with mama dressing herself up and talking nice and sweet to get her money, all the while barely repressing her rage (though not for long) at the innocent child she can't control. Tragedy played as farce. 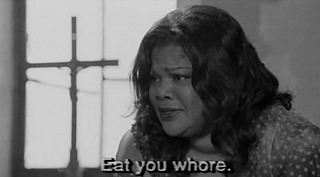 There's even an outlandish scene in which Precious and mom, who learned her manners from Jerry Springer and usually has the TV tuned to game shows, sit down to watch Vittorio De Sica's 1960 "Two Women" -- in black-and-white, in Italian, with English subtitles. (This is the same girl who will say of a conversation between two bourgeois lesbians: "They talk like a TV channel I don't even watch.") Precious then imagines her way into the movie, with mother speaking abusive language in subtitled, incongruously tender Italian: "Eat you whore."

When Precious shows up at her alternative school with her new baby, wrapped in a bloody blanket, one of the girls finds it contagiously hilarious, especially when everybody realizes the blood isn't the baby's -- just Precious's. Like Tyler Perry's Madea movies (or, say, the swaggering Southern tragi-comedy "Steel Magnolias"), "Precious: Based on the Novel Push by Sapphire" has the broad, caricaturish sensibility of a drag show. That's not necessarily a compliment or a criticism, just the vibe I get from the movie. (And if they're not mounting parodies of "Precious" in West Hollywood bars already, they soon will be.)

After I saw "Precious," I caught an online DP/30 video interview director Daniels did with David Poland at The Hot Blog. He talked about the way he worked with his actors, and recalled shouting out ever-more-outrageous insults for villainess Mo'Nique to hurl at Gabby Sidibe, causing them to crack up at the craziness of it all. Their delight in pushing themselves to get as nasty as they want to be (and even nastier) definitely comes through the screen:

"[Mo'Nique] goes, 'You bitch!' I say, 'Nah, call her a fat bitch.' 'You fat bitch!' 'Nah, call her a 'fat black bitch.' So, at this point, Gabby's at the top of the stairs, hysterical... Mo'Nique has to stop because it becomes... hysterical: 'This woman's crazy, and Lee, you're making her crazier with each new word you tell me to say!' And Mo'Nique is a comedian...."

On the serious side, "Precious" avoids the risk of getting too serious. The movie is more successful at comedy than at pathos because everything stays right on the surface -- spelled out in narration, dialogue, and plotting. Presenting Precious's parents as freak-show monsters is about as deep and dark as it gets. (Spoilers follow until the "Be Black, Baby" paragraph.) Except for a few brief, impressionistic flashbacks, the movie doesn't dare dig into Precious's emotional past -- her feelings toward her pedophile/rapist father, or what the dynamics of the household were like, between rapes, when he was living there. 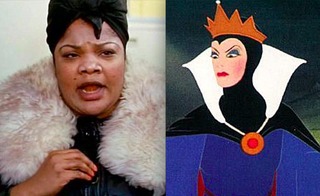 Mother Mary delivers a dramatic speech (we know it's a performance -- whether what she says is true or not) about how her husband molested their young daughter while they were all together in bed and he was sucking milk from her teat, even though she'd long since stopped breastfeeding the girl -- her man kept her milk coming -- and she was jealous of the baby for stealing her lover. So, that's effed up no matter how you slice it. Yet she defiantly (seriocomically) maintains that nobody should judge her. Precious, however, certainly does. And the counselor, Mrs. Weiss (Mariah Carey), definitely does, exiting the scene as though she's about to vomit. (Don't blame her.) And the movie absolutely sure as hell does. Mary is rightly condemned to movie-hell (non-existence), when Precious tells Mary she won't be seeing them anymore. It's meant to be a breakthrough. Precious walks out, the newly self-realized teenager carrying her babies into the street for a speciously triumphant finale as she marches off to... what? It's a good place to end the story.

The movie's strategy, from the beginning, is to dump one or two sensational bombshells on us at a time, usually in the form of revelatory expositional dialog: Meet Precious, an obese and inarticulate black girl who lives in poverty with her mother in Harlem. Precious is illiterate. And her mom berates her, throws objects at her and kicks her. And she once had a child by her father, who raped her. And that child, now being raised by a grandmother, has Down's Syndrome and they call her Mongo (as in "mongoloid"). Oh, and she's currently pregnant with a second child by her father. And did we mention that the father has AIDS? And Precious is HIV-positive, too? And...

Sapphire says she based her novel on memories of people in Harlem in the 1980s. All of them, apparently. This is one hell of a composite character. Throwing everything into one story -- even if each individual thing is based in reality -- does not necessarily make for a tale, even a fairy tale, that works as drama. Better as comedy.

The one thing that genuinely troubles me about "Precious: Based on the Novel Push by Sapphire" (and, yes, I love using the proper title, just as I long have with "The Decline of Western Civilization II: The Metal Years") is not that some people have taken it seriously (it's serious and funny), but that they have taken it literally. 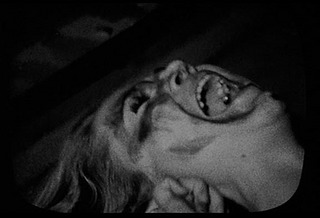 Flashback: "Be Black, Baby" is a satirical black-and-white documentary for National Intellectual Television that's plunked down into the middle of De Palma's 1970 "Hi Mom!," starring Robert De Niro. The cinema vertité conventions (hand-held camerawork, b&w, naturalistic/improvisational acting, etc.) suck you into an experimental theater production that physically and emotionally abuses members of a mostly suburban, upper-middle-class white audience under the guise of revealing to them "what it's like to be black in America." One white woman, painted in blackface, is raped with a broom handle by whitefaced African-American actors. (This is decades before "Irreversible," and almost as unwatchable.)

The pitch-dark "joke" at the end comes when the cast bids the survivors a cheery goodnight ("Be black, folks!"), and the audience members are interviewed for the cameras. "Wow, Clive Barnes was really right..." "It made you feel what it felt like to be a Negro -- to be black." "It really makes you stop and think. Certainly I've worried about the problems -- you could almost say the sicknesses -- in our society, but ... it was invigorating..."

I fear that "Precious" offers some audiences a similar kind of extreme exposure that makes them feel they've "learned something real," when they've really just been put through a manipulative, melodramatic wringer. At the end of "Be Black, Baby," the actors complain that they don't think their audience has learned a thing. I don't think Daniels and crew are that naive, or that cynical. But I give them credit for their sense of humor.

Here's a more formal review, by Jamie S. Rich at DVD Talk, that articulates many of my own feelings about "Precious: Based on the Novel Push by Sapphire" quite well.