Opinions: Are they really worth a damn? 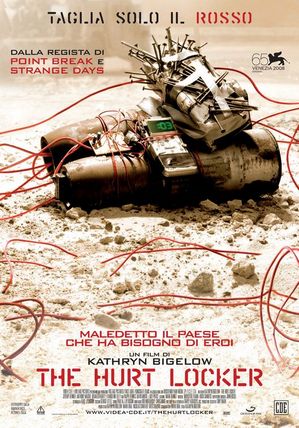 Do you agree that Kathryn Bigelow's "The Hurt Locker" is a terrific movie? Well, Nile Gardiner of the Daily Telegraph also thinks so. Does that mean you agree with him? He says that it's one of "The Top 10 Conservative Movies of the Last Decade." Here's the way he sees it:

What is refreshing about the film is its willingness to portray the US military presence in Iraq in an overwhelmingly sympathetic light, and the al-Qaeda-backed enemy as barbaric and fundamentally evil. There are no shades of gray in "The Hurt Locker," and this is a strikingly patriotic motion picture that has been embraced by an American public weary of the anti-Americanism churned out by Hollywood in its portrayal of the War on Terror - from "Rendition" and "Lions for Lambs" to "Redacted" and "In the Valley of Elah." "The Hurt Locker" is by far the best conservative film of 2009, and one of the greatest of the decade.

I hope this example persuasively illustrates several things (and why Kathryn Bigelow and James Cameron got divorced is not among them¹):

• Any number of logical fallacies in which a comparison on one level may be accurate but cannot be used to make comparisons on other levels. So:

• Why an opinion is meaningless unless you know what it is based upon. We might call this the RottenTomatoes Fallacy. Leaving aside the accuracy with which the editors determine what constitutes a 'Fresh' review and what constitutes a "Rotten" review, telling me that X percentage of reviewers "liked" the movie, while Y percentage did not, tells me absolutely nothing about the movie. For all I know, any or all of those reviewers may have liked or disliked the movie for reasons with which I disagree, or for things that aren't even in the movie -- or they have appreciated the movie for what I see as its flaws or criticized it for what I believe are its merits.

So, I would argue that "The Hurt Locker" is an immediate, immersive experience (coincidentally in ways that "Avatar" is not), putting you into the boots of men whose job is to find and safely disarm or discharge IEDs in a physically challenging, uncertainly hostile environment. It's very narrowly defined. (Think of the pilots flying mail over the Andes in Howard Hawks' "Only Angels Have Wings.") The movie doesn't ask who put them there.

The moral world of "The Hurt Locker" is, contrary to what Gardiner writes, entirely shades of gray. That's what it's about: trying to differentiate friendlies from hostiles in a world where it's nearly impossible to tell from moment to moment which is which. If you want to make the argument that the movie is patriotic (and I don't, but I could), that is why: because the Americans are shown trying to defuse bombs that present a threat to themselves and civilians. Not because it portrays "the al-Qaeda-backed enemy as barbaric and fundamentally evil." (What about the man in chains near the end? Is his dilemma portrayed as strictly black-and-white -- regardless of how he got into it?)

Do you have any stories about believing that you "agreed" or "disagreed" (those dreaded terms) with someone about a movie, only to find out that you weren't necessarily seeing the same things in it?

¹ That particular logical fallacy would, let's see, I guess go something like this: