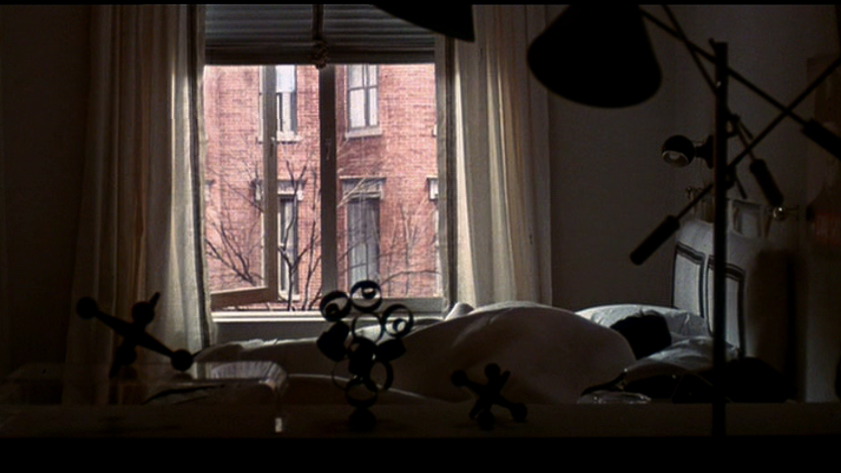 What do we have here? It's the opening shot of one of my favorite 1970s comedies, a dark absurdist urban paranoid masterpiece called "Little Murders" (1971) written by Jules Feiffer ("Carnal Knowledge") and directed by Alan Arkin (as was the second, successful run of the play in New York in 1969; the first staging a year earlier closed in a week). As you might guess, it's a movie about windows and frames. Look out any window, and there's another one looking right back at you -- with a telescope, a camera, maybe even a gun. After a while, you don't want to know what's out there. You shut off the TV, bar the windows and bolt the door just to keep the madness... out?

Elliott Gould plays Alfred, a listless, benumbed photographer who shoots piles of dog shit. That's his subject. In this shot, Alfred is somewhere outside the window, getting beat up. That's Patsy (Marcia Rodd) in bed. The sounds of Alfred's mugging are drifting in her window, but that's not what awakens her. It's the phone -- another call from the heavy breather (in an era where "obscene phone calls" were the latest in pornographic technological phenomena). But although the image may at first remind you of Kitty Genovese (the murder victim whose screams were ignored by neighbors in Queens), Patsy intervenes. And that's the way it all begins.

Arkin jump-cuts into the scene a few times as the credits appear, in a way that reminds me of the percussive cuts of Harvey Keitel waking up (to the Ronettes' "Be My Baby") at the start of "Mean Streets" (1973). By the end of the film, the windows will be flung open again, to let the fresh air in... and the sniper rifles out.

P.S. Roger Ebert's original 1971 review of "Little Murders" gets at why I think it's such a good, and disturbing, comedy. It doesn't tell you when it's OK to laugh:

Arkin said, shortly after the film was released, that he'd only seen his movie once in a theater, and he was afraid to go again. When he saw it with an audience, he said, he thought it was a flop because there was no pattern to the laughs. People were laughing as individuals, almost uneasily, as specific things in the movie touched or clobbered them.

That's my feeling about "Little Murders." One of the reasons it works, and is indeed a definitive reflection of America's darker moods, is that it breaks audiences down into isolated individuals, vulnerable and uncertain. Most movies create a temporary sort of democracy, a community of strangers there in the darkened theater. Not this one. The movie seems to be saying that New York City has a similar effect on its citizens, and that it will get you if you don't watch out.