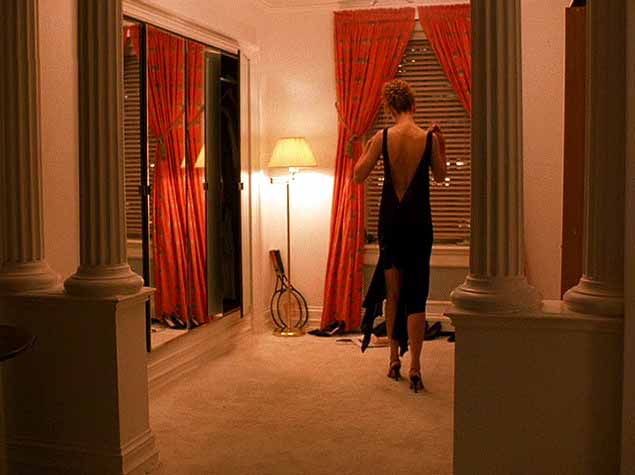 When the release of "Eyes Wide Shut" drew near, a lot of the buzz was around it being a "sex film," and some (fools) went as far as to claim that its ambition was to be the "sexiest film ever" (after all, Kubrick had broken the molds of other genres). After "EWS" came out, the buzz was that it was a letdown -- due largely to the fact that it was "not sexy." Subsequently, many felt that it was a sub-par film, almost unworthy of the Kubrick moniker. 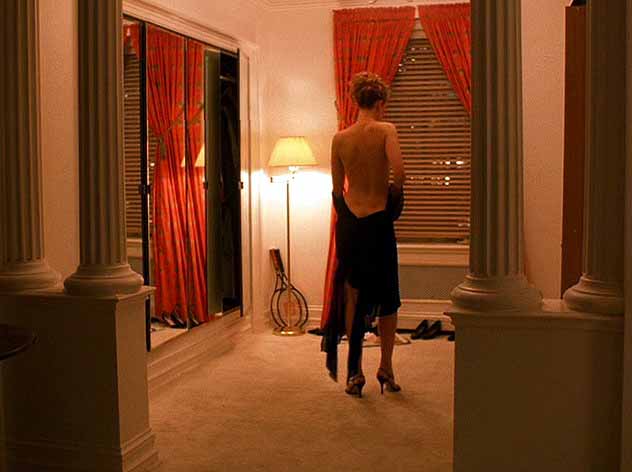 Unfortunately, they missed the point. The opening shot to "Eyes Wide Shut" is short and simple: Nicole Kidman's character getting undressed. I'm sure many saw this as a tease, a promise of what's to come. But I believe Kubrick was using it for the exact opposite purpose, telling us to forget about our preconceived notions of what this film was going to be (or, as you pointed out, Jim, what a narrative should be). In essence, the shot is so brief that it's almost as if Kubrick is saying "Okay, here: Nicole Kidman naked. Satisfied? Now get that out of your mind and let me tell my story." Many films don't have their nudity so early on, so perhaps Kubrick put that quick flash in there to see if we're paying attention. The next time we see Kidman, she's doing something very unsexy (using the toilet), and further events tell us that some things are not what we expect them to be (for example, Tom Cruise's character turning off what we believe to be the background score).

Yes, more nudity follows in the film, from Kidman and many others, but Kubrick is telling us that the nudity and sex is not really the point; he's not setting out to make the "sexiest film ever." What is his point, then? I'm not sure. It's a film that can be watched many times and still not be totally understood -- just like some other great Kubrick films.

JE: You're quite right, Jonathan. That eye-opening first shot IS a ravishing tease, but not in the way viewers might expect -- plucked out of time and space, floating in isolation between the white-on-black titles for Cruise/Kidman/Kubrick, and the name of the movie itself. Blink and you'll miss what Kubrick is doing from the moment the picture starts. "EWS" had been accompanied by the usual hyperbolic pre-release rumors that invariably swirled around rare and secretive Kubrick projects while they were still in the works. In 1979/80 "The Shining" had been touted in advance as "the scariest movie ever made" (did Kubrick really say that was his goal?) and in 1986/87 "Full Metal Jacket" was anticipated as as "the ultimate Vietnam movie" (whatever that was meant to mean). This sort of buzz, whether or not inflamed by Kubrick himself, helped intensify general interest in the movies but, as you point out, it was also ultimately misleading. Kubrick, more than any other filmmaker, taught me not to get distracted by the movie I was expecting, and to simply watch what was happening on the screen instead -- because "The Shining" and "Eyes Wide Shut" were absolutely NOT the movies I thought I saw the first time I watched them.

Allow me to riff a little on this "EWS" shot: The first thing you notice is, of course, Kidman dropping her dress. The dominant color is the (warm, feminine) red of the drapes that frame her -- and that are reflected in the mirrored closet doors to the left. The shot is not perfectly symmetrical, but in addition to the reflected curtains and the fleshly symmetry of Ms. Kidman, there is a lot of twinning going on here: Two pairs of identical columns mask the image; a couple of overlapping tennis rackets lean in the corner; pairs of shoes are lined up, rather haphazardly, underneath the window... 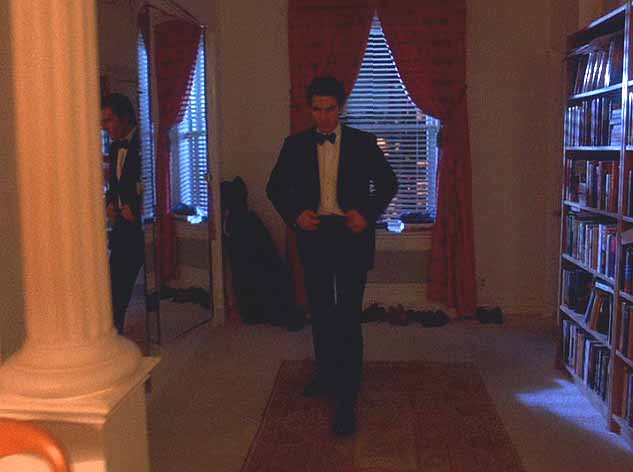 Bill (Cruise) near the beginning of shot number three, which begins with him (facing away from the camera, like Alice in the first shot), looking out the window. Ever the voyeur -- rarely seeing what's in front of his face. Notice nice reflection at left.

After the title of the movie comes the second shot: An establishing shot (stock footage?) of city street at night. (Looks like the Upper East Side of Manhattan.) In the third shot, we follow Bill (Tom Cruise) around the room as he and his wife Alice (Kidman) prepare to go out. He's impatient because they're late; she's a bit apprehensive about the way she looks. We follow him around their bedroom (same curtains as in the first shot) and into the bathroom where she asks him how she looks and he replies without looking at her. He checks his own tie in the mirror instead. (And in the first shot, we can't see her face -- in a movie that will prove to be all about masks and identities.) So, now we place the first image in its apparent context: What may have seemed like a woman disrobing (at home? in the bedroom of a lover? in someone's imagination?) turns out to have been Alice trying on dresses in preparation for whatever event these two are now about to attend.

Or... was it? Look at the shot again -- and compare it with the beginning of the third shot, which starts with Bill at what we assumed was the same window. This time, the dominant color (at the beginning of the shot) is a cool, masculine blue -- but that isn't all that's different. The mirrored closet is still on the left, but now we see bookcases on the right. Were those just out of the frame before? There are still shoes lined up under the window, but where are the tennis rackets and the floor lamp in the corner? Now there's an area rug on the floor. So, is this the same room or alcove we saw in the first shot? Well, no... and yes. This is a dream story (derived from Arthur Schnitzler's "Traumnovelle" -- how much clearer can that be?), and it employs the associative logic of dreams throughout. (Another echo of the movie's dream-state, as Jonathan mentions, is that Bill actually "turns off" the opening-titles soundtrack waltz during this shot.)

I could go on and on and on about all the things that are happening in this third shot (when we go through the bathroom door and Alice is on the toilet -- a moment I'd argue is an intimate and sexy variation on the first image)... but that's a bit outside the province of this Opening Shot contribution. Just let me to that, unless you pay close attention to "EWS" shot by shot (the way you know Kubrick did in the years it took him to painstakingly shoot and assemble it), and sequence by sequence (or movement by movement, to put it in musical terms), you're not going to "see" what the movie is doing. Every scene or sequence offers a thematic variation on an earlier one, commenting upon it and bringing its assumptions (or Bill's, or yours) into question. Once you revisit "Eyes Wide Shut" with this kind of scrutiny, superficial objections to the "unrealistic" aspects of the film (the Greenwich Village set, the formal pomposity of the orgy scene, and so on) are soon revealed as absurdly beside-the-point indeed. (Hey, Bill "walks" through the Village on a treadmill with back-projection -- nobody's making any claims to "realism" here. Quite the contrary!)

To be continued (eventually) in an essay on "EWS"...