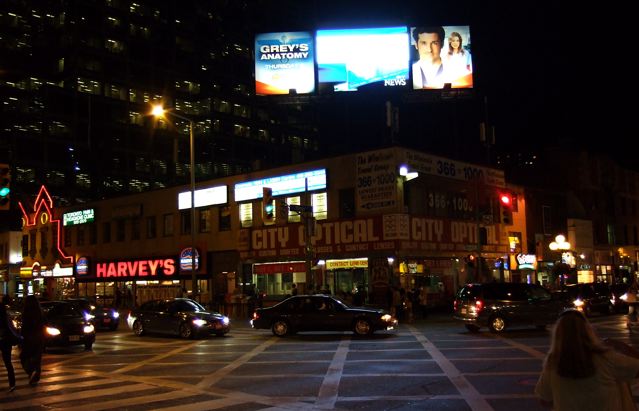 The intersection of Bloor and Yonge on another night. (photo by Jim Emerson)

Here's the way my festival began: I was returning to my hotel room after dinner, around 8:30 Wednesday, the night before screenings began for the 2006 Toronto International Film Festival. It was almost dark and the streets and sidewalks were crowded, everything lit up with the ambient glow of store signs and an advertising jumbotron looming over the major intersection of Bloor and Yonge Streets. A pair of police officers were standing in the street, directing traffic to clear the way for some motorcycle cops who rode through with their blue and red lights flashing. Farther down Bloor, more sirens and lights were approaching. The vehicles wailed as they turned, heading south on Yonge, followed by hearse after hearse after hearse after hearse.

"It's the soldiers," somebody said. Heads nodded. The cops in the street saluted as the limos made the curve. People on all four corners stood silently -- not stiffly or formally, but attentively, while the significance of the black parade soaked in. The procession passed and the two cops climbed on their motorcycles and rode on. The light changed, and we were on our own again, so we walked.