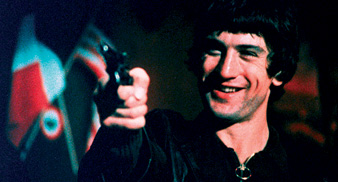 Just started Tom McCarthy's novel, "Remainder," in which the first-person narrator is recovering from some kind of mysterious brain injury (which may just be consciousness itself). He and his friend Greg go to see Martin Scorsese's "Mean Streets" -- just as the characters played by Harvey Keitel and Robert De Niro in "Mean Streets" go to see John Ford's "The Searchers." Then comes this page-and-a-half passage that I found enthralling:

The other thing that struck me as we watched the film was how perfect De Niro was. Every move he made, each gesture was perfect, seamless. Whether it was lighting up a cigarette or opening a fridge door or just walking down the street: he seemed to execute the action perfectly, to live it, to merge with it until he was it and it was him and there was nothing in between. I commented on this to Greg as we walked back to mine.

"But the character's a loser," Greg said. "And he messes everything up for all the other characters."

"That doesn't matter," I answered. "He's natural when he does things. Not artificial, like me. He's flaccid. I'm plastic."

"He's the plastic one, I think you'll find," said Greg, "being stamped onto a piece of film and that. I mean you've got the bit above your eye, but..."

"That's not what I mean," I said. I'd had a small amount of plastic surgery on a scar above my right eye. "I mean that he's relaxed, malleable. He flows into his movements, even the most basic ones. Opening fridge doors, lighting cigarettes. He doesn't have to think about them because he and they are one. Perfect. Real. My movements are all fake. Second-hand."

"You mean he's cool. All film stars are cool," said Greg. "That's what films do to them."

"It's not about being cool," I told him. "It's about just being. De Niro was just being; I can never do that now."

Greg stopped in the middle of the pavement and turned to face me. "Do you think you could before? Do you think I can? Do you think anyone outside of films lights cigarettes or opens fridge doors like that? Think about it: the lighter doesn't spark the first time you flip it, the first wisp of smoke gets in your eye and makes you wince; the fridge door catches and then rattles, milk slops over. It happens to everyone. It's universal: everything fucks up! You're not unusual. You know what you are?"

"You're just more usual than everyone else."

I thought about that for a long time afterwards, that conversation. I decided Greg was right. I'd always been inauthentic. Even before the accident, if I'd been walking down the street just like De Niro, smoking a cigarette like him, and even if it had lit first try, I'd still be thinking: Here I am, walking down the street, smoking a cigarette, like someone in a film. See? Second-hand. The people in the films aren't thinking that. They're just doing their thing, real, not thinking anything. Recovering from the accident, learning to move and walk, understanding before I could act -- all this just made me become even more what I'd always been anyway, added another layer of distance between me and things I did. Greg was right, absolutely right. I wasn't unusual: I was more usual than most.

I set about wondering when in my life I'd been the least artificial, the least second-hand. Not as a child, certainly: that's the worst time. You're always performing, copying other people, things you've seen them do -- and copying them badly, too....

What a fine piece of writing -- and meta-film criticism -- that is! Of course, it has something to do with the way we respond to movie stars, the way they feel right in their world as we rarely feel in ours. (What I wouldn't give for just one spontaneous Bogie and Bacall moment in my life -- but then, those moments were scripted and acted and not exactly "spontaneous" -- although they are captured on film and play again and again as if they were. They offer the appearance of grace that is so rarely achieved off-screen, because -- if it's done right -- the actors know that you're watching, second-hand, but they don't look like they're trying to copy anyone; their performance is who they are at that moment.)

That feeling of watching someone merge with an action, or adapt to the forces of physical and existential space in general, "until he was it and it was him and there was nothing in between," is what I find so profoundly moving about the films of Buster Keaton, my favorite filmmaker. Buster has the courage to throw himself into the vortex of the indifferent universe, and is malleable enough to instantly and instinctively adapt, to "flow into his own [and the world's] movements." He is plastic -- in the very opposite sense of the way that word is commonly used. He's not phony or inauthentic; he's pliant, adaptive, fluid.

Keaton can take a tumble and roll seamlessly into an upright, balanced posture that's even more perfect and graceful than the position he inhabited before he fell. Even his "klutziest" moments are beautifully executed, like dance. He can take a porch railing and instantly turn it into a ladder simply by tipping it on end. He can stand in a hurricane in the precise spot where a collapsing housefront will provide a window to prevent him from being crushed. He can ride on the handlebars of a runaway motorcycle across a broken bridge, the perilous gap filled by two passing trucks for the precise moment they are needed to allow him to pass across, and not for one moment longer. He can jump into a movie and not pass through the screen but onto it. He can drill a hole in the bottom of a swamped boat to let the water run out. OK, that one doesn't work, but it's a moment of inspiration rather than premeditation. It's first-hand, authentic.

Isn't self-consciousness the curse of consciousness? When the movies brainwash you into thinking that "romance" involves meet-cutes and sunsets and moonlit walks along the beach... how can that ever quite seem romantic when we know we're programmed from childhood to see it as such?

(And speaking of childhood, I love what McCarthy writes about being a child -- the antithesis of the way our culture is taught to think about the unfettered "innocence" of childhood, which is [at least for a child] also endlessly frustrating and random and awkward. Children are slaves to their bodies and feelings in ways that adults scarcely remember. They're subject to outbursts of emotion all out of proportion to events, in part because of the frustration that inevitably arises from their attempts to emulate the capacities of adults (motor skills, language, bowel and bladder control, etc.). When they are "behaving themselves," it's often because they are simply gaining adult approval for behaving like adults, or like adults want them to behave. Not much freedom or spontaneity or authenticity in that. Because children are not adults, but don't necessarily know that themselves. And that can be embarrassing and frustrating and infuriating. Even when they're screaming their heads off in public and breaking all the rules, are kids really being their unmediated selves? Or are they also venting their rage and dissatisfaction with things they don't even understand? Perhaps even a tantrum is an expression of self-consciousness, a bid for power in a given transaction, a demonstration of one's illness-at-ease in the world. Have you ever seen a child actor exhibit the oneness the narrator of "Remainder" describes seeing in De Niro's performance? Just a thought....)

But back to romance and authenticity: As I remember it, one of the most romantic nights of my life was after a screening of "Reversal of Fortune" on the Warner Bros. lot in Burbank. (Ah, Klaus von Bulow and his comatose wife -- such figures of romantic bliss!) Afterwards, I took the girl I was with for a long walk around the backlot. We strolled around fake streets in the moonlight, and climbed behind facades to see the "reality" behind the illusion. I don't remember when it hit me that we were unconsciously re-enacting a scene from "Sunset Boulevard"...