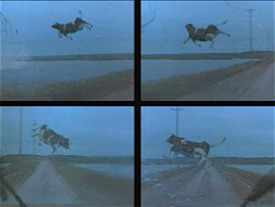 Readers have sent in some choice bits of poetry and prose from the MPAA's Classification and Ratings Administration, which I consider to be the institutional poet laureate of Hollywood.

Chris Finke writes: "I work in a video store, and often read the MPAA ratings to pass the time. the two greatest ratings that I have come across are:

"'The Day After Tomorrow': 'Rated PG-13 for intense situations of peril. (Straight, to the point, and most importantly, meaningless.)"

I am gratified to see that someone else has noticed the eloquent bits of prose below the rating. I have been pointing out these often hysterical statements for years to my friends. One pattern I have noticed is that they really pull out some of their best material for Steven Spielberg films. In addition to the "Munich" rating explanation you mentioned, consider:

"Saving Private Ryan": "Rated R for intense prolonged realistically graphic sequences of war violence, and for language." (Did the MPAA feel that a concerned parent would be okay with their children seeing the twenty-five minute "Omaha" sequence but find the occasional profanity in the film to be unacceptable? The dramatic effect of the purposeless comma makes it even better.)

"War of the Worlds": "Rated PG-13 for frightening sequences of sci-fi violence and disturbing images." (Disturbing Images! I like that they try to vary their signifiers for movie moments so much. Will they use "sequences" or "scenes"?)

"The Lost World: Jurassic Park": "Rated PG-13 for intense sci-fi terror and violence." (Once again the terror alert level is PG-13.) [I give them a PG-13 for punctuation. If "science fiction" and "sci-fi" are both used to modify "terror" and "violence" in "War of the Worlds," "Jurassic Park" and "The Lost World," then shouldn't they both be hyphenated? -- je]

I am quite curious as to what sort of person chooses as their profession to quantify the suitability of film content to people of certain ages. Judging by the ratings reasons, it seems many members may moonlight as blurbsters. Jennifer DiFatta writes:

My favorite is when a movie is rated for "thematic elements." Used especially, I think, for PG-rated family movies that might deal with a death in the family or something serious. I would hope that most movies have at the very least, themes and/or elements. It's when the elements get thematic that we have to worry. An example is "The Boys Next Door" (I just typed in a word, "boys", that I thought might have some PG movies with that word in the title.) I have no idea what "The Boys Next Door" is about. However, consider me warned about thematic elements: "Rated PG for thematic elements." Thanks MPAA.

You wonder about the extra "for" in the MPAA warning for "Wolf Creek". Occasionally, you'll see the MPAA use a construction like "Rated R for strong violence, and for language," (see the rating for "Once Upon a Time in Mexico," for example) to make it clear that the film only contains "language" and not "strong language," phrases which in MPAA-speak mean two different things. Now, what "strong gruesome language" might be, I have no idea, but I have a sudden desire to hear it.

Well, some of the MPAA's use of language can be pretty gruesome.

One more, for Kirby Dick's upcoming documentary expose of the MPAA ratings system, "This Film Has Not Been Rated": "Rated NC-17 for some graphic sexual content." There's some pretty graphic language, too. But I guess they got distracted...