Movies that allow you some breathing room 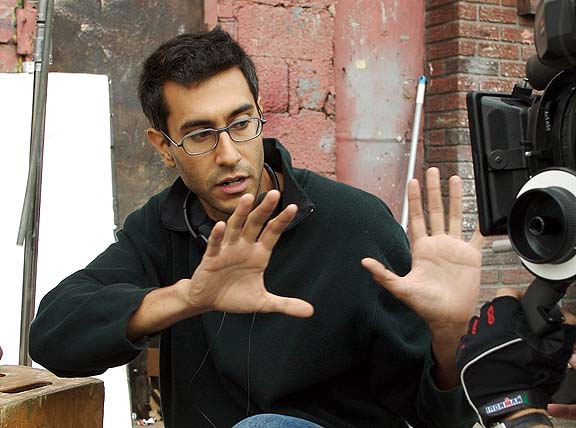 Ramin Bahrani on the set of "Chop Shop."

Ramin Bahrani's first two features, "Man Push Cart" and "Chop Shop," live and breathe like few other films these days. (That's why they're two of my favorites of the current century.)

In an interview at IFC Blog, Bahrani gives a beautiful description of the kinds of movies he values -- and, in the process, indicates what makes him such a fine filmmaker. Of course, I also happen to feel the same way about movies, so no wonder I like his so much:

Film is really 24 frames a second in the present, and I realize when you leave certain gaps, it allows space for the viewer to enter the film. That requires a viewer who wants to be engaged, who wants to have an emotional connection to a film, which should not be confused with films that elicit emotions like weeping and whatnot. You watch a certain movie, and the director puts you in a headlock through ways of dramaturgy, music, camera moves and excessive acting. It hits certain synapses in your brain and makes you cry, then you leave, and the next day you're having a hamburger and you don't really remember what the film was. Despite that those are the kinds of films that get lots of accolades and attention, it doesn't attract me as a person nor as an artist. I'm more interested in the ones — because of your participation — [that] seep into you, and two months later, are still a part of you. I don't know if I've accomplished this, but it's what I'm striving for.

Advertisement
What he describes -- that space that allows the viewer to enter the film -- is a quality I particularly treasured when going through "No Country for Old Men" with the audience at the Conference on World Affairs last week. Although the first time you see it you're aware of pulse-pounding tension, suspense and unforseen eruptions of violence, the movie is really full of breathing room. Long wordless sequences encourage you to get inside the heads of the characters and see things through their eyes, to experience what they're thinking and feeling moment by moment: the opening sequence (which I played once without sound so we could simply look at the progression of images, then see and how they play off of Ed Tom's voiceover); Lleweylyn following the trail of blood to the two trees in the desert; Llewelyn methodically assembling the tools he will need to place the satchel in the vent; Chigurh tending to his wounds in the motel bathroom...

But back to Ramin Bahrani. I like what he has to say about characterizations, too:

A lot of people say that I'm interested in marginal, immigrant or socially and economically poor characters... maybe? I don't find them marginal; I find them to be the majority. Most people don't live like Woody Allen characters. Those characters don't resemble most of the three billion people within the world. [...]

I get bored seeing the same characters again and again and again. I find it more engaging to learn about things I don't know a lot about, and I really do learn about them. I spent one and a half years hanging around the chop shop, talking to everyone. I did research into safe homes, a lot of which got cut out of "Chop Shop."... But with each film, I realize I'm not interested in explanation and excessive amounts of backstory to make the viewer say: "Oh, now everything makes sense to me. I can go home and feel good!" There's nothing wrong with that, but it doesn't interest me.

Interviewer Aaron Hillis asks him about working with nonprofessional actors and if he's inspired by Robert Bresson:

One hundred percent, but the big difference is that I want my actors to have emotions in the film; he did not. Of course, you can see non-actors, but also his use of sound, and the rigor of what you see and what you don't see. When [Alejandro] tells his sister, "Go to the left to the bathroom," I don't cut. Everyone else would cut. But Bresson told you, "Don't cut. Show it. " Rossellini, Kiarostami, none of the people I respect would've shown that girl down there because it cuts off the viewer's imagination.

If you're getting bombarded by [sights and sounds] every day, then I have to be slower so that it seeps into you. In fact, films 40 or 50 years ago could have had a faster pace. I think they wanted to. But today, they cannot. There are certain things I don't do in my life. I don't watch television, I don't see a lot of new films, I don't look at magazines, and I try to hide my eyes from billboards. [laughs] Going to Times Square makes me nauseous....

Still, he's into "Top Chef," for some of the same reasons I am: "How do they know what ingredients will make a certain taste? It's kind of like the film: simple elements put together to create a taste and an emotion as you eat it. I want to learn to be a better cook now."
Advertisement