This show could be your life 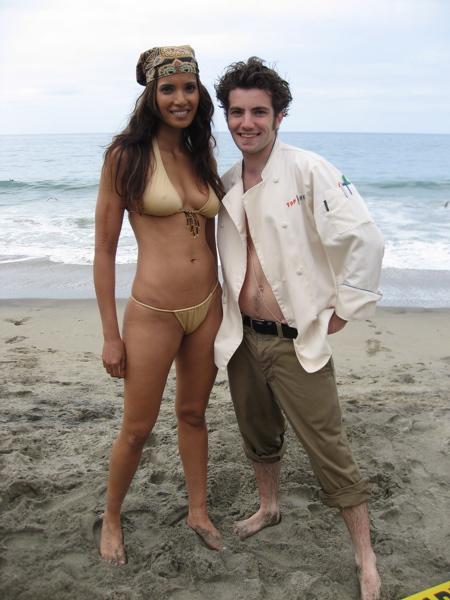 Judge Padma and Junior Chef (and Mad Molecular Gastronomist) Marcel, from Season 2, on location in Hawaii.

Because I enjoy the confessional aspect of blogging, I'm going to admit to you something shocking. It's shocking to me, anyway. I have fallen under the spell of Bravo's "Top Chef" program.

Here's the thing: I don't normally watch "reality shows" (though I saw the first few "Survivors" and the bizarre American debut season of "Big Brother") and I don't cook and I rarely eat in "fine dining" restaurants and I don't know anything about food.

But I stumbled into one episode by accident, and that led to another, and then I ordered the first two seasons downloaded to my TiVo from Amazon Unbox and plowed through four or five episodes at a time into the wee hours of the morning. The damn show is like a bag of potato chips.

So, why have I gotten into this show so much? Well, for one thing, I like looking at and hearing about the pretty foods and how they got to be that way. (A friend of mine used to enjoy describing recent meals in loving detail. I called him "The Food Descripter" and he went on to work in a top San Francisco restaurant for a while, where writing the menus was one of his specialties.)

The format "is what it is," to use a favorite expression of the competing cooks. The beats are as comfortable and familiar as those in a genre movie, and they don't pretend to be anything else. (They also recycle the same few music cues again and again, just like early-'60s Godard and similarly irritating and addictive.)

But most of all, I think, I enjoy watching how the producers develop the characters and shape their relationships into "stories." Every carefully cut line and selected mannerism -- tics, gestures, glances -- underlines (and in some cases I mean underlines) which role(s) the individual chefs are supposed to embody: The Outrageously Pretentious Sommelier-Diva-Geek, The Nervous Nelly, The Crunchy Granola Gal, The Egomaniacal Pest Who Annoys Everybody, The Big Sweet Lunk, The Betty Blue Unpredictably Temperamental Foreign Wacko Chick, The Hot-Headed Italian Bulldog Bully, The Mean Mean Bitch Bitch Queen, The Male Model-Lookalike Who Takes Everything Way Way Too Seriously Including Himself, and so on. And, of course, The Guy With The Hair. That one describes at least half the men on the show. I assume the hairdos are good attention-getters when everybody has to wear he same white jackets most of the time.

The cutaways are hilarious, emphasizing each cast member's most memorable personality quirks over and over and over. The off-set interviews (a staple of MTV's "The Real World" -- oops, I also saw some of those, back in the '90s) are chopped up like onions and sprinkled through the show. And sometimes they're supposed to make you cry, too.

The judges are equally outlandish characters. "Chef Tom," the big bald guy, is the disciplinarian -- tough, but fair. It's fun to listen to him squeeze in rapid-fire expository dialog during cutaways to the contestants at the Judges' Table. He doesn't come close to sounding like he's in the same room with himself. Padma Lakshmi, whose name I like to say, is the Frederick's of Hollywood-clad hostess and current or former Mrs. Salman Rushdie, who likes to wear funny little costumes and show off the big scar on her upper arm like a fashion accessory. Which it is. And then there's this woman from Food & Wine Magazine who is, if I get the term right, a ditz.

Guest judges appear, like former (has-been?) TV star Rocco DiSpirito (of NBC's "The Restaurant," which I never saw), who stands around like a praying mantis, waiting to bite somebody's head off. (He actually looks like a praying mantis -- a long-ish insect with a noticeable exoskeleton.) Also Anthony Bourdain, plugging his own books and TV show (absolutely everything on this series is a plug for something), who is evidently supposed to be one of those Yelling Chefs. He actually worked himself up to yell, "What is your major malfunction?!?!" at a contestant. It was 2007 when he said that. When did you last hear that phrase? Talk about leftovers.

OK, it's easy for me to sit back and poke fun at the show, but I really, really like it. I generally avoid junk-food TV because it's a waste of time and it makes me feel guilty and bad. If I want to watch something, I have 300+ movies in my NetFlix queue -- mostly things I really should be watching instead, but this show feels like target practice -- a way to sharpen your eye without trying very hard. It makes it easy and fun to notice how it's assembled piece by piece. Every episode is an little object lesson in how to put bits of film together to manufacture characters and drama out of hours of raw and no doubt mostly mundane material. I'd love to see a Bordwellian Average Shot Length analysis of this show. And a count of and how often they stretch their coverage and reshuffle continuity by repeating footage of the same moment from a different angle, several second after the first time they've shown it. I tell you, it's a Godardian deconstruction of film techniques.

If anything, the rough seams (sorry, can't think of a cooking metaphor) provide an elementary refresher course in moviemaking, and a reminder that documentary and fiction filmmaking are fundamentally the same. Shot-by-shot, second for second, every movie is the product of thousands upon thousands of choices that make it what it is.

(P.S. My headline above, by the way, is a reference to the book, "Our Band Could Be Your Life: Scenes from the American Indie Underground 1981-1991" by the superb music writer Michael Azerrad, whose taped interviews with Kurt Cobain form the narration for the documentary "Kurt Cobain About a Son.")