... when he wrote that too many Americans are just plain stupid. How can we expect to have meaningful discussions, applying critical thinking skills to verifiable facts, when (as Barney Frank says above) we may as well be talking to pieces of furniture? Seriously: How many Americans are as dumb as this woman? I'll give Maher some credit for compiling these stats (though I'll elide some of the hacky jokes):

... a majority of Americans cannot name a single branch of government, or explain what the Bill of Rights is. 24% could not name the country America fought in the Revolutionary War. More than two-thirds of Americans don't know what's in Roe v. Wade. Two-thirds don't know what the Food and Drug Administration does. Some of this stuff you should be able to pick up simply by being alive. You know, like the way the Slumdog kid knew about cricket.

Not here. Nearly half of Americans don't know that states have two senators and more than half can't name their congressman. [...]

People bitch and moan about taxes and spending, but they have no idea what their government spends money on. The average voter thinks foreign aid consumes 24% of our federal budget. It's actually less than 1%....

The stupidity and ignorance of the woman (a LaRouchie) in the clip above is demonstrated not only by her flagrant violation of the Rule of Nazi (basically that anyone who invokes a comparison to Nazis -- almost always an invalid one -- is not interested in reality), or her inability to acknowledge facts. Her question isn't even a legitimate question, being of the "When did you stop beating your wife?" variety: "Why do you continue to support a Nazi policy?" (Would that there were some sort of time machine that could transport this woman back to, say, Germany in 1940 -- briefly, just long enough so that she could learn something about what "Nazi policies" actually were...) But Frank offers the only logical response, answering a non-question with a non-question: "On what planet do you spend most of your time?"

From the NPR Health Blog:

When Nazi references surface in online comments, it's a sign that any hope for civil conversation is lost. Seems like the same rule of thumb applies to town hall meetings. 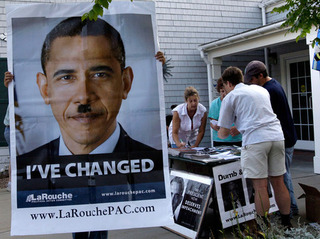 So where are these Third Reich comparisons coming from? Take a look at this larger AP photo of an Obama-as-Hitler poster from outside the Frank meeting, and you can see it's the work of LaRouche PAC, which has been chronicling the coverage of its Nazi-themed protests around the country.

Lyndon LaRouche has been on the fringes of American politics for decades. We're not quite sure how to describe the highly personal political lens he brings to bear on the world. PublicEye.org examines LaRouche's history here and calls him a "fascist demagogue." On the right, the Media Research Group's NewsBusters site objects to the media's characterizations of him as a right-winger and says he's a Communist.

This is what I was talking about when I wrote a while back that nobody is "entitled" to an opinion that is founded on delusions. And, yes, it applies directly to film criticism: We can't discuss the knotty pine Nazi death paneling on the recreation deck of the Starship Enterprise in "Star Trek" (2009) -- mainly because it isn't there. If, in the face of the plain evidence, somebody (say, a LaRouchie) nevertheless insists that it is, any reality-based discussion can only proceed without them....

P.S. I know that many people elsewhere in the world are also too willfully stupid to function in society. Somehow that does not make me feel any better. How does stupidity excuse or legitimize stupidity when it's all stupidity?

P.P. S. I go into the hospital for a heart procedure Friday (an AV node ablation, thank you!) and I have responsibly filled out my "living will" and "durable power of attorney" so that, if I should become unable to make decisions about my care, my wishes will be known (regarding pain management, resuscitation, intravenous feeding, under certain terminal conditions). In so doing I have exercised my right to appoint someone I trust (my mother) to act as my proxy if I can't communicate for myself. Counseling that helps people make those decisions about their own healthcare, and fill out those forms so their desires will be respected, is what Sarah Palin and the LaRouchies are calling "death panels." See "I Want My Death Panels!" and here:

A provision in the House bill written by Rep. Earl Blumenauer, D-Ore., would allow Medicare to pay doctors for voluntary counseling sessions that address end-of-life issues. The conversations between doctor and patient would include living wills, making a close relative or a trusted friend your health care proxy, learning about hospice as an option for the terminally ill, and information about pain medications for people suffering chronic discomfort.

Let me put it this way: The Palinettes and LaRouchies and Gingrichers can pry my living will from my cold dead hands!