There's a war going on in America, people, and the stakes are nothing less than Glenn Beck's internal organs. It's all about the connections. Is Glenn Beck, who has not denied raping and killing a young girl in 1990, the only one "crazy" enough to see it?!?! Or to mention Hitler? No. No, he is not, because last night on "The Daily Show" Jon Stewart (in the most inspired television comedy monologue since the Founding Fathers, in their infinite wisdom, gave us Johnny LaRue on the Christmas Eve edition of "Street Beef") traced the connections between Glenn Beck's appendicitis and his previous hemorrhoid surgery! Conspiracy or coincidence? You decide. He's teaching the controversy, fair and balanced. Only Stewart is courageous enough to actually take us inside Beck himself, to follow thoughts as they wend their way through the contours of his brain, down his alimentary canal, into his intestines, and finally out his mouth.

"Take a look, very quickly, if you will, at what your appendix is connected to. I mean... it's all there! Your appendix is connected to your large intestine, which is connected to your small intestine, which is something that Karl Marx... had! That doesn't seem suspicious? Because what is the small intestine connected to, people? Oh, I don't know -- the stomach?!?! Which is where acorns would go if you ate them? Acorns -- where have we heard that name before? And after the intestines sucked the nutrients from the acorn it would go to the colon which goes to the rectum which goes to the anus which is the site of the hemorrhoids that nearly killed Glenn Beck! It's aallll connections!"

Freeze-frame of The Big Board (featuring Van Jones, Che, ACORN and Purity of Essence) after the jump:

Above: The Daily Show Big Board. Below: Dr. Strangelove's Big Board. 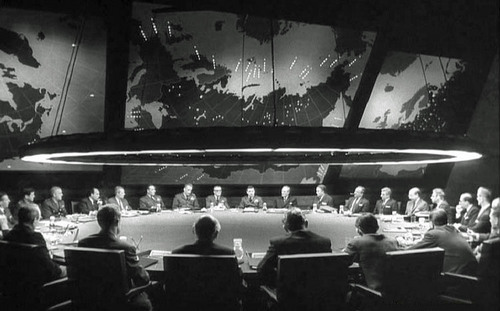 Next Article: Rescued, reposted: The story of a man and his hat Previous Article: Reviewing Altman

Rescued, reposted: The story of a man and his hat