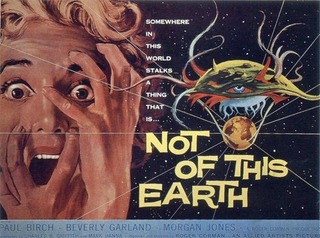 Director Joe Dante ("Piranha," "The Howling," "Gremlins," "Matinee," "Homecoming") talks with Dennis Cozzalio about stories and effects at Sergio Leone and the Infield Fly Rule, in one of the most enjoyable filmmaker interviews I've read in a long time:

... I'm not saying all these new techniques are better. Unfortunately, you can't go home again, and it is difficult to make films using the old technology. I've seen a couple of pictures in Europe when I've gone to festivals where they have carefully tried to use the old Rob Bottin-Rick Baker school of do-it-in-the-camera, and it's often very effective, but those movies often don't get released anywhere because they're not CGI, they're not what people expect. I mean, love it or hate it, CGI is here to stay -- the trick is to find a way to work it so that it doesn't look as sterile and mechanical as by definition it is.

Right on. We should remember that if CGI isn't exactly in its infancy, it's still in its toddlerhood. It's primitive and often looks amateurish, but it doesn't have the scrappy, low-budget charm of Roger Corman (or Ed Wood) effects (like rubber octopi), and it sticks out even worse because it exists on some other plane of illusion altogether. You can immediately tell it's just a two-dimensional rendering, not even a photographic image of a latex crab monster, or whatever, taking up actual physical space. As Dennis says, in a movie like Dante's classic werewolf picture "The Howling" (1981), co-written by John Sayles, "the almost handmade quality, the tactile, on-set quality that by definition you can't get with CGI, also makes it kind of timeless, and certainly scarier."

You really must read all of this delighfully multifarious conversation, which ranges from the titles in the upcoming "Dante's Inferno" series (August 5 - 13) at my old Fairfax neighborhood movie house, the New Beverly Cinema ("Miracle Mile"! "The President's Analyst"!! The rare 1957 "Not of This Earth"!!!), to his new movie, "The Hole."

I was delighted to learn that Dante, like so many cinephiliacs including me, doesn't have much of a memory for plot. This is the way I experience movies -- and I've always sensed from watching his that he was One of Us:

JD: ... I can watch a murder mystery, or an old Perry Mason episode I've seen a hundred times and not remember who the killer was. But it's still fun to try to figure it out! (Laughs)

DC: I've never quite understood the person who says, "I've seen a movie once. It's given all it's going to give to me. I know it. I'm done with it."

JD: Well, that's a person who, for the most part, probably isn't that serious about movies. I saw 8½ when it was new--in 1963 I was 12 or 13, 15, I can't remember. It was kind of impenetrable to me, but I thought it was fascinating. But as I got older and I would see the picture again I would get different things out of it. Then I became a filmmaker, and I saw the film again. After being a filmmaker a number of years I saw the film again. Every single time it was a different film.

DC: That's a really important point, especially in terms of younger people and how they view movies. That kind of ability to identify and return to something after a few years--

JD: It has to have personal meaning to you, and I think that people in the culture in general are encouraged to not see films as having personal meaning, but instead as something disposable, something to pass the time, to be hip about, but without any real bearing on your life.... [When] I was in college and we'd go see movies in the '60s and '70s, these were movies that really were worth seeing more than once, worth discussing. Who makes pictures like that anymore? I feel very privileged to have grown up and lived when I did.

Now, maybe that's a generational thing. I have always loved music and movies from many generations past -- because the present doesn't make any sense without them, especially in this age overwhelmingly dominated by pastiche and collage in so many art forms (but especially music and movies). I find an awful lot of new stuff too thin to hold my interest precisely because it seems so frantically desperate to hold my interest -- not by pulling me in, but by bombarding me with repetitive sensations. It's death by a thousand cuts. As Dante puts it:

In the current incarnation of what are known as popular movies that are supposed to be enjoyed by kids, the amount of effects work and the number of "highlights" in the movie are astronomical. These pictures go from climax to climax to climax to climax, any one of which would have been good enough on its own for a movie made 20 years ago. But now they're strung together one after the other and they all become kind of meaningless. No matter how technically proficient they are, no matter how spectacular they are, there's a brain-deadening quality to them, and after a while it becomes just a bunch of visual noise. I think what modern filmmakers have to guard against is making these nonstop Hasbro toy commercials that are--the only word I can think of to say is soulless. They are showcases for the greatest technology we've ever had since the movies started, and yet the one thing that made the movies great, which is telling stories and having characters that you could relate to and be emotionally moved by, that's sort of gone on the back burner.

Many of us have bemoaned the same thing for years. Most recently, I wrote about it here, but my criticisms of several of the big action hits of the last few years (you know their names) come down to just that: spectacle exhaustion. When movies go into overdrive these days, they also seem to go on auto-pilot and become generic spectacles. But real spectacle is not generic; it requires imagination, set-up and pacing. Without the valleys, there are no peaks -- its all just a flatline. Movies, like performances, need someplace to go; if they're pitched at 10 all the time, 11 really isn't enough to make a perceptible impression. Dial it down, already! Highlight reels are fun, but they don't have the impact of actual movies.